Corvette Racing at Le Mans: Plenty of work – and rain – on Test Day 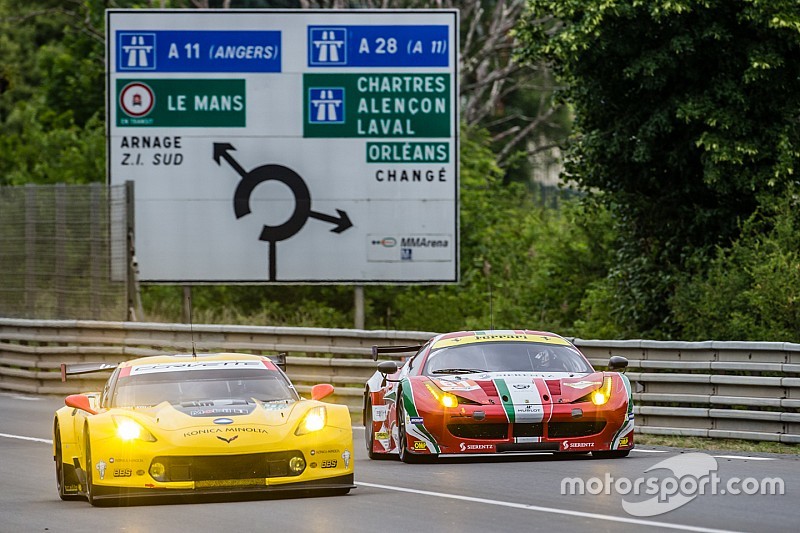 Le Mans, France – Corvette Racing’s two Chevrolet Corvette C7.Rs ran through a trouble-free – although damp – Test Day program Sunday ahead of the 24 Hours of Le Mans. The No. 64 Corvette C7.R set the second-fastest time in the GTE Pro class thanks to Oliver Gavin’s lap of 3:58.162 (128.003 mph) as both Corvettes compiled 121 laps between them.

Sunday’s pair of four-hour session marked the only time cars throughout the field can run on the 8.5-mile circuit ahead of the first official practice on June 11. Gavin’s lap was only 0.093 seconds off the class-leading time.

So far the car feels good in the conditions we had today.

The No. 63 Corvette C7.R was ninth in class with Jan Magnussen’s lap of 4:00.549 (126.760 mph) also coming in the first session. There was just enough dry time in each session for cars to set quick lap times before the focus turned to wet running as a steadier rain fell in the second session. The changing conditions meant the Corvette Racing crew and engineers ran through a number of different setup and tire choices during the eight hours.

Gavin is sharing the No. 64 Corvette with Tommy Milner and Jordan Taylor, a new pairing for Le Mans. Gavin and Milner are full-season teammates in the TUDOR United SportsCar Championship and placed third to open 2015 in the Rolex 24 At Daytona. Taylor is back at Le Mans with Corvette Racing for the fourth season but first with Gavin and Milner.

Taylor, Magnussen and Antonio Garcia were second in class at Le Mans in 2014. Ryan Briscoe joins Magnussen and Garcia this season in the Australian’s first Le Mans with Corvette Racing. The trio won together at Daytona and the Mobil 1 Twelve Hours of Sebring. A victory at Le Mans would make them the first drivers in 15 years to win all three endurance races in the same year.

The 83rd running of the Le Mans 24 Hours is set for 3 p.m. CET/9 a.m. ET on Saturday, June 13. The FOX Sports family of channels will air the race with live coverage of practice, qualifying and the race on radiolemans.com.

Antonio Garcia, No. 63 Chevrolet Corvette C7.R: “It’s good to be back at Le Mans, as always. It was raining, but the weather here is always an important factor you have to calculate. So it’s good to some wet running under our belt today. So far the car feels good in the conditions we had today.”

Jan Magnussen, No. 63 Chevrolet Corvette C7.R: “All in all we’re at a good starting point, and I’m quite happy. We’re heading in the right direction and we know where we need to go. We had a good test at the Museum where we had found a good balance, and we’re now trying to find that back here but we’re not quite there yet.”

Ryan Briscoe, No. 63 Chevrolet Corvette C7.R: “I only did four laps (in the morning session) when there was some light rain already. I never pushed; I just wanted to have a look around and familiarize myself with the track again. In the afternoon session I got in a good number of laps. We’re pretty happy with the car. It felt a bit loose at the beginning but we worked on the setup and solved that. Apart from that it was just a matter of getting back in the groove and make our lives comfortable.”

Oliver Gavin, No. 64 Chevrolet Corvette C7.R: “The track was quite dirty and dusty (early). There are a number of areas of the track they’ve worked on – in the Dunlop Chicane and especially from Mulsanne Corner all the way through Porsche Curves, where they’ve lined the track with tarmac, which made it quite dirty. Still the grip level was pretty decent and the balance of the car quite good, so we managed to work through some aero stuff in the morning.

“The car felt reasonably balanced which was positive after the test we did at the National Corvette Museum, as it means we managed to translate our findings from there to here. The 2015 tire seems to be working quite well in the cooler conditions. We wanted to explore it a bit further but then the rain arrived.

“We’re also quite pleased with the way the car handled in the wet, so all in all we’re feeling pretty positive.”

Tommy Milner, No. 64 Chevrolet Corvette C7.R: “The conditions were a bit tricky at times. Still I got a good, solid 45 minutes in the dry when the track was good which gave me a good feel for the car. I also drove quite a bit in drying conditions, which was nice to find out where the track was slippery and where it was grippy. All in all I went through a wide range of different track conditions and tried the various tires for it. So we’re good for the race whatever the weather conditions will be two weeks from now. In the past few years it has always rained at some time, so we’re prepared.”

Jordan Taylor, No. 64 Chevrolet Corvette C7.R: “It was good to get back in the car in changing weather conditions. When I was in the car it was sometimes damp, sometimes dry, or both at different parts of the track, and then it started raining properly. But it was a good session in that we managed to work through different types of tires.”

Doug Fehan, Corvette Racing Program Manager: “Testing today was a mixed bag. But you come to expect that at Le Mans. It’s good preparation for the week of the race where I expect there will be a mix of dry and wet running. What we saw today is that we have fairly consistent Corvette C7.Rs in both types of conditions. There still is a lot of work to be done between now and next week’s first practice session. Winning Le Mans takes that level of preparation, as we know from our past successes here.”