Corvette Racing at Le Mans: All about preparation 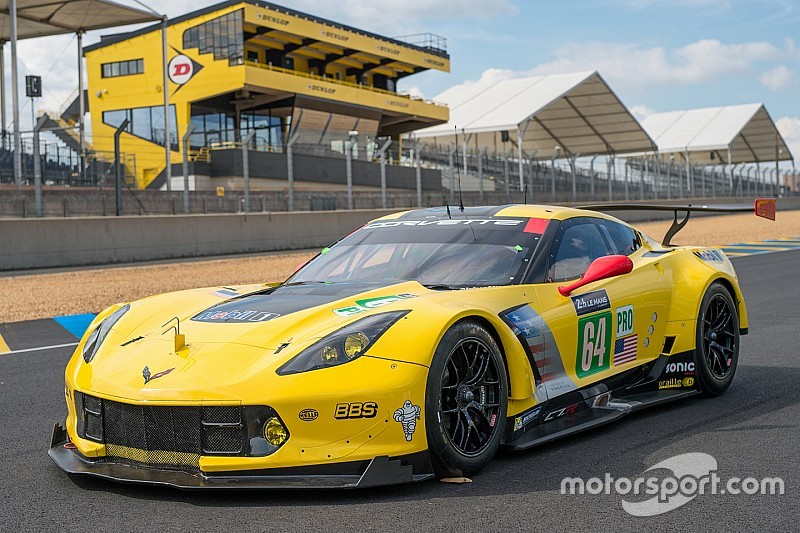 Detroit – Corvette Racing has returned to France for the first steps toward what it hopes is a ninth class victory in 18 consecutive appearances at the famed 24 Hours of Le Mans. The annual Le Mans Test Day on Sunday will give the team – and the rest of the field – eight hours of track time ahead of the twice-round-the-clock event.

The Test Day is broken up into a pair of four-hour sessions around the 8.5-mile Circuit de la Sarthe, which is a mix of permanent race track and public roads. It will allow Corvette Racing to validate findings from its own test at Road America earlier this month. All six drivers for the Le Mans program – Antonio Garcia, Jan Magnussen, Oliver Gavin, Tommy Milner, Jordan Taylor and Marcel Fässler – sampled the Mobil 1/SiriusXM Chevrolet Corvette C7.Rs in low-downforce trim and on Michelin tires specific for Le Mans.

With a number of positive developments from the test in-hand, focus turned toward making final preparations on the two Corvettes and sending them – as well as a collection of equipment – to Europe. As Corvette Racing has learned in nearly two decades, proper prep can only help in a race the magnitude of Le Mans. It certainly has helped the team win three straight events in the IMSA WeatherTech SportsCar Championship, where it leads the Manufacturer’s, Driver’s and Team championships in the GT Le Mans class.

Also helpful is the success that Corvette Racing has experienced in its previous 17 years. That includes eight class victories and a combined 18 wins for the six drivers.

Garcia, Magnussen and Taylor reunite together in the No. 63 Corvette C7.R for the first time since 2014 when they finished second together in the GTE Pro class. Gavin, Milner and Fässler – who share the No. 64 Corvette – have driven together for the last two years in IMSA’s premier endurance events with victories last season in the Rolex 24 At Daytona and Mobil 1 Twelve Hours of Sebring.

Following the Le Mans Test Day, Corvette Racing will complete final preparations for the 24 Hours of Le Mans on June 17-18.

Antonio Garcia, No. 63 Mobil 1/Siriusxm Chevrolet Corvette C7.R: “There is always something to learn in testing from previous years. Once again this year, we have learned and improved on some items. We ran through a few new ideas and ways on how to make the car faster around Le Mans, and getting used to the low downforce configuration. All the drivers were happy afterward and we were all fairly consistent. I still think we can optimize things a little more. I feel really good driving our car. I think I’m at my best at the current moment. But I hope there is more room to improve and make a little more difference to the team as I can. Every day I keep focusing on trying to go a little bit faster.”

Jan Magnussen, No. 63 Mobil 1/Siriusxm Chevrolet Corvette C7.R: “What’s most useful from a test like Road America is that you get to run through the same setups that you run at Le Mans. That way it isn’t a huge shock to the system on how the car behaves when you get to Le Mans and the Test Day. We were all quite comfortable in the direction that we are going. Everyone was pretty happy. But Le Mans is Le Mans. We don’t know what will be thrown at us when we get there. We’re well-prepared. There is a good feeling within the team of what we can do. Whether that will be good enough, only time will tell. We are all anxious to get going to see what kind of race it will be for us.”

Jordan Taylor, No. 63 Mobil 1/Siriusxm Chevrolet Corvette C7.R: “The test at Road America went really well. I only get to drive the Corvette a couple of times a year, so any track time is beneficial. It’s a little bit of an adjustment. But having guys like Antonio and Jan with me, it’s easy to look at their data and get an idea of what I need to do to get back up to speed. The whole team has been great working with me on that. But having two days at Road America was huge. It was great preparation and I felt really comfortable in the car after those days. I feel like I’m the best prepared I’ve ever been heading to Le Mans.

Oliver Gavin, No. 64 Mobil 1/Siriusxm Chevrolet Corvette C7.R: “The test at Road America was very positive. Everyone got lots of time on different specs of the Michelin tire. All the feedback was positive and heading in the right direction. Fundamentally the team is well-prepared. We seem to be in a really good spot in the way the team is running the races; there is good communication and data transfer across the cars, which is excellent. We’ve had Marcel in the car for Daytona and Sebring, and that has worked out very well the last couple years. The team has won three races in a row, and bringing that into Le Mans is only a good thing.”

Tommy Milner, No. 64 Mobil 1/Siriusxm Chevrolet Corvette C7.R: “There are always a lot of variables that go into Le Mans – track surfaces, weather and things like that. You’re never sure what you have until you get there. That’s why the Test Day is so valuable. I think we all came away from our test happy with how our car felt and we’re feeling pretty happy with our starting point for the Test Day. The engineers have done a great job with the package for the car this year and making it as nice to drive as possible for being in low downforce.”

Marcel Fässler, No. 64 Mobil 1/Siriusxm Chevrolet Corvette C7.R: “It was definitely different driving the car in the low downforce kit (at Road America). In the beginning, it was not too easy to get used to. How you approach corners is much different, but I have to say the car did feel very good. For Le Mans, it’s almost like I have a new track to learn ahead of this race. So many of the corners will feel completely different (than in a prototype). The fast corners like the Porsche Curves will be a different approach. With a GT car, you are moving more and braking more than I am used to. There are other corners that will be different as well.”

Doug Fehan, Corvette Racing Program Manager: “We are heading back to Le Mans for our 19th consecutive time, and it is always such an honor to compete there. The importance of what this event represents is something that isn’t lost on anyone at Corvette Racing. This isn’t just a race but a true event, and it is what we work toward all year long. The Test Day is important for everyone – the drivers, engineers, crew – to reacclimate themselves with the challenges Le Mans brings every year. We have positioned ourselves for what we hope is a trouble-free Test Day, and then we can turn our attention to preparing for the world’s greatest endurance race.”