Corvette Racing ace Antonio Garcia is to run a tribute helmet in the Le Mans 24 Hours for his late friend, mentor and business partner Adrian Campos, who died in January this year.

He couldn’t remain at the track due to a positive COVID-19 test (which turned out to be a false positive), so didn’t get to celebrate victory with teammates Jordan Taylor and Nicky Catsburg, which finished off a wretched month in which he lost his grandfather to COVID and also lost his dear friend, former F1 driver and highly respected junior formula team owner Campos.

Now Garcia has revealed that on Corvette Racing’s return to Le Mans – having missed last year’s race due to the heavily restricted travel permitted during the height of the pandemic – he will be running a special helmet that combines his own livery with that of Campos.

Garcia took time out from his Le Mans preparations to tell Motorsport.com why Campos became such a big influence in his life.

“I was driving since I was seven or eight and I started winning national or international karting championships since 1994. I won the World Karting Championship that year and that was the year that Adrian won the Spanish Touring Car championship.

"At the national prize-giving ceremony I met him, and after he retired from racing in 1997, that’s when he started building up his own team, Campos Racing. I was his first driver in ’98, racing in Formula Nissan, or Euro Open championship – the one that brought up to Formula 1 Marc Gene and Fernando Alonso.

“But I think I was probably Adrian’s very first driver, along with Gene. And ever since I drove for him in ’98, ’99, 2000 and then again in 2002 – my last season in single-seaters – he was my manager, too. He was looking after me. After a point, I was dealing with my own things, but Adrian was… my father in racing! Basically, I didn’t make any decision without talking to him first, even if the final decision was mine. It was a very special relationship.

“Then since 2015, I joined Campos Racing as a shareholder so I’m part of the team even now. So losing him in January was a big loss for me, and obviously a massive loss for his kids. He truly was a good man.”

Garcia’s Le Mans helmet for this year combines his own classy and simple livery (by 21st century standards) with that of Campos, whose design was even simpler – red top, white band, and a mildly stylized Spanish flag on the sides.

“Adrian’s helmet was very old-school, as you’ll have seen,” said Garcia. “It’s just basically the Spanish flag, and it’s still on all of his team cars – the Spanish flag going across the nose, ending in brush strokes.

“The week that Adrian died, one of his sons said to me that Adrian’s last race was Le Mans in 1997. I’m not sure if he even got to race that year because his car [a Pilot Racing-run Ferrari 333SP] retired so early, but anyway, that was Adrian’s final race as a driver. So this year his youngest son Lucas told me it would be great if I could race with his father’s helmet colors at Le Mans.

"I wasn’t very keen to drive with somebody else’s helmet, but without telling him, I thought, ‘Yeah, I’ll come up with some idea.’ And working with the same painter, designer he used back in ’98, ’99, 2000, we came up with something, along with his oldest son, Adri. He helped me merge the two designs, mine and Adrian’s.

“And I think it’s come out pretty good and pretty obvious – the sides are basically my helmet design on top of Adrian’s. I like this combination very much.”

Garcia says carrying the colors of his former mentor doesn’t add to the natural burden of representing a potential winning team at the world’s most prestigious sportscar race.

“I don’t think it adds pressure,” he mused, “I think it will just feel very special. Daytona, as I told you guys, was very emotional because I was driving there just two days after he died, and I talked to him almost the same day. He was talking to me about how happy he was that I was racing there, and he was asking what were the chances of us winning the race, and so on.

“So for sure, having 50 percent his helmet colors and design on my helmet I think will bring many emotions in my first runs at Le Mans, to know that somehow I am carrying him around the track where he retired from driving in 1997.” 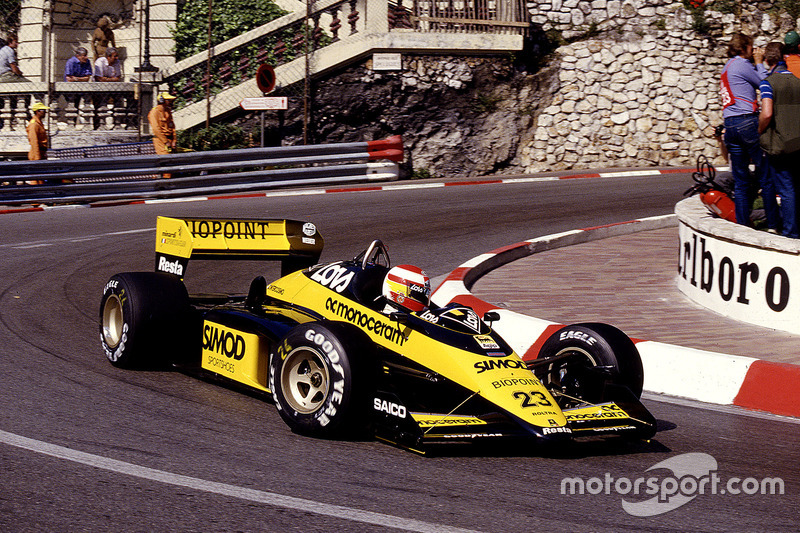 Adrian Campos in the Minardi M187 Motori Moderni during practice for the 1987 Monaco Grand Prix.