Corvette Doubles Up In GTE At Le Mans

Milner, Garcia’s stunning stints bring Corvette back from the edge

At the 2010 24 Hours of Le Mans, Corvette Racing crushed the competition in the incredibly tight GT2 class field, but fell victim to being in the wrong place at the wrong time when an overtaking Peugeot assisted in the leading Corvette C6.R going off the road.

In 2011, history nearly repeated itself. But after one moment of despair, the fortunes turned for the American team seeking its first win at Le Mans with its new GT2-spec C6.R built for its regular racing in the American Le Mans Series and ultimately, the 24 Hours of Le Mans. 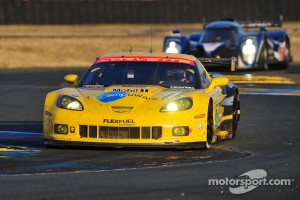 Thanks in large part to an epic comeback from Tommy Milner, making his Corvette debut at Le Mans and his first appearance at the circuit in four years, Corvette avenged its defeat to come back on top in the 24-hour sports car classic. Milner co-drove with Olivier Beretta and Antonio Garcia in the No. 73 entry to the win in the newly renamed GTE Pro class victory.

“That was the hardest drive of my life,” he said. “It would have been a lot easier if it hadn’t been sprinkling, raining, not raining, and then wet — all that plus the pressure of the situation.”

The No. 73 car took over as the single focus for Corvette once the leading No. 74, which dominated most of the race, had an awful accident which ruined its chances and took it out of contention.

Jan Magnussen, co-driving with Oliver Gavin and Richard Westbrook, was already racing with a lot on his mind this weekend as his wife is expecting very soon. Heading out of the Porsche Curves, Magnussen lost control and broke the car beyond repair. It lost drive and wound up in the gravel at Ford Chicane, damaged and retired for the day.

That was the hardest drive of my life.

From there, Garcia and Milner spent the last five hours of the race on a torrid charge to hunt down the No. 51 AF Corse Ferrari F458 Italia, which took the lead when the sister car had its issues.

Garcia, twice a previous class winner at Le Mans (GT1 with Aston Martin and Corvette in 2008 and 2009), set off on a pace of tracking down Toni Vilander in the Ferrari at roughly 1.5 seconds faster per lap. The car got back on the lead lap and after starting a minute and a half behind, began the comeback.

Once Milner took over he continued the charge, battling a mix of wet, misty and dry conditions, and still closing at a staggering rate of anywhere from six to 10 seconds a lap on the Ferrari. For Milner, this was the defining drive that may have gone largely unnoticed while the focus centered around the Audi/Peugeot battle for overall honors. Milner has yet to record an ALMS win — guessing a Le Mans 24-hour triumph will suffice in the interim.

“I’d been super comfortable in the car all day long, but I was not comfortable right then,” Milner said. “I was just trying to drive the car to what the track would allow. Every lap it changed, every corner it changed.”

Add to the equation that Milner and Garcia had to do more stints on their own as Beretta was sick after suffering from carbon monoxide fumes emanating from the safety car he was following. The Audi crashes, among others, interrupted the flow of the race and kept the safety car out in front of the field.

It was, by any stretch, redemption for the team that has been closer than ever to up-ending BMW in the U.S. this season and concerned with taking the win back at Le Mans. Milner joins Johnny O’Connell and Scott Pruett as American winners for Corvette Racing (since the team first came back to Le Mans is 2000, first win in 2001) at Le Mans.

Milner would have been thrilled to beat BMW, as he formerly drove for the German manufacturer. BMW has been off to a strong start in the ALMS with two wins from two starts, and in Le Mans with the Schnitzer-run BMW Motorsport effort the team took the pole position.

I was just trying to drive the car to what the track would allow.

But oddly, BMW had neither the pace nor the reliability to match the Corvette and Ferrari. Gianmaria Bruni in the Ferrari and Gavin’s Corvette passed Augusto Farfus within the first 15 minutes and BMW never got much closer to the lead all day.

The polesitting No. 55 car retired with was termed serious vibration issues; Farfus co-drove with Jörg Müller and Dirk Werner on that car. The No. 56, in contrast, spent time near the top of the leaderboard but went in-and-out of the garage with a consistent misfire.

Joey Hand ended his Le Mans debut in third place, two spots shy of completing his quest for a personal “triple crown” of sports car endurance race victories in 2011. Hand co-drove with his regular ALMS co-driver Dirk Mueller and Andy Priaulx in the No. 56 car.

Porsche teams Felbermayr-Proton and IMSA Performance Matmut netted top-five results with their No. 77 and No. 76 cars. While each of the European squads has a prior class victory at Le Mans (2010 and 2007, respectively), neither had the outright pace to contend with the Corvette, Ferrari, and BMW. Flying Lizard’s No. 80 Porsche made it home sixth in class, at least finishing after niggling mechanical issues.

The race also doubled as a double-points round of the Intercontinental Le Mans Cup for 2011, and ILMC entrants AF Corse and BMW Motorsport secured the top two points results for that. The No. 51 Ferrari, No. 56 BMW and No. 65 Lotus Jetalliance Evora were the top three for the new global championship.

Considering he viewed the race as a time to “take the tortoise approach,” this was a cracking result for Lotus’s No. 65 with Johnny Mowlem, James Rossiter and Jonathan Hirschi driving. Seventh place and a full 24 hours completed for the all-pro driver lineup could be considered stunning. 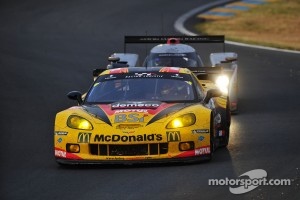 Elsewhere in the class, the rest of the six Ferrari F458 contingent had myriad issues ranging from mechanical to contact that blighted their charge. Neither the Dunlop-shod JMW Ferrari or Hankook Farnbacher Ferrari were near the top.

AF Corse’s second F458 was involved in the Mike Rockenfeller shunt and the Luxury Racing pair of F458s had some issues as well. Poor Anthony Beltoise will be remembered as the individual Allan McNish attempted to pass cleanly at an incredibly early stage of the race.

GTE Am ended with Larbre Competition doubling up its previous win in the GT1 class, with the last ride of the venerable Saleen S7.R at Le Mans 2010. Larbre stepped down to the new GTE Am category for 2011 with a two sets of three gentlemen drivers, and both a previous generation Corvette C6.R and a Porsche 911 GT3 RSR in the class.

Important was that Larbre took the win with its ILMC-entered No. 50 Corvette, driven by Patrick Bornhauser, Gabriele Gardel and Julien Canal. Canal and Gardel were part of the winning Saleen effort in 2010 along with Roland Berville. The No. 70 of Christophe Bourret, Pascal Gibon and Jean-Phillipe Belloc finished second.

In third, one of the great stories at Le Mans in recent years: Robertson Racing with its Doran Ford GT-R. The Robertsons, husband-and-wife team of David and Andrea Robertson along with their good friend and professional co-driver David Murry, have secured a podium finish on David and Andrea’s wedding anniversary. 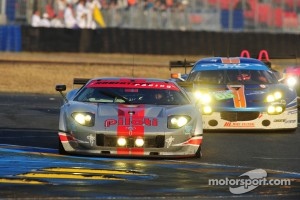 The Robertsons lost an engine earlier in the week. They had several spins. They ran out of fuel during Saturday’s morning warm-up when the fuel warning light didn’t come on and stopped on track. That was just before the race.

When you add in that the team’s paddle shifter system failed, they had to revert back to their sequential shift gearbox for the remainder of the race. Yet the Robertsons, led by team manager Andrew “H.” Smith and crew chief Lee Penn, have done it as one of the smallest teams in the race, making the finish and making the podium. A truly fantastic performance from the underdogs.

“Really we just didn’t make any dumb mistakes,” David Robertson said. “We finished, and that was the first step. Nobody made any mistakes. We survived the war of attrition. It’s a good start to hopefully being invited back next year and getting better.”