This year, in addition to a total of five victories by Chevrolet V6 drivers in the eight races run to-date, Team Chevy has four drivers in the top-five of the standings.

DETROIT – In 2012, the series of IZOD IndyCar Series oval track races in late spring and early summer was good for the Chevrolet IndyCar V6 teams. Thus far in 2013, with Tony Kanaan’s amazing victory in the Indianapolis 500 followed by Helio Castroneves win at Texas Motor Speedway, the trend appears to be repeating itself. 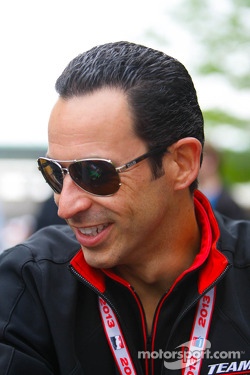 Next on the schedule is the Milwaukee IndyFest on the Historic Milwaukee Mile, the track where defending Series champion Andretti Autosport Team Chevy driver Ryan Hunter-Reay, began his amazing run to the 2012 title by capturing his first win of the season.

“The Milwaukee Mile is a unique track that requires great chassis setup and superb driver skill combined with oval track strategy and a strong, stalwart engine to end up on the podium.

So far, our Chevrolet drivers, teams and technical partners have shown they have what it takes to get it done, and they never-give-up despite setbacks. I am confident that trend and the momentum it has created will carry into Milwaukee this weekend."

This year, in addition to a total of five victories by Chevrolet V6 drivers in the eight races run to-date, Team Chevy has four drivers in the top-five of the standings with Castroneves leading the points followed by Marco Andretti, Hunter-Reay, the winner at Barber Motorsports Park, and Kanaan.

Two-time 2013 winner James Hinchcliffe is ninth in the standings. Chevrolet holds the lead in the IndyCar Series Manufacturers’ standings with 11 races remaining in the season.

Chevrolet in the IZOD Indycar Series - From the driver's seat:

HELIO CASTRONEVES, NO. 3 PPG TEAM PENSKE CHEVROLET, POINTS LEADER (ONE 2013 WIN): "Hopefully we can continue our good momentum from Texas and have a good run at Milwaukee. We will be racing the PPG Chevrolet this weekend so we are really happy to have them on board. We always seem to qualify well in Milwaukee in the Team Penske car and I love racing there with all of the history. It would be great to bring home a top-five finish to make sure we keep pushing for the championship."

MARCO ANDRETTI, NO. 25 RC COLA ANDRETTI AUTOSPORT CHEVROLET, 2nd IN STANDINGS: "Looking forward to heading back to The (Milwaukee) Mile for IndyFest this weekend. We have a lot of family history in Milwaukee; a pole and win would be a great Father's Day for dad (Michael Andretti). We're really focused on the championship with the RC Cola Chevy and closing the gap on Helio (Castroneves). Consistency will be the key for us -- but we're coming for a win this weekend."

RYAN HUNTER-REAY, NO 1 DHL ANDRETTI AUTOSPORT CHEVROLET, 3rd IN STANDINGS (ONE 2013 WIN): "There are a few racetracks on the IndyCar schedule that really stand out, and the Milwaukee Mile is one of them. The flat mile oval is one of the toughest tracks for a team and driver to get right, but when you hit the sweet spot it's hard for me to think of a more rewarding feeling behind the wheel. In 2012, (Milwaukee) IndyFest is where we started our championship run with a streak of three wins in a row. Now third in points, we're headed into the thick of the season determined to defend our championship for DHL and Chevy."

TONY KANAAN, NO. 11 HYDROXYCUT KV RACING TECHNOLOGY - SH RACING CHEVROLET, 4th IN STANDINGS (ONE 2013 WIN): "It's always good to go back to Milwaukee, a place that you really have to drive hard the car and be on your toes 100% of the time. I had some awesome races there in the past, including a couple of wins and last year's second place, so I think it's time to get the #11 Chevy back up there on the top of the podium and keep the good momentum of the Indy 500 win going."

JAMES HINCHCLIFFE, NO. 27 GODADDY ANDRETTI AUTOSPORT CHEVROLET, 9th IN STANDINGS (TWO 2013 WINS): "We were able to make the podium at IndyFest last year, and Ryan (Hunter-Reay) won, so I think as a team we're coming into Milwaukee with a pretty decent starting point. The last couple races haven't been stellar for the 27, so we're hoping to make up some points in Milwaukee this weekend, and get the GoDaddy Chevrolet back up front where it belongs."

WILL POWER, NO. 12 VERIZON TEAM PENSKE CHEVROLET, 12th IN STANDINGS: "I'm looking forward to racing at the Milwaukee Mile this weekend in the Verizon Team Penske Chevrolet. Milwaukee is a real driver's track because it's flat and you have to drive the car hard. We had a decent finish at Texas last week and we want to build on that this weekend to make sure we get another solid result on an oval and keep accumulating points. That's really what we need right now."

E.J. VISO, NO. 5 TEAM VENEZUELA PDVSA CITGO ANDRETTI AUTOSPORT HVM CHEVROLET, 13th IN STANDINGS: “Milwaukee is a track that I like very much. It’s definitely one of the ovals that has the most action being as it’s pretty much flat and very short. In the steering, normally we attack those two corners like any fast corners of a road course. It’s an amazing race to be involved with, and I’m very much looking forward to continuing the momentum that we’ve built in the previous races.”

ED CARPENTER, NO. 20 FUZZY’S VODKA/ED CARPENTER RACING CHEVROLET, 16th IN STANDINGS: “I have always liked the Milwaukee Mile. What is funny is that I never raced in USAC there. Even with all of my USAC midget, sprint car and Silver Crown experience. The schedule never went to Milwaukee. We raced sprint cars at Angel Park in Sun Prairie near Madison.

That was the closest. Last year, we didn’t qualify well at the Mile and I had to get a lap back on a restart in the middle of the race. Then the Fuzzy’s Chevy was good and we drove up through the field. We had a chance for a top-five but a late caution period ended the race. We had to settle for eighth.

The Mile is so legendary with all of the great drivers battling there for over 100 years. That track is older than Indy. Like IMS, it has tradition and the racing is usually good there. Coming off a fourth last Saturday night at Texas, I think we have a good opportunity to challenge for a win at Milwaukee.”

SIMONA DE SILVESTRO, NO. 78 NUCLEAR ENTERGY AREVA KV RACING TECHNOLOGY CHEVROLET, 17th IN STANDINGS: “I’m pretty excited to be going to Milwaukee; it’s one of my favorite ovals. So far we’ve been pretty strong as a team on ovals and hopefully we can have a really good result on the No. 78 Nuclear Clean Air Energy side this weekend. I was really happy with the performance of my Chevy engine in Texas and expect it will be just as awesome in Milwaukee.”

SEBASTIEN BOURDAIS, NO. 7 MCAFEE DRAGON RACING CHEVROLET, 21st IN STANDINGS: Well, last time I came to Milwaukee was in 2006, but I also won ! It has been a while and the car is different but I know how much fun this place can be when the car is right. Chevy is on top since the start of the season and I sure hope the n°7 Mc Afee/Variety team can finally raise its game and play at the front.

SEBASTIAN SAAVEDRA, NO. 6 TRUECAR DRAGON RACING CHEVROLET, 24th IN STANDINGS: "We leave Texas with another positive experience. We are moving towards the right direction and that has helped build up my confidence. I feel we have a very good momentum for the rest of the season.

There are a lot of race left, which gives us the opportunity to fight back into the Top-15 of the championship. Milwaukee is a place that I have a lot of good memories from Indy Lights and I would like to continue that this weekend. We are heading down the right path with the car and that should make for a good weekend in Milwaukee."

RYAN BRISCOE, NO. 4 NATIONAL GUARD PANTHER RACING CHEVROLET: “I felt like the team gelled really well when we worked together in Detroit and I’m sure we’ll be able to pick right up where we left off this weekend in Milwaukee. It’s obviously a very challenging racetrack and you need to get things right but Panther’s always had a great oval package and I’m excited to jump back into the National Guard Chevy and get back at it this weekend.”