Champion Racing headed the times in the warm-up for this weekend's 24 Heures du Mans. The Audi, driven by JJ Lehto, was quickest with a 3:36.078 lap in the 45-minute session. All cars took to the track under sunny conditions and, despite a few ...

Champion Racing headed the times in the warm-up for this weekend's 24 Heures du Mans. The Audi, driven by JJ Lehto, was quickest with a 3:36.078 lap in the 45-minute session. All cars took to the track under sunny conditions and, despite a few mechanical problems and off-track excursions, there were no major incidents. 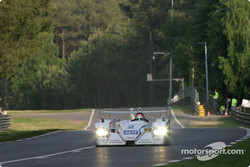 The LM2 class was headed by the Intersport Racing Lola Judd of William Binnie, Jon Field and Rick Sutherland. Fastest in the LM GTS class was the Corvette Racing C5-R of Ron Fellows, Johnny O'Connell and Max Papis. JMB Racing was quickest by half a second in the LM GT class with drivers Jamie Melo, Stephane Daoudi and Jean Renne de Fournoux.

The Gerard Welter WR car of Jean Bernard Bouvet, Tristan Gommendy and Bastien Briere (LM P1) class did not complete a flying lap after suffering from a mechanical problem and toured back to the pitlane early in the session.

The countdown to the start begins early in the afternoon with the drivers' presentations, the official opening of the track and various ceremonies. The flag will drop at 4pm (local time, 2pm GMT) to signal the start of the 72nd running of the 24 Heures.