Le Mans, France, June 23, 2013 – The 81° edition of the classic 24 Hours of Le Mans, the world’s greatest endurance race, illustrated the supremacy of Brembo brakes with the overall victory of the #2 Joest Audi R18 e-tron quattro of Duval, Kristensen and McNish in the top LMP1 class; in the LMP2 class win for the #35 Oak Racing Morgan (Baguette, Gonzalez, Plowman); in the first-place GTE Pro class finish for the #92 Manthey Porsche (Lietz, Dumas, Lieb); and in the GTE AM class victory for the #76 IMSA Porsche (Vernay, Narac, Bouret).

Brembo has collaborated with Audi since the debut of the German car manufacturer at Le Mans in 1999. In fact, in 2001, the Brembo-equipped Audi ran the entire race, for the first time, without changing any discs or brake pads. 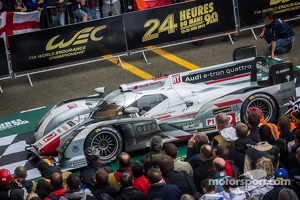 This year’s overall victory represents Brembo’s 22nd win in 25 years, dating back to Brembo’s first overall with Mercedes in 1989. Since then, Brembo has provided its record-winning brakes to manufacturers such as Audi (12x), Porsche (4x), Peugeot (3x), Mazda, and McLaren to say nothing about Brembo’s many class victories.

For the 2013 edition of the prestigious French competition, the Italian company, a world leader in the production of brake systems, supplied 73% of the teams (41 of 56 cars), including every Aston Martin, Ferrari, Porsche and Viper in the GTE class.

For Le Mans, Brembo’s focus is on lightweight, long-lasting brake technology, especially for the new hybrids where reduced weight is critical for success. The majority of prototypes use lightweight, monobloc aluminium calipers with carbon-carbon discs, 380mm in front and 355 or 337mm on the rear axle, while GT cars require heavier cast iron rotors.

Brembo is synonymous with success since 1975, when Enzo Ferrari relied on the Italian manufacturer of high-performance braking systems to equip his legendary Formula One cars. From then on Brembo has equipped the most important teams and manufacturers dominating in the most prestigious categories.

Racing teams and manufacturers such as Aston Martin, Audi, Chevrolet, Chrysler, Ferrari, Ford, Honda, Peugeot, Porsche, Maserati, Mercedes demand the best and turn to the expert in braking technology and performance: Brembo. The excellent trusted relationships that Brembo has with more than 30 original equipment manufacturers and hundreds of championship-winning race teams in F1, IndyCar, NASCAR and sports cars, are based on the fact that Brembo is the industry benchmark.