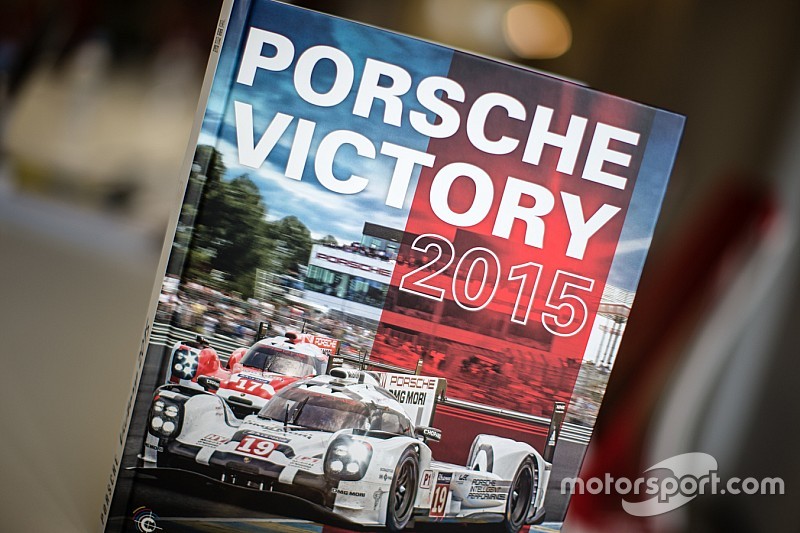 In his latest book about the 2015 Le Mans 24 Hours, author Rene de Boer goes behind the scenes of the Porsche works effort and tells the story of the brand’s record 17th win at the world-famous endurance race.

Across a total of 192 pages the reader re-lives an exciting journey through one of the most remarkable years in the history of Porsche, filled with emotion, hard work and dedication.

It is right at the beginning of “Porsche Victory 2015” that you get an idea about what this latest Le Mans win means to the German marque as it is legendary 1970 Porsche Le Mans winner Hans Hermann who gives an introduction to the book with his foreword.

He speaks about the “myth of Le Mans” and how he is being drawn back to this race each and every year ever since that very first Porsche victory at the Circuit de la Sarthe back in 1970 with the famous Porsche 917 driven by himself and Richard Attwood.

This myth is what made Porsche return to endurance racing’s premier class in 2014 and launch another attack on overall glory at the 2015 Le Mans 24 Hours.

But the story begins at square one, of course – with the official presentation of the three Porsche 919 Hybrid cars, their liveries and their drivers at FIA WEC’s 2015 pre-season testing at Paul Ricard in France.

From there it’s fast forward to the big day at Le Mans through preparation and testing. And finally, the Porsche squad faces the crowd at public scrutineering in downtown Le Mans where you can feel the tension, the excitement and the anticipation of everybody involved.

“Porsche Victory 2015” then goes on with the first laps at the 2015 Le Mans 24 Hours race weekend for the 919 Hybrid cars and their fellow Porsche competitors in the GT classes with actor-turned-racer Patrick Dempsey being one of the most prominent faces in the paddock.

The most famous 24 hours of them all

And then, finally, the three Porsche LMP1 cars are off into one of the most famous races in the world, facing tough opposition, tricky conditions and several obstacles that only 24-hour races can provide.

We get first-hand insights from drivers like Mark Webber and team managers such as Fritz Enzinger all through the race while we dive deep into the special Le Mans atmosphere where the Porsche cars battle through the night against the strong Audi outfit.

At the end Porsche prevails – with current F1 driver Nico Hulkenberg at the wheel of the No. 19 Porsche 919 Hybrid that takes the flag after 395 laps and brings home a much celebrated 17th overall victory at Le Mans for the Porsche brand. He celebrates the success with co-drivers Nick Tandy and Earl Bamber.

The book, partnered by Motorsport.com, comes along with tons of impressive pictures from one of the most atmospheric race tracks in the world, taken by Motorsport.com’s Eric Gilbert and James Holland among others.

You also find a lot of compelling facts and figures about racing at Le Mans, you learn more about the Porsche drivers and teams competing in the race and about the sophisticated technology that drove the German brand to victory in 2015.

All in all “Porsche Victory 2015” is a great read about Porsche’s latest success story at Le Mans.

Actually, it’s more than that: it’s a celebration of passion and determination – and the result of a truly great sporting achievement.