BMW Motorsport claims GTE pole position and third on the grid in Le Mans – Priaulx walks away from heavy accident.

Le Mans - BMW Motorsport secured excellent grid positions for the 24-hour race in Le Mans (FR). In the third qualifying session, Augusto Farfus (BR) set the fastest time in the LM GTE class, recording a 3:57.592 minutes lap in the no. 55 BMW M3 GT. This meant pole position for the 27-year-old and his fellow BMW drivers, Jörg Müller (DE) and Dirk Werner (DE). The second BMW M3 GT (number 56) will tackle the 79th running of the endurance classic from third on the grid. Andy Priaulx (GB) had posted this car’s best lap with a time of 3:58.426 minutes during Wednesday’s first qualifying session. 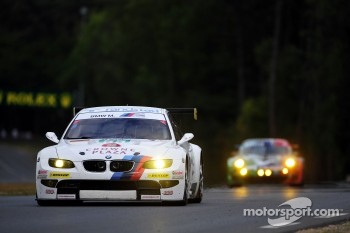 However, the triple world touring car champion and his team-mates, Dirk Müller (DE) and Joey Hand (US) were forced to sit out the third two-hour qualifying session on Thursday night. In the final stages of session two, Priaulx turned into a passenger in the Ford chicane, after another car had gone off and spread loads of gravel on the track. He lost control of his BMW M3 GT and hit the tyre barriers hard. While the front of the car was heavily damaged, Priaulx fortunately walked away from the accident without a scratch.

The crew now has plenty of time until the start of the race on Saturday, at 15:00hrs local time, to get the no. 56 BMW M3 GT ready for action again. Before the marathon gets underway on the 13.629-kilometre track, the drivers will be part of the show during the classic Drivers’ Parade in the centre of Le Manson Friday. Once again thousands of fans are expected to cheer the competitors of the Le Mans 24 Hours.

Mario Theissen (BMW Motorsport Director): “This has been a strong qualifying for our team. On Wednesday Andy Priaulx clocked a very quick lap, which put him on provisional pole. In the second qualifying session, unfortunately he had an accident, caused by gravel on the track. This accident means at least one nightshift for the mechanics of the Schnitzer team. Fortunately there isn’t another practice session on Friday, so we are sure to get the car repaired in time for warm-up on Saturday morning. In the third and final qualifying, we were involved in an exciting duel with the Ferrari, which was decided in favour of Augusto Farfus. Of course we are more than satisfied with first and third on the grid and look forward to a good race.”

Augusto Farfus (car number 55): “I didn’t get a run in the first session today, but knew the conditions at the start of the final session should be ideal for a quick lap. The car felt really good, and so I was able to put together a good lap and was delighted with the time I set. Pole is certainly not vital for a good result in a 24 hour race, but it is a great feeling to know your car is the quickest in its class. Add to this the reliability that it has shown all year and I feel pretty confident ahead of the race.”

Jörg Müller (car number 55): “We used today’s qualifying session to carry on with our race preparation programme. Augusto managing to set the pole position lap is just great. This track changes a lot almost from one lap to the next. So it’s a big challenge to react properly in terms of set-up. This has worked well for us so far. We can be happy with our performance, and I just feel very confident in the car.”

Dirk Werner (car number 55): “This pole position is fantastic, but it’s even more important we managed to take some steps forward again in preparation for the race. The car is just getting better and better. We know that grid positions are not that important in a 24hour race. But still a pole position should give all of us an extra boost.”

The car felt really good, and so I was able to put together a good lap...

Andy Priaulx (car number 56): “I am so sorry for the team as this is a big shame and gives them such a lot of work. I was looking forward to having a good go, and was just winding the car up for the start of the lap. I arrived and didn’t know there was anything wrong with the corner. There were no flags and just a sea of gravel on the track, which meant one or more cars had already gone off in front of me. Another shame is we have missed tonight’s qualifying session.”

Dirk Müller (car number 56): “Obviously we are disappointed about not being able to complete our race preparation as planned. However, it was just unfortunate for us, Andy couldn’t do anything to avoid this accident with so much gravel on the track. We must now concentrate on what lies ahead of us. I’m pretty confident that the Schnitzer crew will manage to get our car repaired.”

Joey Hand (car number 56): “This might be the first race weekend I’m contesting with BMW Team Schnitzer and the guys from BMW Motorsport, but one thing I know for sure if anybody can fix this car, then it will be this squad. Andy, Dirk and I will definitely be even more pumped up for the race.”