Bentleys on front row for 24 Hours of Le Mans

Bentley secured the front row for the Le Mans 24 Hours race after staying on top over all four two-hour qualifying sessions. The team went into the final session with the two fastest times, although Tom Kristensen underlined his dominance with a ...

Bentley secured the front row for the Le Mans 24 Hours race after staying on top over all four two-hour qualifying sessions. The team went into the final session with the two fastest times, although Tom Kristensen underlined his dominance with a fastest lap a couple of seconds faster than the sister Bentley. Third place was finally won by the Audi Sport UK R8 after a challenge from the Racing For Holland Dome S101-Judd that eventually qualified fourth. 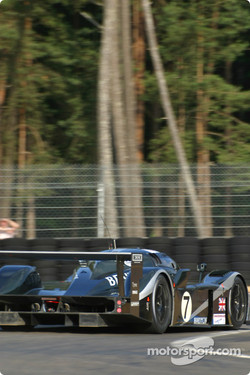 #7 Team Bentley Bentley Speed 8: Tom Kristensen, Rinaldo Capello, Guy Smith .
Photo by Eric Gilbert.
"I am very happy to be in pole position" said Kristensen after the session. "The car has showed the pace in qualifying."

In the LMP675 class the RN Motorsport DBA 4-Zytek car driven by John Neilsen, Hayanari Shimoda and Casper Elgaard will start from pole position. The car suffered from mechanical problems during this final session but was not put under any pressure from the Intersport Racing Lola that eventually qualified three seconds behind.

Veloqx Prodrive secured the front row of the LM GTS class with their pair of Ferrari 500 Maranello cars. The car of Peter Kox, Tomas Enge and Jamie Davies was one and a half seconds of the sister car of Kelvin Burt, Anthony Davidson and Darren Turner.

Sascha Maassen, Lucas Luhr and Emmanuel Collard will start in pole position in the LM GT class after narrowly setting the fastest time in their Alex Job Racing Porsche 911 GBT3-RS. They were closely followed by The Racer's Group Porsche of Kevin Buckler, Jorg Bergmeister and Timo Bernhard. 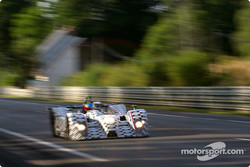 #16 Racing for Holland Dome S101 Judd: Felipe Ortiz, Beppe Gabbiani, Tristan Gommendy.
Photo by Eric Gilbert.
The session started frantically with a queue of cars eager to get to the track. The drivers flew round on their warm-up laps and straight away Kristensen was just tenths of a second away from his fastest time in the Bentley. Lammers jumped back ahead of the Audis with a stunning 3m 36.156s lap in the Racing For Holland Dome S101-Judd to move up to third place. The next time round Herbert in the sister Bentley improved to 3m 35.098s and stayed in third. Tristan Gommendy also improved to seventh place in the sister Dome S101-Judd.

Tomy Erdos had an unfortunate start to the session as his Graham Nash Motorsport Saleen S7-R coasted to a halt on his out lap and had to be recovered. Soon afterwards Tim Sugden spun off into the gravel and his Dewalt Racesports TVR Tuscan had to be pushed back onto the track by the marshals.

The Rachel Welter WR-Peugeot car driven by Gavin Pickering coasted to a halt at the pitlane exit. The driver had to ask the marshals to remove the bodywork so that he could work on the car and, after a lot of work and advice from the other side of the wall, Pickering was able to restart the car and coast back to the pit lane.

Marc Goosens was finally able to show the potential of the Riley & Scott Racing MkIIIC-Ford with a 3m 37.476s lap to move up to seventh place immediately behind the three Audi R8s twenty minutes into the session. Despite this pace the car also toured round the circuit very slowly on several occasions, taking several minutes to complete a sector that normally takes just over half a second.

Biela responded to Lammer's pressure by moving his Audi Sport UK R8 up to third place with a 3m 35.745s lap, just three-quarters of a second behind the second-placed Bentley that was being driven by Blundell at the time. 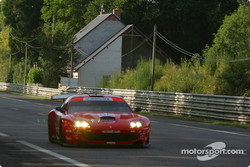 The leaders spent the next half an hour running at race pace, at around 3 minutes 40 seconds and making minor adjustments to their cars. Brabham, in the middle of one of these stints, did a noticeably quick lap that was just one second shy of his team's fastest time.

With quarter of an hour to go Tom Kristensen returned to the pit lane with damage to the front of his Bentley car. The car was parked in the garage as there was not enough time to make repairs. None of the leading cars improved on their times in the final minutes and so, when the chequered flag was waved, Bentley took pole position for the race.

The Lister Racing Lister Storm LMP, car number 20, was withdrawn from the event because it was too seriously damaged after Jamie Campbell-Walter's crash in the first part of the second session. The driver was taken to hospital for checks but did not suffer any significant injuries.

The driver's parade will take place on Friday 13th June at 6pm in the Le Mans town centre. The warm-up session will take place on Saturday 14th at 9am and the race will being at 4pm the same day. All times are local (+2 hours GMT).