LE MANS, France (May 4, 2003) - Bentleys and Audis led the way overall Sunday as racing teams had eight hours of testing at the Circuit de La Sarthe to help them prepare for next month's running of the 24 Hours of Le Mans. Regular American Le Mans ...

LE MANS, France (May 4, 2003) - Bentleys and Audis led the way overall Sunday as racing teams had eight hours of testing at the Circuit de La Sarthe to help them prepare for next month's running of the 24 Hours of Le Mans. Regular American Le Mans Series teams were well-represented, setting the fastest times in two classes and running close to the front in others. 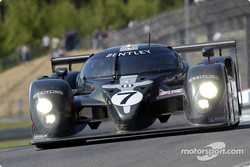 #7 Team Bentley Bentley Speed 8: Tom Kristensen, Rinaldo Capello, Guy Smith .
Photo by Team Bentley.
The fastest overall time of the day was set by defending American Le Mans Series champion Tom Kristensen, driving a Bentley Speed 8 Prototype to a lap of 3:34.820 around the 8.625-mile French racing circuit. Kristensen has been on the winning team four times at Le Mans, including the past three years in a row when he drove for the factory Audi team. The Dane will share one of the two Bentleys with Rinaldo Capello and Guy Smith.

The Veloqx Prodrive Ferrari 550 Maranello, which regularly competes in American Le Mans Series events, set the fastest time of the day in the GTS class for production-based cars with Tomas Enge of the Czech Republic at the wheel. Enge, whose co-drivers are Peter Kox and Jamie Davies, turned a lap of 3:57.180.

The Racers Group Porsche 911 GT3 RS, winner of the GT class last year in th 24 Hours of Le Mans, was the fastest of the day in the GT class with a lap of 4:08.636. Kevin Buckler of Sonoma, Calif., will share the car with Timo Bernhard and Jorg Bergmeister of Germany, all regular competitors in ALMS events.

The 50 cars that have been invited to compete in the June 14-15 event, plus six reserve cars, were required to take part in the testing session. Among the 50 invited teams are 21 that regularly race in the American Le Mans Series, and 32 that competed in the Mobil 1 Twelve Hours of Sebring that opened the 2003 ALMS season in March. Three of the reserve cars are ALMS regulars.

The Bentley led the GTP class, while the LMP 900 class for open-cockpit Prototypes was led by the Team Goh Audi R8, which Jan Magnussen of Denmark drove to the second-fastest lap of the day overall at 3:38.385. Magnussen will share the car with Marco Werner and Seiji Ara. Magnussen's time was the fastest of the day overall until Kristensen beat the time in the closing minutes of the day with a flying lap. 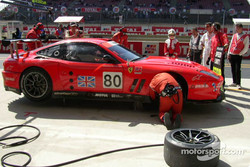 Second-fastest in the GT class was the Porsche 911 GT3 RS of Alex Job Racing, driven by Lucas Luhr, Sascha Maassen and Emmanuel Collard to a lap of 4:11.316. The Job team is fielding the car at Le Mans in a cooperative effort with White Lightning-Petersen Motorsports as the two ALMS regular teams combined forces for a first Le Mans appearance. Orbit Racing, another regular ALMS team, was third in the GT class with a lap of 4:13.141, its Porsche driven by Marc Lieb, Leo Hindery and Peter Baron.

The LMP 675 class for smaller Prototypes was led by RN Motorsports in a DBA Zytek at 3:47.708. The car driven by John Nielsen, Hayanari Shimoda and Johnny Dumfries was more than 10 seconds ahead of the second-place car in the class, the Reynard 2KQ LM of Jean-Luc Maury-Larbiere, Pascal Fabre and Christophe Pillon at 3:57.760. Intersport Racing, with defending ALMS LMP 675 champion Jon Field of Dublin, Ohio, at the wheel, overcame some early-session difficulties to set the third-fastest speed with limited track time. The Lola-MG, which Field will share with Duncan Dayton and Rick Sutherland, ran a lap of 3:58.044.