Bentley remained fastest after an incident-packed first part of the second qualifying session for Le Mans 24 Hours despite coming under increasing pressure from Audi. The car of Tom Kristensen, Rinaldo Capello and Guy Smith remained comfortably ...

Bentley remained fastest after an incident-packed first part of the second qualifying session for Le Mans 24 Hours despite coming under increasing pressure from Audi. The car of Tom Kristensen, Rinaldo Capello and Guy Smith remained comfortably ahead thanks to Kristensen's fastest lap from yesterday, but both the Team Goh and Champion Racing Audi R8s improved to move within two seconds of the second placed Bentley. 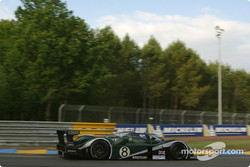 #8 Team Bentley Bentley Speed 8: Johnny Herbert, David Brabham, Mark Blundell.
Photo by Eric Gilbert.
Bentley already held the front row after the first session with the number 7 Bentley on provisional pole position with a 3m 32.843s lap and the sister car of David Brabham, Mark Blundell and Johnny Herbert behind at 3m 35.222s. Herbert looked fast on many of his laps and ultimately he improved on his team's time at the end of the session with a time of 3m 35.126s. The other Bentley lapped mostly in the 3m 37s range and did not try to improve on its time.

Behind the Bentleys the Audi R8s were started the session third, fourth and sixth with the Audi Sport UK car of Frank Biela, Mika Salo and Perry McCarthy ahead of the Champion Racing car of JJ Lehto, Emanuele Pirro and Stefan Johansson and the Team Goh car of Jan Magnussen, Seiji Ara and Marco Werner. Magnussen put in a strong lap near the end of the session to propel the Team Goh car ahead of Jan Lammers's Racing For Holland Dome Judd and the two other Audi R8s. Lehto also improved on his team's time to move the Champion Racing car ahead of the Audi Sport UK R8.

There had been concerns that there may be poor weather conditions for the session as some teams did longer runs than they were originally planning in the first session in anticipation of rain at some point during the evening. There was a heavy shower during the morning and dark cloud in the afternoon but by 6pm the conditions had brightened and were as good as those during yesterday's qualifying session.

Smith led out the field from the pit lane in his Bentley as the drivers familiarized themselves with the track that had just been used for the supporting Le Mans Legends historic race. Most drivers returned to the pits but Biela stayed out in the Audi Sport UK R8 as did Jan Lammers in the Racing For Holland Dome Judd. Their laps, almost identical in time by the start of the third sector, were brought to a halt by a red flag.

Jamie Campbell-Walter had a serious accident in the seventh minute of the session. The Lister Racing Lister Storm LMP ran off the track at Courbe Dunlop and stopped backwards against the barrier on the inside of the circuit. There was only light damage to the left-hand side but the driver, who was conscious and not seriously injured, was unable to get out of the car. The marshals and safety teams quickly arrived at the scene and spent ten minutes extracting Campbell-Walter before taking him away in a waiting ambulance. 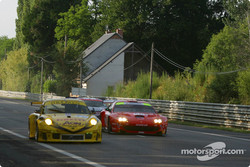 #78 PK Sport LTD Porsche 911 GT3 RS: Robin Liddell, David Warnock, Piers Masarati, #88 Veloqx Prodrive Racing Ferrari 550 Maranello: Tomas Enge, Peter Kox, Jamie Davies.
Photo by Eric Gilbert.
Cars frantically returned to the circuit to make the most of the remaining daylight in the session. JJ Lehto was the first of the front runners to set a flying lap and he did a 3m 39.344s lap in the Champion Racing Audi R8, just two seconds slower than his team's fastest time from the first session. Again there was a red flag soon into the session after a series of incidents.

The session restarted at 7.50pm to finally allow the cars to do some serious running. The Panoz cars remained in the garages as the rest of the leading cars came out. Smith completed Bentley's first flying lap with a 3m 37.458s lap that was just over four seconds slower than the provisional pole position time. Lehto did a strong lap in the Champion Racing Audi that was just one second slower than its fastest time, while Biela lapped a little slower in the Audi Sport Racing R8.

After a long quiet period most of the LMP900/GT cars returned to the circuit to do some set-up work and race configuration running, with the leaders lapping in around 3 minutes 45 seconds. Lehto was the first LMP900/GT driver to improve on a time set yesterday when the Champion Racing R8 put in an extremely fast lap to improve to 3m 36.857s. Jean-Marc Gounon took over in the Courage Competition Courage-Judd C60 and was consistently lapping fast, even within tenths of the team's quickest time from yesterday

As the session drew to a close Magnussen moved the Team Goh Audi R8 up to third place with a strong lap timed at 3m 36.418s. Johnny Herbert crossed the line soon afterwards to improve the number 8 Bentley's fastest time by one tenth of a second. Gounon also improved his time by just over a second in the Courage Competition Courage-Judd C60 to move up to tenth place from a provisional eleventh place. 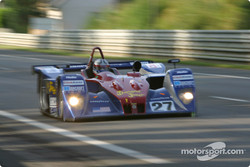 In the LM GTS class the Veloqx Prodive Ferrari 550 Maranello of Jamie Davies, Peter Kox and Tomas Enge remained in provisional pole ahead of the Corvette Racing Chevrolet Corvette C5-R of Kelly Collins, Oliver Gavin and Andy Pilgrim. In the GT class the Alex Job Racing Porsche 911 GT3-RS driven by Sascha Maasen, Lucas Luhr and Emmanuel Collard led with its time from yesterday.

There were several spins, mechanical problems and incidents during the session.

Butch Leitzinger spun off lost control of in his Risi Competizione Ferrari 360 Modena in the second sector midway though the session but was able to rejoin the circuit. He had damaged the rear of the car, however, and returned to the pits to repair the damage.

Rick Sutherland's Intersport Racing Lola-MG spun off at the first chicane and became stuck in the gravel near the end of the session. As the car was removed and restarted the Carsport America Pagani Zonda car driven by Anthony Kumpen coasted to a halt before the chicane. Also the JML Team Panoz car driven by Scott Maxwell stopped at Virage d'Indianapolis with a puncture.

The Pilbeam--JPX MP91 of Jeff Bucknum, Bryan Willman and Chris McMurry did not do any running in the session as an engine change was being carried out.

The second part of the second qualifying session, which will be the final opportunity for teams to improve on their times, will take place at 10pm local time (+2 hours GMT).

Bentleys on front row for 24 Hours of Le Mans

Barrichello and Lammers team up for 2017 LMP2 entry