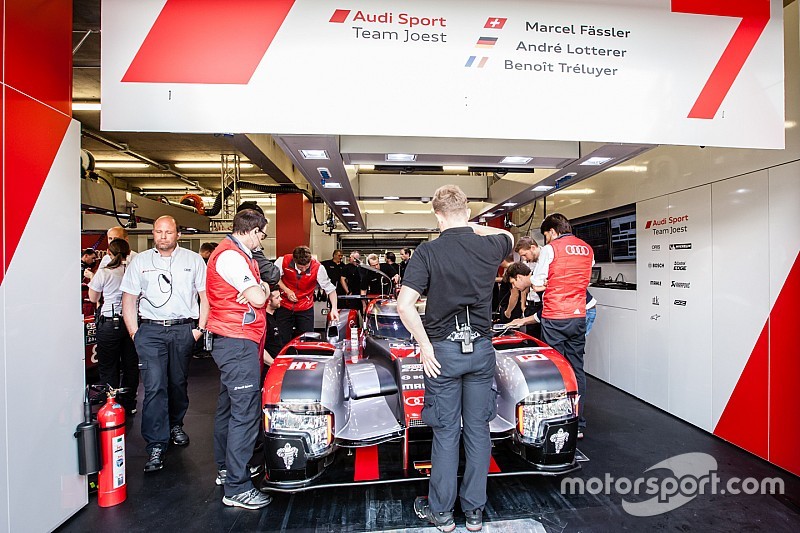 The #7 Audi R18 driver shares his seven biggest thrills about the twice-around-the-clock classic.

Benoît Tréluyer, who eyes a fourth outright victory at the 24 Hours of Le Mans with his Audi Sport buddies André Lotterer and Marcel Fässler, likes number symbolism. Born on December 7 and now part of the #7 Audi R18 crew, the Frenchman shares his seven biggest thrills about the twice-around-the-clock classic. And brings you to seventh heaven!

It’s an icon! At Le Mans, you step into another dimension. Circuit de la Sarthe is all about excessiveness – the length, the speeds you reach. Each corner is unique and has its own character, its own story. The Dunlop Curve, the Tertre Rouge, Arnage, Indianapolis, the Ford chicanes, etc. These are not only turns, these are fragments of Le Mans legend! And of course there is the world-famous Mulsanne Straight, which remains the circuit’s hallmark and gave it its fame.

It’s like no other but perhaps we should talk about it as a village. In the Le Mans paddock, you sleep, eat, work… you can even do some shopping. Once you cross the circuit’s grounds, it feels like entering a parallel universe, a small town with its own streets, restaurants, hotels, and even police force. Every year, I take up residence in my bungalow the weekend before the race and settle there with my wife Mélanie and son Jules so we can share every night as a family. Le Mans is also a way of life!

It’s always a very special moment at Le Mans. I’ve lived it from inside and outside the car and I must admit I am a big fan of experiencing it from the garage, together with the team. You follow the formation lap, the famous music that goes crescendo once the cars are in the Ford chicanes. Each time, it gives me goose bumps. I love living this moment as a spectator: it is a very powerful feeling indeed. When all the cars have whizzed past, you don’t hear anything for the next three minutes, which seems like an eternity. Then, they are back to complete the first lap and you know that’s when the 24 Hours of Le Mans is well and truly under way.

The sort of curves you don’t find anywhere else in the world. In terms of what you feel at the wheel, it is unrivalled. A good car at Le Mans is a fine balance between low downforce to go fast on the straights and high downforce to be quick through the corners. That’s a fine line to tread. We’re really on the knife-edge in terms of speed and the Porsche Curves are the ultimate test! Each time we enter this sequence of corners, it’s just a blast. This is a part of the circuit I love and that reminds me why I do this job on every single lap. The first time I tackled the curves in an LMP1 car was with a Pescarolo. I thought I’d done a pretty good job and then looked in the rearview mirror and saw that a GT car was close by. I had totally underestimated what the car could do. In the Porsche Curves, the faster you go, the more grip you get, it’s just fantastic. However, you have to be careful not to get too greedy because any mistake will cost you dearly. The walls are pretty close, especially on the outside of the second Esse.

There is a special relationship with the fans at Le Mans, almost a connection. It’s specific to the event. What is paradoxical is that there is a huge crowd and yet you feel close to them at the same time. Across the Test Day, the practice sessions, the Drivers’ Parade and the race, there are people you are going to bump into several times and some faces that will start to become familiar. Once again, that only happens at Le Mans, as spending an entire week on site allows you to build a rapport that is not forced, token, or bogus. Here, you live extraordinary things, in the true sense of the word. For me, it always feels that bit more special because Le Mans is not far from Alençon, where I was born and raised.

The family and close friends

Every year I see my family, relatives and friends so Le Mans has become a place and time for gatherings! These are both very intimate and emotional moments and I really look forward to them. Plus, springtime is the nicest time of the year in the region and we always find time to get together around a barbecue. All these little pleasures also contribute to making Le Mans such a great event.

It’s gotta be my seventh wonder! The Le Mans podium tastes all the better considering how difficult it is to reach it. I’ve been lucky enough to make it on several occasions, six out of 11 entries I think. I was not always P1 of course. Winning Le Mans is the cherry on the cake. When you get called last on the podium, it’s just a magical feeling. You come out and see this human tide that does not seem to end. It is both thrilling and dizzying. Each time, I try to see where the wave stops but I can’t find it. I really hope to see this outpour of happiness again from the top step of this prodigious podium. Up there is really seventh heaven!

Corvette Racing at Le Mans: Time to take on the world once again