The 16th and 17th hours at Le Mans brought plenty of surprise and drama - the action started when the lead Audi pitted for some work on the rear suspension and then soon afterwards Martin Short had a big accident in his Dallara Judd. Emanuele Pirro ...

The 16th and 17th hours at Le Mans brought plenty of surprise and drama - the action started when the lead Audi pitted for some work on the rear suspension and then soon afterwards Martin Short had a big accident in his Dallara Judd. Emanuele Pirro then went off into the gravel in the Champion Racing Audi but rejoined soon after. 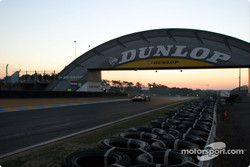 A quiet morning in Le Mans.
Photo by Tom Haapanen.
Short, in fifth place in the Rollcentre Racing Dallara Judd, suffered a left-rear suspension failure at the Karting Esses. The car spun round and hit the tyre barriers sideways at high speed in a huge impact. He came to a rest with a badly damaged rear but the driver was able to walk away.

Jamie Davies pitted in the leading Audi Sports UK Team Veloqx as it was understeering and loosing time. After an extended pit stop, during which time the Audi Sport Japan Team Goh of Rinaldo Capello took the lead, Davies took to the track and lapped at a blistering pace, up to six seconds faster than before.

Eric Comas put in a very strong stint in the Pescarolo Sport Judd in third place and lowered the team's fastest lap several times before pitting for fuel. He pitted later and the team took the bodywork from the back of the car and worked on the engine. The problem was soon fixed and he was able to continue in third place.

Peter Kox was still leading the LM GTS class in the Prodrive Racing Ferrari 550 Maranello ahead of the Corvette Racing C5-R of Oliver Gavin. Stephane Ortelli led GT class in his Freisinger Motorsport Porsche 911 GT3 RSR narowly from the Petersen/White Lightening car of Patrick Long who had a quick trip through the gravel. 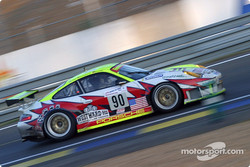 #90 White Lightning Racing Porsche 911 GT3 RSR: Sascha Maassen, Jorg Bergmeister, Patrick Long.
Photo by Tom Haapanen.
Emanuele Pirro in the Champion Racing Audi went straight on at Virage de Mulsanne, the sharp right-hander at the end of the Mulsanne Straight and flying into the gravel. The car was pushed to one side by the marshals and he was able to rejoin. Pirro then spotted for a tyre change and handed over to JJ Lehto.

On lap 256 the leading Audi Sport Japan Team Goh car had a massive lock up under braking for a tight chicane. Capello returned to the pits immediately and changed all the tyres and Tom Kristensen took over behind the wheel. Davies pitted on lap 259 and handed over to Johnny Herbert with fresh tyres and a full tank of fuel.