Audi took home the win in the 2013 edition of the 24 Hour of Le Mans, with the trio of Tom Kristensen, Allan McNish, Loic Duval beating the number 8 Toyota by a margin of a single lap. The win is the

Many expected that invisible force that Audi seems to bring to Le Mans to take over and leave the Toyota team in the dust, but they were able to overcome the many challenges of a 24 hour event to capture the second spot on the podium with the lineup of Anthony Davidson, Stéphane Sarrazin, Sébastien Buemi.

In the LMP2 ranks, the Oak Racing group of Bertrand Baguette, Ricardo Gonzalez, Martin Plowman beat their team mates in the #24 Oak Racing machine to the line by a single lap. 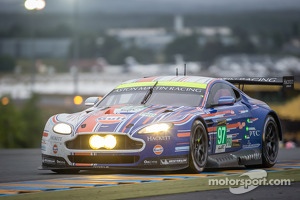 Fans came together to cheer on the Aston Martin marque who lost driver Allan Simonsen early in the event, but raced on at the wishes of his family with the other 4 cars the team entered. The best finishing Aston Martin came home in the third and final spot on the podium. Darren Turner, Stefan Mücke, Peter Dumbreck brought the number 97 Aston Martin home only a single lap behind the winning Porsches.

Lastly, the GTE Am category saw the #76 IMSA Performance Matmut Porshe take home the win, with the lineup of Raymond Narac, Jean-Karl Vernay, Christophe Bourret by a margin of a single lap.

This years event will always be remembered for the fatal accident on the fourth lap, but on the good side of the spectrum, drivers had some of the most difficult driving conditions in recent memory. Sprinkling rain eary, a wet but drying track at night, back to a slippery surface for the daytime final push to the checkered flag.

Lotus Praga LMP2 retire from the 24 Hours of Le Mans