Audi ready for the 24 Hours of Le Mans 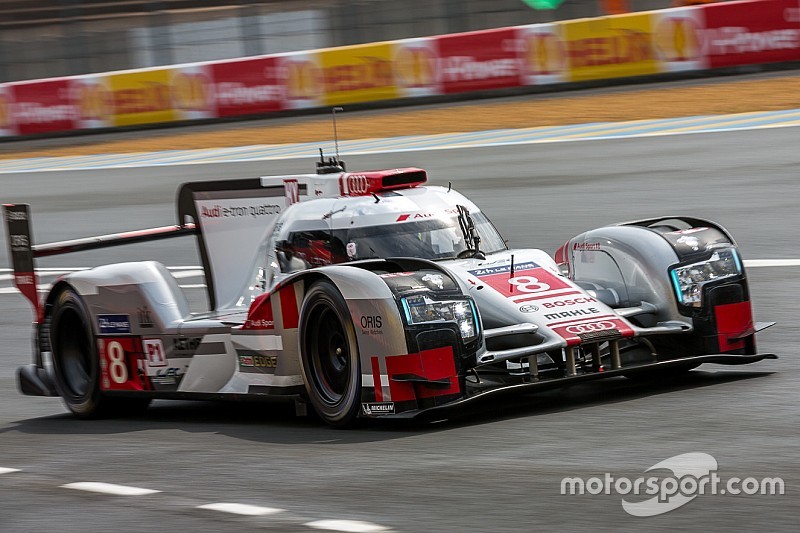 All three Audi R18 e-tron quattro cars on 2nd and 3rd rows of the grid.

After an arduous day’s work on Thursday, Audi Sport Team Joest is now ready for the greatest challenge of the 2015 motorsport season – the 24 Hours of Le Mans (start Saturday at 1500 CEST).

After first qualifying on Wednesday, the Audi Sport Team Joest mechanics worked in shifts from midnight onwards to completely rebuild the three Audi R18 e-tron quattro cars for the race. All three hybrid sportscars were ready to go in good time for second qualifying at 19:00.

“This procedure has been standard for us now for many years and well-practiced,” said Chris Reinke, Head of LMP at Audi Sport. “Even so, it’s always an exceptional achievement by the entire team and a superb logistical feat, for which I can only thank everyone involved: that was Audi Top Service

Besides speed, it’s efficiency and reliability that count here at Le Mans more than anything else – and those are exactly the strengths of Audi.!”

Audi Sport Team Joest used the two qualifying sessions on Thursday evening to further optimize the race set-up of the three Audi R18 e-tron quattro cars, and to test tire specifications for the race. To this end, the conditions were considerably better than the previous day, even though valuable track time was lost again due to interruptions.

“We concentrated solely on working for the race again today,” said Head of Audi Motorsport Dr. Wolfgang Ullrich. “I am convinced that we are well prepared and have three very good race cars, in which our drivers feel comfortable. This is important for Le Mans. Using the tires to their optimum will be an extremely crucial factor in the race. I think we are in a good position as far as this is concerned.”

For the 83rd running of the famous endurance classic, Audi Sport Team Joest relies on the efficiency technology Audi ultra, which has its roots at Le Mans and is found today in all production cars from AUDI AG. The latest Audi R18 e-tron quattro is one of the world’s most efficient racecars owing to its new aerodynamics and the combination of TDI power on the rear axle and an electrically driven front axle. On the Hunaudières straight at Le Mans, it reaches a top speed of around 340 km/h.

Loïc Duval set the fastest lap within the Audi squad on Wednesday evening with an average speed of 245.5 km/h. André Lotterer moved up the grid from sixth to fifth on Thursday. Filipe Albuquerque recorded the fastest time in the third R18.

Dr. Wolfgang Ullrich (Head of Audi Motorsport): “I’m pleased with the work done by the entire squad. We went through everything that was possible in the time that was available to us. However, there were many interruptions during the three qualifying sessions. That interfered a little with our programs. Still, Audi has prepared well for the Le Mans 24 Hours. There are many strong rivals and teams in contention for victory. The crowd can look forward to seeing a classic in the 83rd running of the race.”

Chris Reinke (Head of LMP at Audi Sport): “I’d say our preparation for the race has been optimal. We used the driving time to gather as much data as possible. At the same time, our drivers did a perfect job and returned to the pits without the slightest body contact. The way the cars themselves ran technically was absolutely perfect as well. As always, we didn’t participate in the time chase because consistency is simply more important at Le Mans than a single fast lap is. Looking at the relative strengths, I’m sure that the first two thrilling WEC rounds at Silverstone and Spa provided a good taste of what the fans can expect here for 24 hours, starting on Saturday afternoon.”

Ralf Jüttner (Team Director Audi Sport Team Joest): “We did a lot of driving, our race drivers were able to adjust well to the cars and technically everything went smoothly. Obviously, this paid off because all our drivers achieved good lap times. Congratulations to Porsche on clinching the best grid positions. But for the race I’m optimistic as far as our pace is concerned because other factors come into play across the distance. I’m proud of the performances of our squad. The race cars become more technically complex every year. From Wednesday to Thursday we prepared all three Audi R18 e-tron quattro cars from scratch again for the race as planned. That’s an outstanding achievement in such a short time.”

Marcel Fässler (Audi R18 e-tron quattro #7): “We used the time in qualifying to set up our Audi R18 e-tron quattro for dry track conditions. We also paid attention to giving each driver the same amount of driving time as far as possible. André (Lotterer), Ben (Tréluyer) and I agree that our car is good to drive. So, we were never out to set a single fast lap time in any of the sessions. Plus, we could have hardly beaten the competition either. Instead, our race car is outstanding across the distance. This strategy will be crucial in this race. And the weather will play a role as well. We’re in for a very thrilling race. I’ve got a good feeling.”

André Lotterer (Audi R18 e-tron quattro #7): “On the test day two weeks ago, we didn’t find a rhythm because the weather put a spoke in our wheels. That’s why I’m happy that the qualifying sessions during the race week developed well for us, even though there were some interruptions. We continually improved our car. The R18 e-tron quattro feels good and gives us the self-confidence you need for 24 hours.

Benoît Tréluyer (Audi R18 e-tron quattro #7): “It’s been an exciting week up to now at Le Mans: scrutineering on Sunday, the traditional unveiling of the fingerprints on Monday, a lot of media commitments and then, obviously, the concentrated work with the squad on setting up our car. This build-up of suspense is exactly what makes Le Mans so unique. We feel comfortable in our car – that’s the best news you can have before a 24-hour race. We’re getting more and more excited about the start coming up.”

Lucas di Grassi (Audi R18 e-tron quattro #8): “We’ve come a long way in preparing now. During the pre-tests, in free practice on Wednesday and in the qualifying sessions, we had to work through our program in all kinds of conditions – we’re done with that now. We covered a total of 124 laps, which is nearly 1,700 kilometers. Grid position four is a good result on the one hand but on the other it doesn’t mean a lot. Besides speed, it’s efficiency and reliability that count here at Le Mans more than anything else – and those are exactly the strengths of Audi.”

Loïc Duval (Audi R18 e-tron quattro #8): “It does feel a bit strange to celebrate your own birthday in the pits at midnight. Although the pole position wasn’t one of the gifts, there was something that was even a lot more important: our three cars didn’t get a single scratch in the qualifying sessions and all the drivers feel comfortable in the cockpit. Obviously, we’ll continue to prepare up to the start of the race but the base for the race is excellent already. Of course we lost a lot of time due to the interruptions – but that’s the same for everyone in the field.”

Oliver Jarvis (Audi R18 e-tron quattro #8): “It’s been a very good week for us. The conditions weren’t always easy, but we kept our cool and stayed focused on reeling off our program. Qualifying is over now, so now we’re seriously in business at Le Mans – you can literally feel this tension in the pit lane. The spectators already got to see a thrilling qualifying in which Porsche were strong, as expected. Now, we’re going to leave no stone unturned to deliver an even more thrilling race to our fans.”

Filipe Albuquerque (Audi R18 e-tron quattro #9): “We optimally prepared for the toughest race of the year. The goal of our work was to make us feel comfortable in the cockpit on Saturday and Sunday. So, we worked out a set-up that all three drivers are equally happy with. Our starting base is not so crucial. It’s a lot more important to be competitive in the race. I already got along well with Marco (Bonanomi) last year. And our newcomer René (Rast) superbly fits with our squad. Audi has prepared us well for this race for more than half a year.”

Marco Bonanomi (Audi R18 e-tron quattro #9): “We had a lot on our plate for practice and qualifying, and finished our tasks. The whole team did a good job. And it helped that the rain that was forecast didn’t come. I’m expecting us to be in contention in the top group in the race. But it’s going to be a challenging weekend, because Porsche is a strong rival and we’re by no means underestimating our other competitors either. I believe we’ve got the chance of clinching a good result again this year at Le Mans.”

René Rast (Audi R18 e-tron quattro #9): “It’s always been a big dream of mine to race at Le Mans in the LMP1 class. Now, this dream has come true. I had goose bumps now and then sitting in the car and doing my first laps in the last couple of days. But at the next moment, I’m totally professional again and fully concentrated on my work in the cockpit. We knew it would be hard for us to beat Porsche in qualifying, so we focused on sorting all the things for the race.”

The starting grid at Le Mans