The rules may have been changed, and the teams may be different in 2004, but the Audi R8 appears to be as formidable competitor as ever. ...

The rules may have been changed, and the teams may be different in 2004, but the Audi R8 appears to be as formidable competitor as ever. 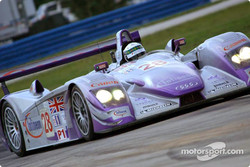 #28 Audi Sport UK Team Veloqx Audi R8: Pierre Kaffer, Frank Biela, Allan McNish.
Photo by Richard Sloop.
With Bentley having withdrawn after their 2003 triumph, the four Audis entered in this year's 24-hour classic showed their speed in the eight hours of preliminary testing at Le Mans, topping the timesheets in both sessions.

Allan McNish, who is teamed up with Pierra Kaffer and three-time Le Mans winner Frank Biela, set the fastest time in the afternoon, lapping the 13.65 km track in 3:32.615. The trio will be driving one of the Audi Sport UK Audi R8s, operated by Team Veloqx.

"After a four year absence, it's good to be back at Le Mans!," the Scot exclaimed. "We worked through a tyre programme before lunch, collecting valuable data for the race. Prospects look encouraging but the competition, not just from the other Audi teams, will be tough."

McNish feels that the rules change from the LMP900 regulations to the new LMP1 set, has not hurt the R8's performance. "Even with the smaller rear wing, the R8 still has a perfect balance at Le Mans," McNish explained. "Audi Sport's technicians once more have done a great job."

"The work in the wind-tunnel has paid off and Michelin has provided us with great tyres," explained a satisfied Dr Wolfgang Ullrich, the head of Audi motorsport. "All four R8 cars were on a similar level for a long period during the pre-test and have strong driver line-ups."

Johnny Herbert, piloting the second Audi Sport UK car, claimed second spot, just 0.012 seconds behind, having clocked a fastest lap at 3:32.603. Jamie Davies and Guy Smith will be the other drivers in this all-British driving crew.

"The car felt fairly good at the end of the morning when I did most of the driving, although there was still too much understeer," the former F1 driver explained. "I drove for the final 45 minutes in the afternoon and managed to achieve the second quickest time with five minutes to go."

Jorg Bergmeister set the benchmark in the GT class in the #90 White Lightning Porsche 911 GT3-RSR, eclipsing fellow RSR competitors in the #87 (Orbit Racing) and #85 (Freisinger Motorsport) Porsches, the Orbit team having recovered from a heavy spin in the morning session.

"The team did a really great job," Bergmeister recounted at the end of the testing sessions. "At the beginning of the day we had some handling problems, but we really improved upon that and that is the way that it should be. At the end we put on some qualifiers and I had a clear lap and the car felt really, really good."

The day included a requisite number of spins beyond Lieb's, with the Morgan Aero8, Barron Conner Ferrari and Choroq Porsche 911 all spinning hard enough to need a tow back to the pits.