Audi has done it again.

Audi has gone 1-2 in the 2014 edition of the 24 Hours of Le Mans! Fassler, Lotterer, and Treluyer earned the honor of winning this great race in the No. 2 Audi. Their sister car, the No. 1, brought home second, while the No. 8 Toyota fought back after an early crash to finish third. 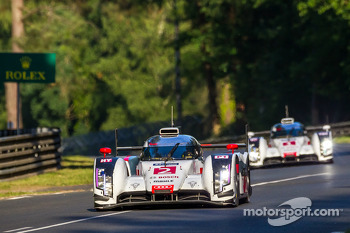 This is the third overall victory at Le Mans for all three of those drivers. As a team, they also did it back in 2011 and 2012. For Audi, it's their 13th Le Mans triumph in the last 15 years; five in-a-row too! This one certainly wasn't easy for the Audi team however. Their No. 3 car was destroyed in an early crash while the other two spent extensive stays int the garage area before fighting their way back up the order.

The No. 12 Rebellion brought home a very impressive fourth place finish with the LMP2 class winner finishing fifth overall. That would be the No. 38 JOTA Sport Zytek-Nissan team of Dolan, Tincknell, and Turvey. They finished ahead of the No. 46 Thiriet by TDS Racing Ligier-Nissan in second and the No. 36 Signatech Alpine-Nissan in third.

The No. 51 AF Corse Ferrari took a commanding victory in the GTE Pro Class with Bruni, Vilander, and Fisichella. They crossed the line one lap clear of the No. 73 Corvette, which made a late charge. The No. 92 Manthey Team Porsche rounds out the podium in that class.

The No. 95 Aston Martin, which is the team the late-Allan Simonsen drove for last year, took the glory in the GTE Am class with a roster of his fellow countrymen in Poulsen, Heinemeier-Hansson, and Thiim as their pilots. They won from the No. 88 Proton Porsche and the No. 61 AF Corse Ferrari.

The No. 7 Toyota, which utterly dominated the first half of the event, met an untimely end as the Sun began to rise over Le Mans.

After the loss of the Toyota, it was the No. 1 Audi that took control, but they would encounter some mechanical gremlins of their own with three hours remaining, setting up a Porsche Audi fight for the win.

No. 1 Audi in trouble as the No. 20 Porsche takes over

The Porsche began to really fall off the pace at the end of the race, and eventually retired. To find out what went down in the final portion of this thrilling race, click HERE

Summary From Hour Twelve To Eighteen