The German team takes the lead on the route to Le Mans, which began this weekend in front of 35,000 spectators in the Silverstone 6 Hours, the opening round of the WEC. The European Le Mans Series had a 3-hour race.

This weekend, the second FIA World Endurance Championship kicked off on the Silverstone circuit. After months of preparation the teams entered in the 2013 championship joined battle for the first time.

Despite Toyota locking out the front row during qualifying on Saturday 13th April, Audi won the race with its two R18 e-tron quattros with McNish-Kristensen-Duval leading home the reigning world champions Tréluyer-Fässler-Lotterer.

Not until the closing laps was the outcome of the race decided between the two cars as Tréluyer, whose R18 e-tron quattro lost transmission on the front wheels, was unable to fight off McNish’s final charge. 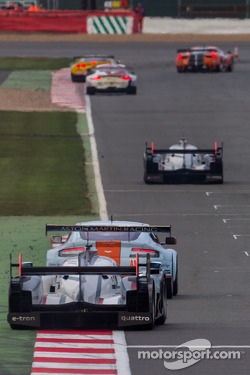 The Scot was particularly proud to win the famed Tourist Trophy with his two team-mates, one of the most prestigious British motor racing prizes, which was awarded specially for the occasion in the British round of the WEC.

Toyota was powerless to take the fight to the Audis in 2013 configuration with the 2012 version of its TS030, all the more so as the Japanese cars suffered excessive tyre degradation.

The Prost-Jani-Heidfeld Lola-Toyota entered by Rebellion Racing was the first of the privateer LM P1s to see the flag (5th).

In LM P2, the Delta-ADR Oreca 03-Nissan scored a dominant win in the hands of Graves-Pizzonia-Walker from the OAK Racing Morgan driven by Pla-Heinemeir Hansson-Brundle and the Greaves Motorsport Zytek Z11SN-Nissan of Dyson-Kimber-Smith-Marsal.

Aston Martin, which is celebrating its centenary this year, scored its first WEC wins in 2013 by dominating both the LM GTE Pro and GTE Am categories.

In the Pro category, Mücke-Turner-B. Senna fought off tough competition from the Vilander-Kobyashi Ferrari F458 Italia, and in GTE AM Nygaard-Poulsen-Simonsen took the flag in first place with the Larbre Competition Corvette of Bornhauser-Canal-Rees second. 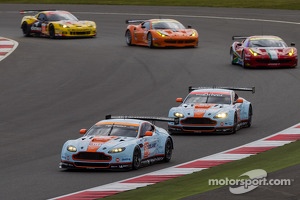 GT action at the start of the 6 Hours of Silverstone

Before tackling the summit of the World Endurance Championship, the Le Mans 24 Hours on 22-23 June in which a double helping of points will be awarded, the teams in the WEC will again do battle on the beautiful Spa-Francorchamps circuit in Belgium on 4th May.

On Saturday as a curtain-raiser to the Silverstone 6 Hours, the first round of the European Le Mans Series took place, some of whose entrants will be racing in the Sarthe classic. In dreadful weather conditions, overall victory in LM P2 went to Dolan-Turvey in their Zytek Z11SN-Nissan, while in GTE, Ried-Roda-Tandy triumphed in their Porsche 911 GT3 RSR entered by Proton Competition.

Next round of the European Le Mans Championship: the Imola 3 Hours (Italy) on 18th May.

Timo Bernhard and Romain Dumas in the Porsche LMP1