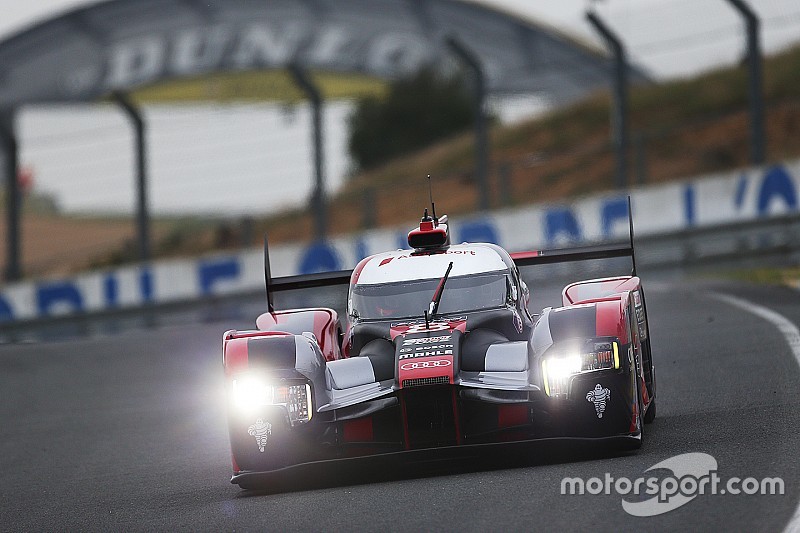 Audi took over the top position in the afternoon session of the official Le Mans 24 Hours test, ending the day's running ahead of the two Porsches.

Lucas di Grassi got behind the wheel of the #8 Audi R18 e-tron quattro to complete an impressive lap of 3m21.375s around the Circuit the la Sarthe.

Earlier in the session, reigning WEC champion Mark Webber set a time of 3m22.270s with the #1 Porsche 919 Hybrid, which was good for P2. The sister #2 Porsche didn’t improve its time in the afternoon and ended the day third.

Andre Lotterer clocked a 3m22.588s with the #7 Audi to take fourth, ahead of the two Toyotas, which ended up fifth and sixth as they both failed to improve in the afternoon.

The times of the Rebellion R-Ones also remained unchanged, and while the ByKolles CLM found half a second in the afternoon, the #4 machine still came up six seconds short of its LMP1-L rivals.

Tristan Gommendy put the #33 Oreca of Eurasia Motorsport on top in the LMP2 category with a 3m36.690s. Signatech Alpine ended the day second thanks to the 3m37.397s that Stephane Richelmi posted in the morning.

G-Drive Racing claimed the third and fourth spots in the baby prototype class, with the #26 Oreca beating the #38 Gibson.

Ford’s return to Le Mans started with the 39th time overall for the #69 Ford GT of Ryan Briscoe, Richard Westbrook and Scott Dixon, who was absent due to his IndyCar commitments.

Ford’s WEC entry’s were just 41st and 45th in the overall list, with the #68 of Dirk Muller, Joey Hand and Sebastien Bourdais coming second to last in class.

Nick Catsburg was drafted in at the last moment at Larbre Competition to replace the injured Paolo Ruberti and surprised with a 3m57.999s during his first day at the Circuit de la Sarthe, which was the fastest time in GTE Am.

The Dutchman pipped the #55 AF Corse Ferrari 458 Italia, which led much of the day with its 3m58.869s from the morning session.

The four-hour afternoon session was hit by a lot of incidents. The first slow zone was implemented after the #99 Aston Martin came to a halt at the first chicane.

In the second hour, the cars were slowed for Pu Junjin, who ended up deep in the gravel trap at the Mulsanne corner along with the #33 Oreca of Eurasia Motorsport.

Yutaka Yamagishi brushed the tyre wall at Tertre Rouge with the back of Larbre Competition’s Corvette C7 in the third hour, but managed to bring his car back to the pits.

Toyota factory driver Kamui Kobayashi had an off-track moment at Mulsanne with little over 90 minutes to go, but successfully brought back the TS050 Hybrid to the pits.

Shortly after, this Tommy Milner suffered a spin at the Dunlop chicane with the #64 Corvette.

With 40 minutes to go the Safety Car was sent out for Tracy Krohn, who beached his Ligier in the gravel at the entrance of Porsche Curves.

The Safety Car had just came back in when the session was red-flagged for a incident concerning the #49 Ligier of Michael Shank Racing on the long straight.

Oswaldo Negri Jr. managed to escape from the incident unhurt, but the guardrail sustained heavy damage, resulting in a premature end to the day.