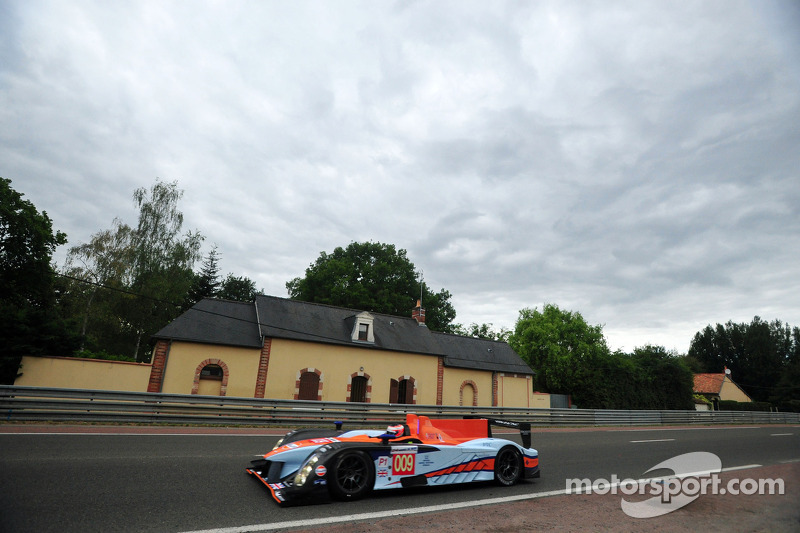 The two Gulf sponsored and liveried AMR-One LMP1 prototypes ran in both two-hour sessions in a bid to continue the rapid data-gathering exercise in the team’s first year in the French enduro with the new car. The 007 car, shared by Christian Klien (A), Stefan Mücke (D) and Darren Turner (GB), ran trouble-free during the opening two hours of track action between 19:00 and 21:00.

The sister 009 car, driven by Adrian Fernandez (MEX), Andy Meyrick (GB) and Harold Primat (CH), briefly suffered an overheating brake duct after being called in for a routine weighbridge check but soon finished the session with plenty of additional mileage under its belt.

During the second two-hour session (22:00-24:00), both cars were again subjected to set-up changes designed to simulate different performance and reliability characteristics. In keeping with Le Mans regulations that state all drivers must attain a minimum laptime in relation to the class benchmark, as well as a requirement to complete three laps in the dark, both cars spent the session lapping the 8.4-mile circuit at a consistent pace. 007 will start the race from 22nd and 009 from 25th.

The Kronos/MarcVDS Aston Martin DBR1-2 again underlined its competitiveness in the LMP1 battle for petrol-powered cars, the all Belgian crew of Vanina Ickx, Bas Leinders and Maxime Martin having a clean run and setting times very close to the unofficial petrol-class polesitter and will start from 12th position.

In the GTE-Pro class, Jota Sport was happy with the balance of its V8 Vantage in the build-up to the start of the race at 3pm on Saturday, as it set times quicker than yesterday’s opening qualifying session. They will start the race 10th in class.

Gulf AMR Middle East worked hard during the first hour of the evening’s action to get its V8 Vantage back in shape following yesterday’s collision with an LMP1 car and will start 6th in class.

Team Principal George Howard-Chappell said: “I am happy with the session today, we had no reliability issues and made some good set-up changes. We are where we thought we would be at this stage and we have done what we needed to do to make sure all the drivers qualified.”