The Art Car was officially unveiled today at the Le Mans circuit.

The Test Day for the 2013 24 Hours of Le Mans provided OAK Racing and its three crews with a busy day. In addition to a full test programme, Martin Plowman, Jean-Marc Merlin and Philippe Mondolot needed to complete at least ten laps of the legendary Le Mans track in order to qualify for the race. They did just that, the team also enjoying the added bonus of seeing Olivier Pla set the fastest time in the LM P2 category. Meanwhile, the OAK Racing Costa Art Car caused a real stir as it was officially unveiled.

A genuine work of art 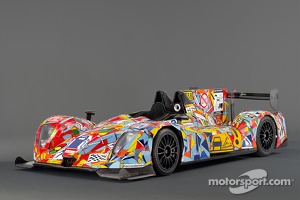 This year, a Le Mans prototype has been used for the very first time as the base of an Art Car. Forever looking for new challenges, OAK Racing and the artist Fernando Costa have achieved something truly unique to celebrate the 90th anniversary of the 24 Hours of Le Mans. For the first time, the sculptor worked directly on the chassis of a car that has an impressive record, with two podium finishes at the 24 Hours of Le Mans in 2008 and 2010.

This one-off design, featuring a collection of road signs welded onto riveted steel plating affixed to the carbon-fibre chassis, will be on display at the 24 Hours of Le Mans circuit throughout the week leading up to the race. The number 45 Morgan-Nissan driven by Jacques Nicolet, Jean- Marc Merlin and Philippe Mondolot will feature livery that is identical to the sculpture. This car will be visible on 16 June 2013, at technical and administrative scrutineering.

Jacques Nicolet, OAK Racing Team Owner: “This project is about the team and the world of motor racing opening up to another area, the world of art. We also wanted to mark the 90th anniversary of the 24 Hours of Le Mans by focussing on road safety, which we feel is an important issue for society, as does the Automobile Club de l’Ouest, which has given this work the title ‘Art Car of the 90th anniversary of the 24 Hours of Le Mans’. This work of art is also a great way for us to further underline our determination to be a major part of the history of the Le Mans event. At the core of this sculpture lies a car that already has a rich history at Le Mans and we have now given it a second life, full of promise. It has been a great day for OAK Racing, because as well as unveiling this one-off concept, we also set the fastest time in the LM P2 category.”

Everything went well on track for OAK Racing’s three Morgan-Nissan LM P2s, despite the changeable conditions. By lunch, the team’s three drivers who had not previously raced on this track - Martin Plowman, Jean-Marc Merlin and Philippe Mondolot - had qualified. 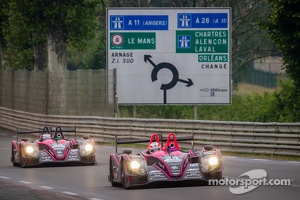 The pace was stepped up significantly in the afternoon, as conditions improved. The number 35 car, driven by Bertrand Baguette, Ricardo Gonzalez and Martin Plowman, began to impress, delivering consistency and good turn of speed before Alex Brundle grabbed the fastest time in the category. However, as the session drew to a close, their team-mate Olivier Pla moved ahead of the rest with a time of 3:38.801. The no.24 Morgan-Nissan therefore ended the day at the top of the LM P2 category timesheets, ahead of the no.36 Alpine-Nissan. The number 35 car finished eighth and the no.45 car was 17th.

OAK Racing’s engineers now have a few days to analyse all the data in order to finalise preparation of the three prototypes for the most important race of the season. The next track event is on 19 June, for free practice and the first qualifying session.

Sébastien Philippe, Team Principal: “It has been a positive day, although the rain disrupted our work programme. The first goal was to ensure all of the team’s drivers qualified for the race, which we did in the morning. Then, as the track dried out towards the end of the afternoon, we showed that our package worked. We’re pleased with our performance level and the working relationship with Dunlop. The only minor problem was that another competitor ran into Jacques Nicolet, so we've got a little bit more work to do. This week, we are going to dismantle the cars in order to service them. These are the final touches before the week of the 24 Hours of Le Mans, but we are well prepared as we have been methodical in our work up to this point.”

Olivier Pla, no.24 Morgan-Nissan LM P2: “It’s always good to know that you’re competitive at a test day, but a 24 Hours of Le Mans race is another matter entirely. What is obvious is that everyone is getting better every year, and that includes us. The team has done a great job, and although it wasn’t easy to work with the weather we’ve had today, it shows just how well have planned things. I’ll be staying in Le Mans tomorrow to work with the team and then I’ll have a few days resting and training before the long week of the 24 Hours of Le Mans.”