Audi once again, claiming a 13th victory, thanks to drivers Tréluyer, Fässler and Lotterer (third success for this trio at Le Mans), part of a 1-2 finish this year.

263,300 spectators! The 24 Hours of Le Mans had a successful 2014 edition with a record attendance. It was a crowd that experienced an exciting race with numerous ups and downs. But in the end, it was Audi once again, claiming a 13th victory, thanks to drivers Tréluyer, Fässler and Lotterer (third success for this trio at Le Mans), part of a 1-2 finish this year. In LM P2, the Zytek Z11SN-Nissan of Dolan, Tincknell and Turvey took home the win. Ferrari claims victory in LM GTE Pro (Fisichella, Bruni, Vilander) and Aston Martin takes the spoils in LM GTE Am (Poulsen, Thiim, Heinemeier-Hansson).


Manufacturers and teams can spend the entire year preparing for Le Mans, but nothing happens as planned. Saturday, after only 90 minutes of racing, a heavy downpour threw the Mulsanne Straight into disarray, leading to a chain of accidents terminally affecting the No. 3 Audi driven by Marco Bonanomi and seriously slowing the progress of the No. 8 Toyota, driven by Nicolas Lapierre.

Once the nicer weather returned, victory seemed for a long time in the hands of the No. 7 Toyota, which at the halfway point, enjoyed nearly a lap advantage on second place. But just a few minutes later, the Japanese prototype came to a stop at Arnage with electrical problems. "It tears my heart out...I don't know what to say," was all that driver Kazuki Nakajima could muster. 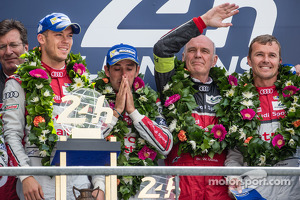 From then, fans could start believing in a 10th win for Tom Kristensen, enjoying a solid lead with teammates Lucas di Grassi and the impressive Marc Gené, who was incredibly quick in the Audi R18 e-tron quattro that he was not supposed to drive this year (the Spanish driver was called in to replace Loïc Duval following the accident from Wednesday evening). But then, a little after 11 a.m., the No. 1 Audi came to a stop on the Mulsanne Straight, then got going again like nothing was wrong, then a moment later slowed again...turbo issues.

An incredible sight: for its big return to the top class, Porsche was in the lead! What followed was a tight battle measured in tenths between Mark Webber and André Lotterer...But only two hours before the finish, mechanical issues for the Porsche forced retirement. Although the Stuttgart marque goes home empty handed, their good performance will be noticed by more than one. For sure, be on the look out for Porsche next year.

From this carnage, the No. 2 Audi emerges, driven by Fässler-Lotterer-Tréluyer and held up in the night by a turbo problem, claiming victory. The trio's third and Audi's 13th!

In second place, the No. 1 Audi finishes three laps back while Toyota comes home with a podium for Davidson-Lapierre-Buemi. Finishing in fourth, the consistent race by Prost-Heidfeld-Beche gives the Rebellion Racing team a hard fought prize.


The winning LM P2, the Zytek driven by Dolan-Tincknell-Turvey, finishes fifth overall. A surprise for rising star Oliver Turvey, who was called up on Thursday to replace Marc Gené! The Ligier JS P2 of Badey-Thiriet-Gommendy comes home second in almost a disappointing finish so much the new Onroak Automotive dominated the majority of the race. The Alpine of Panciatici-Webb-Chatin completes the podium.


Every year, the LM GTE Pro battle is one of the most exciting parts of the race. This year, fans once again saw a great race between the four manufacturers entered: Ferrari, Porsche, Corvette and Aston Martin. Without a doubt, the driver squad to beat in this 82nd edition of the race was that of the No. 51 AF Corse Ferrari. Gianmaria Bruni, Toni Vilander and Giancarlo Fisichella were strong against the charging Corvette in the night and then Aston Martin in the morning. This is the second time the all-star trio claims the class victory for the Italian marque at Le Mans, following up on their success in 2012. Gianmaria Bruni becomes a three-time winner in GT while Giancarlo Fisichella and Toni Vilander now have two wins apiece. 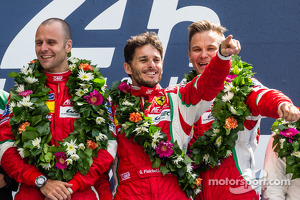 The Corvette team showed promise. For their first time at the 24 Hours of Le Mans, the new C7.R showed good performance and competitiveness. Although the No. 73 of Jan Magnussen, Jordan Taylor and Antonio García was spared major issues, the No. 74 of Oliver Gavin, Tommy Milner and Richard Westbrook had a more difficult race. Having fought for the win and finishing only a lap behind the winning Ferrari 458, Doug Fehan's team can be satisfied with the accomplishment.

Aston Martin Racing made an impression for sure, but the only V8 Vantage to take the start in LM GTE Pro (the No. 99 withdrew after qualifying) was unable to rally the finish. Darren Turner, Stefan Mücke and Bruno Senna delivered a great battle until the 18th hour when the V8 Vantage gave up the ghost. Consolation prize, and a telling achievement, for the No. 97 Aston Martin is it's fastest race lap: 3:53.763.

In the Team Porsche Manthey clan, the two 911 GT3-RSR entries were never in a position to score the class win, likely due to a deficit in top speed. Nevertheless, the reliability of the No. 92 gave drivers Marco Holzer, Frédéric Makowiecki and Richard Lietz a third place finish while the sister car (No. 91) finished the day with a 30 lap deficit following major mechanical issues.

Finally, RAM Racing's debut at the 24 Hours of Le Mans was unsuccessful for Dan Shufflebottom's team. The Ferrari 458 Italia of Matt Griffin, Álvaro Parente and Federico Leo retired after 140 laps.


In the LM GTE Am class, the No. 95 Aston Martin held off the impressive AF Corse armada of six cars. Kristian Poulsen, David Heinemeier Hansson and Nicki Thiim take home the spoils in these 2014 Le Mans 24 Hours, three laps ahead of the No. 88 Proton Competition Porsche (Ried-Bachler-Al Qubaisi) and the No. 61 AF Corse Ferrari 458 Italia. Of note, is the No. 77 Porsche of Dempsey, Long and Foster, finishing 22nd overall and fifth in class. Barthez, Ayari, Pons (Ferrari No. 58) took 27th overall/9th in class, while Hallyday, Narac, Armindo (Porsche No. 76) took 29th overall/11th in class.


It was a short-live appearance for the Nissan ZEOD RC, as it was only able to complete five laps of the Circuit de La Sarthe before retiring.

Third round of the FIA World Endurance Championship, the 24 Hours of Le Mans was the race not to miss, as points counted double. The next race on the calendar will be held at Austin, Texas (USA), in September 2014.

First podium for the Ligier JS P2 at Le Mans!