The 90th edition of the 24 Hours of Le Mans had been billed as a party from the beginning. On paper, everything was just right for close fights in every class: Audi/Toyota in LMP1, Rebellion/Strakka in LMP1 “privateers”, Morgan/ORECA/Zytek/Lola in LMP2, Porsche/Ferrari/Viper/Corvette/Aston Martin in GTE-Pro and Porsche/Ferrari/Aston Martin/Corvette in GTE-Am. At the end, Audi took their 12th win, Toyota Racing gave it their all, Porsche confirmed their return to endurance racing, IMSA Performance Matmut gave the Porsche 997 RSR its final victory at Le Mans after offering the model it’s first victory at La Sarthe, and Tom Kristensen becomes the equal to Sébastien Loeb in a completely different type of racing. 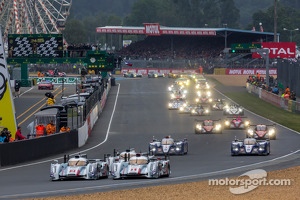 For the rest, what else is there to say? Originally, we had everything ready. Ready for the Live-Text on Endurance-Info, ready to see the impact that three extra liters given to the Toyotas would have on the outcome of the race. How many laps could they go compared to the Audis? 11? 12?

The start held true to its promises with the Toyotas being more competitive out of the block than expected, and rain starting to fall only 10 minutes before the start was given by Jim France. We quickly fell into the trap of hoping for a fierce battle between the two big constructors. That fight would only last two laps, before Allan Simonsen (leader in GTE-Am) would drive over the painted rumble strip at the exit of Tertre Rouge, losing control and hitting the outside barrier before coming to a stop in the middle of the track. The onboard camera from the Corvette who was following the Danish driver shows the Aston Martin Vantage GTE lose control and lunge head first into the barriers. We’ve heard Simonsen underwent more than 20Gs during the initial head-on impact, and even more in lateral Gs from the second. The original announcement is that the driver is OK. How wrong that statement would turn out to be.

The media center, and the rest of the world, would eventually learn that Allan Simonsen had died from his injuries. How could anyone be excited about how many pitstops the LMP1 cars would be doing over a 24 hour period when such a dark mood overcame the entire facility. AMR’s race continues, according to the wishes of the deceased’s family, something we can only respect. With four cars remaining on track, Aston Martin Racing is no longer thinking of celebrating its 100th anniversary, but to finish at the top of the podium in order to remember their fallen teammate. Contrary to what some media were reporting, it’s not because he was running in “Am” class that Simonsen was an amateur. The Dane had a very long and distinguished résumé. Jan Sturve, owner of the Young Driver AMR team, will announce future plans, if any, for the team in due course. 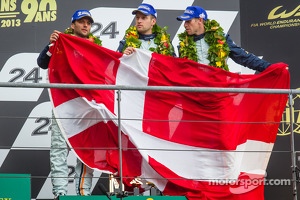 In the end, this edition of the 24 Hours of Le Mans would be a story of safety barriers. With more than 4 hours of safety car periods and 12 interruptions, the competition completed a whole 30 laps less than last year. We’d already had a few scary moments during the qualifying sessions with offs from Pierre Thiriet, Christophe Bourret and the spectacular flight of Tracy Krohn in the Ferrari. By some miracle, all three had come out of their incidents without injury. With a quarter of the field composed of ‘rookie’ drivers, one could have a few worries for the race especially since the practice and qualifying sessions were held between rain shower and red flag periods.

No fewer than 21 cars were relegated to the back of the grid because all or part of their driver lineup didn’t complete the required laps during qualifying. That had never been seen at Le Mans! Therefore, there were worries that there would be major issues during the race, but the Le Mans rookies did well. That said, there were still some scary moments. There was the frightening crash for Tony Burgess in the Lola/HVM-Status GP, where the car literally split in two. Later in the night, it was Howard Blank’s turn to put a dent in the barriers in the S curves before Tertre Rouge in his Ferrari/AF Corse, leading to almost an hour’s worth of repairs to the safety barrier.

Sunday morning also left us breathless as Andrea Belicchi had a major off on the Mulsanne Straight in his Rebellion Toyota. Once again, the barriers were damaged, and there was a long safety car period in order to conduct reparis. Fred Makowiecki then had a violent off in the Playstation chicane. The GTE Pro race leader becoming a passenger as the Vantage slid out of control in the slippery conditions. There again, the barriers were damaged. Then there was Nicolas Lapierre’s off (getting the point here?) during attack in the Toyota #7 on Sunday afternoon. Again, victim of a slick track, the TS030 HYBRID went off at the Porsche curves and hit the tire barrier, but somehow was able to limp back to the pits.

A month after a 24 Hours of the Nüburgring cut short by nearly half thanks to weather, the 2013 Le Mans 24 Hours were also shortened even though there were no red flags involved. 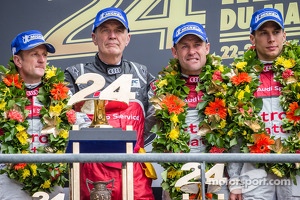 We had planned on doing an analysis of the race but we don’t really know where to begin or what to include really. Today, our feelings are mixed. Ironically, our exit from the track forced us to pass right by the exact location of Simonsen’s accident. A Danish driver has won the Le Mans 24 Hours for the ninth time, but the Nordic country is in mourning. One thing seems certain at this point, Tom Kristensen will return alongside McNish and Duval to compete in next year’s Le Mans 24 Hours. Kristensen had promised his recently deceased father that he would win the 24 Hours of Le Mans in his honor. But he preferred honoring his fallen countryman this year with his victory. For 2014, we hope Tom will be able to dedicate his 10th victory to his father.

Level 5 at Le Mans: The race after the race