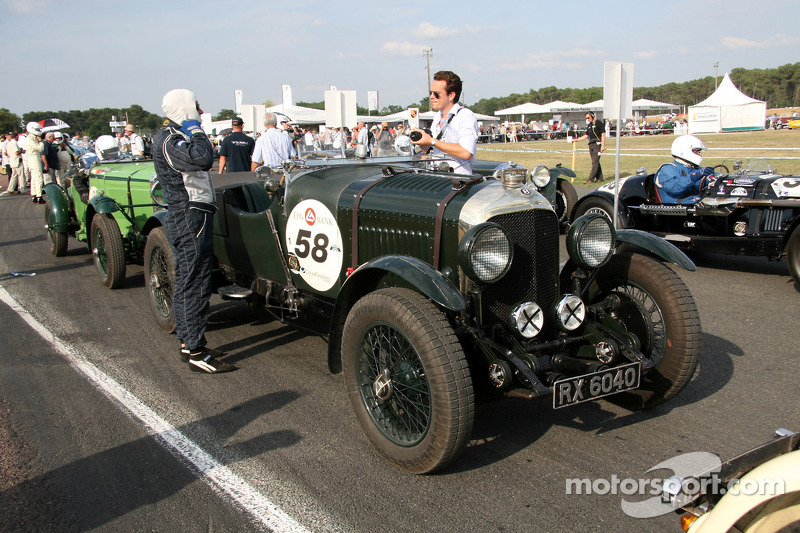 Ninety years ago this coming Sunday 26th May, the first Le Mans 24 Hours got under way. Since then what was called the 24-Hours Endurance Grand Prix has become one of the greatest motor races in the world.

A quick flashback to the first event during the spring of 1923, whose weather was even worse than is currently the case (!), before the festivities linked to this anniversary kick off...

On 26th May 1923 at 16h00 the start to what would become the greatest endurance race in the world was given in pouring rain. Thirty-three cars crewed by two drivers each set off to do battle with one another in dreadful weather conditions (rain, wind and hailstones) on a rutted gravel road that soon became pock-marked with muddy potholes as the stones began to litter the surface.

Everything that makes the race what it is today was already revealed to the spectators: refuelling done with the utmost haste, cars thundering through the night headlights blazing in front of the full grandstands and a huge illuminated sign giving the places. Despite the gusts of wind the party was in full swing at the circuit! 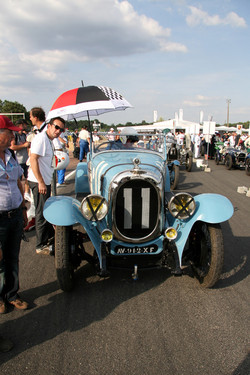 While there was no question of a fireworks display because of the weather jazz bands got people dancing at the balls, and strong cocktails warmed up the clients at the American Bar that had come straight from the Champs Elysées, while Radio Eiffel Tower broadcast concerts.

In these appalling conditions victory went to a French car and drivers as Lagache and Léonard in their Chenard & Walcker took the flag in first place, while Duff and Clement put on a stunning performance by clinching the fastest lap in their Bentley.

Thus, the discussions at the 1922 Motor Show between Charles Faroux, boss of l’Auto newspaper, Georges Durand, ACO General Secretary, and their faithful financial partner Emile Coquille from the Rudge-Whitworth Company were transformed into concrete form.

Since then, ninety years have passed, and 80 Le Mans 24-Hours races have taken place overcoming the financial crash of 1929, the events linked to the Popular front in France in 1936, WWII, the 1955 catastrophe, the recurring petrol crises since 1974, the dissensions with the world championship, and the 90-year-old-lady is still as fit and spry as ever!

Of those makes in the first race only Bentley and Bugatti remain in the firmament of the motor car in terms of worldly prestige. The Le Mans 24-Hours circuit has become the temple for motor sport events.

At a time when the Federation Internationale de l’Automobile (FIA) is working all over the world to save 5 million lives (victims of the lack of road safety infrastructures in emerging nations), let’s bet that the Le Mans 24-Hours race has helped to save millions of lives throughout the world thanks to its on-going research to improve the everyday driver’s motor car.

Since the start, the economic fallout of the event is equivalent to the organization of three Olympic Games in Le Mans. It brings France, the region and the department a windfall like the snow in Courchevel or the sea at Saint Malô, and to the town of Le Mans itself such renown that after Paris and Bordeaux, it is the third-best known French city in the world!

The Le Mans 24-Hours race has become a legend; it has forged links between the people involved; it has revealed people with irresistible charisma and written pages of thrilling history that have inflamed the ardour of its fans, racing enthusiasts and people everywhere.

The expected revolution linked to the gradual disappearance of fossil fuels is being anticipated, and while the electricity-powered racing car still needs further tweaking, the hydrogen fuel cell that will race in this year’s event thanks to the Green GT proves that human ingenuity knows no bounds. Future generations will understand this by paying tribute to the inventiveness that this race dedicated to progress will have fostered.

Friday 31st May : Homage to the drivers


During a private evening – by invitation only – homage will be paid to the men who, by their talent and their courage, have written the history of the Le Mans 24 Hours. During this special evening Tom Kristensen, Jacky Ickx, Derek Bell, Frank Biela, Emanuele Pirro, Yannick Dalmas and Henri Pescarolo, all of whom have won the event at least four times, will be inducted into the Le Mans 24-Hours Drivers Hall of Fame in the presence of the 90-years jury who elected the 11 cars of the legend, plus people from the world of art, show business and sport, in addition to teams, partners of the event and representatives of the media.


In partnership with the Sarthe General Council, a mini-presentation tour of the collection of Le Mans 24-Hours posters will take place in different towns in the department accompanied by the Chenard & Walcker victorious in 1923.

Every evening from 22h00 onwards, a striking visual show retracing the greatest moments of the race since 1923 will be projected on the façade of the Eglise de la Visitation, Place de la République in the centre of Le Mans.


During scrutineering and admin. checks on the Place de la République, decorated in the colours of the 90th anniversary of the race, the town of Le Mans will put on an exhibition of the history of scrutineering linked to the different places where it has taken place since 1923.


In partnership with the town of Le Mans, the Pontlieue hairpin, which brought the race into the centre of the town, will be recreated exactly as it was during the five years it was part of the circuit with advertising hoardings of the era, fencing, footbridge, etc, including the café that still exists redecorated in the 20s’ style!

Homage will be paid to the 11 cars that have written the history of the race, which were elected at the start of the year by the surfers and the special jury. An exhibition centre for these legendary cars, brought to Le Mans from all over the world for the occasion, will be open to the public in the Le Mans 24-Hours village from Wednesday 19th to Sunday 23rd June.

During the pitwalk (pit lane open to the public) on Friday 21st June they will be lined up on the track on the slope leading up to the Dunlop Footbridge that will be decorated in an eye-catching fashion.

The future comes to Le Mans: ALMS/GRAND-AM synergy to be showcased at 24-Hour classic