The outcome of the greatest endurance event in the world is never a foregone conclusion!

The 82nd Le Mans 24-Hours race should take place in hot weather conditions. The event start tomorrow at 15h00 and it looks particularly indecisive. Toyota with one car on pole is the bookies’ favourite. However, the outcome of the greatest endurance event in the world is never a foregone conclusion!

The first factor and it’s a very important one is that the weather should not perturb the unfolding of the race: the sun will shine this weekend and the temperatures will vary between 22°C tomorrow at 15h00 and 10°C during the night of Saturday to Sunday. This is great news for the public and the sporting aspect!

The excellent conditions promise a fast pace, which is all the more realistic as the new slow zone procedure will reduce the impact of race incidents. Its principle is the neutralisation of only a part of the circuit and not the whole layout thus reducing the impact of the deployment of the safety cars. 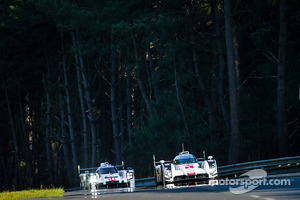 So as all the conditions seem right the strongest should win. But the day before the start it’s impossible to know who’s the strongest. Unless there is a very improbable series of incidents one of the seven works driver line-ups entered by the three manufacturers in LM P1 Toyota, Audi and Porsche should emerge victorious.

After the first two rounds of the FIA World Endurance Championship (Silverstone and Spa-Francorchamps), the test day and the two evening’s practice Toyota seems to be the favourite. As the technical director of the endurance programme Pascal Vasselon says : “the team has never been as well prepared for the biggest event of the year.” Thanks to a lap in 3m 21.789 sec Kazuki Nakajima put the no.7 TS040 on pole, becoming the first Japanese driver to achieve this feat. It’s also the first time for 15 years that Toyota has been in the no. 1 spot on the grid. In 1999 this didn’t bring any luck to the manufacturer when it was the odds-on favourite and in the end Germany won!

This year Germany is represented by two manufacturers starting with Audi. Back for the 15th year on the bounce the firm has racked up 12 victories so the figures speak in its favour. But since the start of the se ason the winning machine has stuttered. After the Silverstone debacle, Audi had problems getting back in the groove at Spa and the two evening practice sessions for the Le Mans 24 Hours have done little to reassure the Ingolstadt team. On Wednesday Loïc Duval hit a wall (which led to him being replaced by Marc Gené for the race) and then Lucas di Grassi went off the next day. 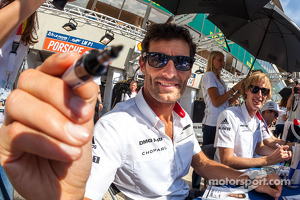 Finally, the R18 e-tron quattros hybrids finished in 5th, 6th and 7th places in qualifying the last three in the LM P1 H category. However, during the press conference on Friday the drivers were all very confident, almost supernaturally so saying that they had, “a perfectly well set-up, very efficient easy to drive car.” Indeed Audi has always been at its most pragmatic when it looked like it was beaten in advance.

Germany is also represented by Porsche which is making its comeback to the blue riband category. It holds the record for the number of outright victories (16) and it is determined to not to let Audi (12 wins) equal or beat this record. To achieve this aim, the competitions manager Hartmut Kristen has done a great job honing his weapons as the 919 Hybrid prototype was the first of the new-generation cars to start track testing more than a year ago. His driver choice is also proof of his unswerving determination like Mark Webber who looked more determined than ever when he went through scrutineering on Sunday. The two white cars that qualified in 2nd and 4th places will inject a lot of excitement into this weekend’s race. But will they be reliable?

A question mark also hangs over the reliability of the cars in the LM P1 L category, the two Rebellions which have just come out of the Oreca workshops and are short of development for their first 24-Hour race.

With 17 cars representing four different chassis (Oreca, Morgan, Ligier and Zytek) and three engine manufacturers (Nissan, Judd, Honda), the LM P2 category will be the theatre of a no-holds-barred battle. Young chargers like Turvey, Lancaster, Mardenborough, Brundle, Chatin, Webb, Dolan and McMurry, (aged 16 !), will keep up a searing pace during the race. It remains to be seen which team will best combine outright speed and consistency.

In the Grand Touring Pro category the race looks very open between last year’s winner Porsche and its usual rivals Aston Martin, Corvette and Ferrari. In practice the Italians were the quickest in GTE Pro and AM but the gaps are tiny. Like last year the outcome in the classes could play out in the closing minutes of the race.

The ZEOD RC, running outside the overall classification, is blazing the trail for Nissan, which recently announced its return to fight for overall victory in 2015.

54 cars will start the race following the withdrawal of the no. 99 Aston Martin after its accident on Wednesday evening.

The 2014 Le Mans 24 Hours has all the makings of an exceptional race. Fernando Alonso knows this and the Spaniard will give the start tomorrow at 15h00.