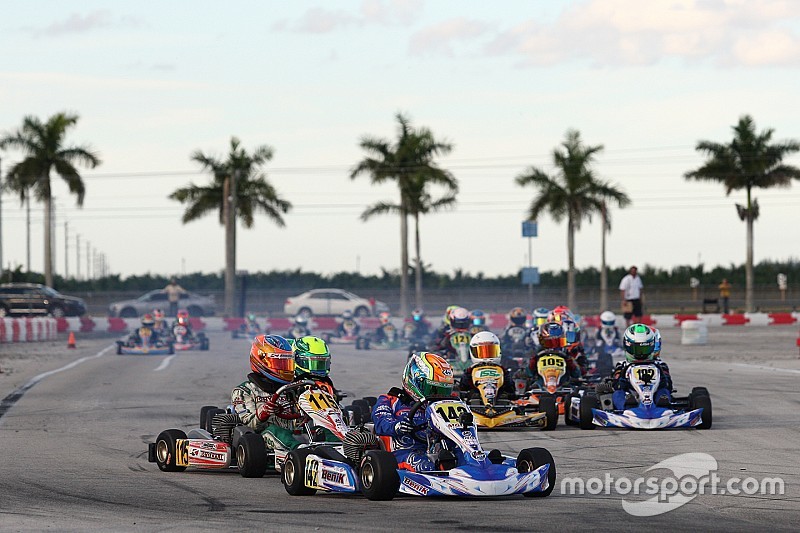 MaxSpeed Entertainment opens up its six-race winter championship known as the Sofina Foods Florida Winter Tour presented by FIKSE Wheels this weekend at the Homestead-Miami Speedway and it’s bound to be a big one.

Several professional drivers have registered to compete against many of the best kart racers from North America in the very popular international karting program.

Only two weeks into the new calendar year and another busy karting season is about to begin. MaxSpeed Entertainment opens up its six-race winter championship known as the Sofina Foods Florida Winter Tour presented by FIKSE Wheels this weekend at the Homestead-Miami Speedway and it’s bound to be a big one.

Several professional drivers have registered to compete against many of the best kart racers from North America in the very popular international karting program.

The Florida Winter Tour is split up into two separate championships, with each competing in three rounds over the next three months. This weekend will feature drivers competing on the Vortex ROK engine platform across seven different age and engine categories, while next weekend will see seven classes utilizing the Rotax Max powerplant.

Both championships have big prizes up for grabs along with the bragging rights that go along with them as a prestigious FWT champion. Both programs also have a new weekend race format as organizers have moved past the typical double-race weekends and introduced the CIK standard with Qualifying, Heat races and a PreFinal helping set the grid for Sunday’s all-important Main events.

2016 marks the 17th season for the Florida Winter Tour, but only the second under management and ownership of the MaxSpeed Group. With a year of event management under their belts and a passion to grow their program and the sport itself, MaxSpeed appear committed to building upon the foundation set in 2015.

The permanent karting track in the parking lot of the Homestead-Miami Speedway features a challenging 7/10-mile circuit that is very popular among drivers. It’s lightning-fast and made up of mainly 90deg and 180deg corners, forcing drivers to utilize and respect curbs both at apex and exit. The facility is a bit of a sight for sore eyes, but the racing it provides makes up for the lack of visuals.

A few of the headlines entering this weekend’s event include…

All of the 2016 Florida Winter Tour ROK Cup class champions, with the exception of Micro ROK, will earn the opportunity to race at the ROK Cup International Final in Italy later this year. The event draws Vortex ROK racers from around the world each year and is hosted by the OTK Group at the famed South Garda Karting track in Lonato, Italy.

Barrichello and Piquet Jr. to do battle in ROK Shifter

Former Formula 1 drivers Rubens Barrichello and Nelson Piquet Jr. are entered in this weekend’s event and will compete in the premier category, ROK Shifter. The six-speed gearbox karts provide great entertainment and there is a full field of karters looking to show the motorsport stars they mean business. The likes of Costa Rican Daniel Formal, a multi-time Florida Winter Tour champion, and Americans Austin Garrison and AJ Myers will be sure to challenge for the win. Sportscar drivers Remo Ruscitti and Hayden Duerson as well as Brazilian Danilo Dirani have also entered the category.

Rookies looking to break through in ROK Junior

For many drivers, a fresh calendar year means the opportunity to advance up a category and for those looking to make an impression on their young racing careers, moving up to Junior is one of the biggest steps in the karting ladder. Three of these young drivers making their junior debut this weekend – Nicholas d'Orlando, Lachlan DeFrancesco and Matthew Latifi – all contended for the MINI ROK title a year ago and all hail from Canada. But they will have sophomore Juniors like Dylan Tavella, Michael d'Orlando, Aidan Keel, Gianluca Petecof and Eduardo Barrichello (son of Rubens), to deal with if they want a chance of stepping on the podium this weekend.

No driver was even able to come close to Kyle Kirkwood in 2015 as the Florida pilot delivered five victories in five races to claim the ROK Senior championship. Back for another season, Kirkwood leads a field of drivers with plenty of potential, including a couple of class rookies who have moved up from Junior. Mexican Javier Gonzalez as well as American's Ryan Norberg, and Stirling Fairman could be the best chance to give Kirkwood a run for the title along with rookies Roman De Angelis and Zach Holden.

The two categories for the youngest competitors of the sport will be the busiest this weekend. Last season the Mini-ROK category was so big it needed to be split up into groups for the heat races and it appears that will happen again in 2016. There are also a few names that stand out on the Mini-ROK entry list including Sebastian Montoya, son of Juan Pablo Montoya, Fernando Barrichello (another son of Rubens and an FWT race winner in 2015), and Jak Crawford, 2015 ROK Cup International Final vice-champion.

Finally, this weekend’s event will be broadcasted online via the MaxSpeed Entertainment Live broadcast. Live event streaming will be available starting Friday at http://bit.ly/1mDVTsQ.