There's only one Emerson Fittipaldi! Or is there? 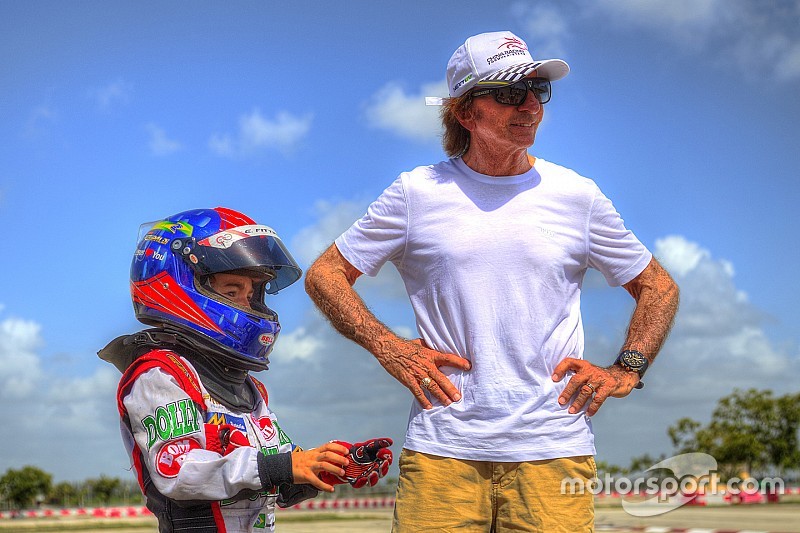 July 4th is a great time to be in America. And while most of the country was hanging out with friends and family, I was having a fun time too – at the kart track at Homestead-Miami Speedway watching a second-generation youngster develop what could be a great talent.

This is ‘Little Emmo’. His father, the two-time F1 world champion and two-time Indy 500 winner that made the Fittipaldi name so famous, is here too encouraging him from the sidelines.

Emerson is one of the nicest racing legends you’ll ever meet, right up there with Jackie Stewart and Stirling Moss. And, as you’d expect, he’s quite different to your regular ‘karting dad’.

He’s the polar opposite of the pushy father, and instead trusts in driver coach and team boss Rudy Ramsaroop to run the operation (RYSA Racing). Even on this scorchingly-hot Florida summer’s day, ‘Big Emmo’ happily stands under a tree and gives the thumbs-up every time Little Emmo buzzes past.

Then it’s back to the pits for a debrief, and a few words of sage advice. He doesn’t need much: Little Emmo’s driving style is as smooth as you like – very impressive.

When I mention that, Ramsaroop muses, “The apple didn’t fall far from the tree, did it?” I tell Fittipaldi that I think Little Emmo’s driving style is quite reminiscent of Mika Hakkinen; quite early on the brakes then carrying massive corner speed, and there’s a smile on his face: “He’s very smooth, yes.”

The Fittipaldis were recently at Battersea Park for the Formula E finale – Emerson was delighted by Nelson Piquet Jr’s title success and is sporting a China Racing hat to prove it – and despite the lengthy flight to Miami, Little Emmo had one thing on his mind.

“All the time on the plane, he said ‘I want to go karting’ – he was insisting all the way,” says Fittipaldi. “So, we got off the plane and I asked ‘are you sure?’ – he said ‘yes’, so we went straight to the racetrack. He is that keen, all he wants to do is drive.”

Ramsaroop is as impressed with the ability that Little Emmo has shown, as much as his enthusiasm to get behind the wheel.

“What I really like about him is his ability to retain the information you tell him,” says Ramsaroop. “And then he implements it. To see that at such a young age suggests a bright future.”

Coaching at such a formative stage, without having too much pressure heaped on young shoulders, is absolutely vital according to Fittipaldi.

“In my opinion a father always has to have a professional coach to help the kid in the proper way,” he says. “If you start correctly, your foundation for the future is correct.

“The emotion of a father can get on top of a kid. I prefer to stand a little back, even with all my experience, and just offer some little advice.”

This approach is proved as Fittipaldi’s expert ear hears his son lifting out of the throttle for Homestead’s daunting ‘Indianapolis’ left-hander. He subtly taps Jr on his shoulder and whispers: “you can do that corner flat, try it”.

After a break – as soon as the helmet is off the iPad is on, and Little Emmo is enjoying some video game-time as he cools off in the air-conditioned truck trailer – he’s soon back on track.

Advice heeded (what did Rudy say about him implementing all available information?) he slashes half a second from his laptime. Another track record.

As strange as it sounds, the Brazilian kart championships will be Emerson Fittipaldi’s next step on his racing journey. Remember the name… well, that’s not difficult.