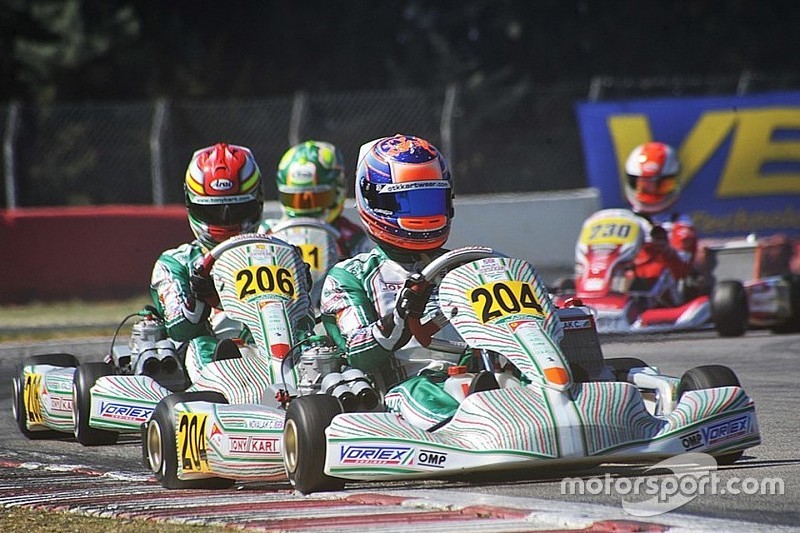 Anglo-Swiss youngster Clement Novalak has clinched one of the most reputable karting titles of the season, the WSK Super Masters OK crown.

The Tony Kart driver entered the last of the four-round championship with a sizeable lead in the standings, and strong form in the season finale enabled him to comfortably secure the title.

The championship started with a rookie driver dominating at a wet Adria, as the 15-year-old Ulysse De Pauw won by over four seconds.

De Pauw's points lead only lasted for one round, as he only managed an eighth place in the subsequent race at Laghi.

Novalak on the other hand was victorious despite finishing second, because of a penalty to the original winner Tom Joyner for a bad manoeuvre on David Vidales, another rookie, who rounded out the podium in the first race.

The win gave Novalak a seven-point lead over De Pauw with Travisanutto a further 23 behind.

Novalak then won again at La Conca and lead by 72 points, having taken full advantage of De Pauw only finishing fourth and Travisanutto missing the final due to a pre-final retirement.

He cemented that lead by being fourth and first in the first two of three point-scoring parts of the season finale, the heats and pre-final.

He started the race from pole, but ended up only fourth with veterans Karol Basz and Pedro Hiltbrand dominated, but Novalak was still comfortably the champion.

Basz's win gave him second in the standings, as De Pauw had to settle for third after a mechanical retirement.

Local driver Andrea Rosso, driver of Baby Race, won the OKJ class of the series in a comfortable fashion.

Rosso started to lead the championship in the first round and never gave up the position, extending his advantage in each final.

He beat Jack Doohan, son of motorcycle legend Mick, by almost three seconds at Adria, and was even more comfortable at Laghi.

His two closest followers at halfway point were Doohan, who was third in the second race, and Russian sophomore driver Pavel Bulantsev.

While Rosso comfortably kept the lead by finishing fourth in the third round, the aforementioned duo was replaced by the race winner Leonardo Marseglia and Harry Thompson.

Yet, it was another two drivers, Mattia Michelotto and Barbadian driver Zane Maloney, who locked out the top two in the season finale.

Michelotto took second in the standings as a result behind Rosso, who was fifth in the final race, as Luigi Coluccio completed an all-Italian top three.

Another Italian Gabriele Mini won the 60 Mini category, while Sodikart's Bas Lammers was crowned as the champion in the KZ2 shifter class.

Large contingent of racing in Ocala