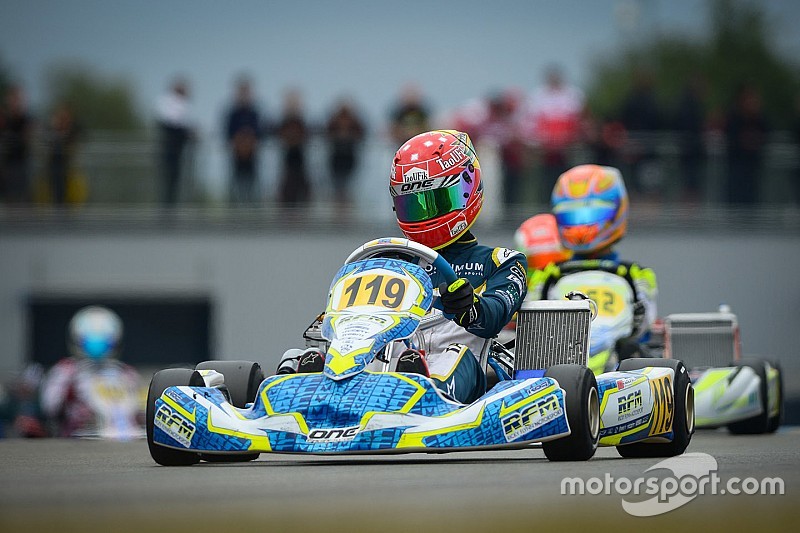 Sami Taoufik claimed the 2017 CIK-FIA European OK championship after finishing fifth in the final round at Kristianstad.

Taoufik, 15, who is in his first season in senior karting, had the most consistent campaign in the five-round championship, as he made it to the top five in four finals.

He kicked off with a fifth place at Sarno, where then 13-year-old youngster Theo Pourchaire shone by winning.

However, that win turned out to be Pourchaire's standout result as he could only finish two of the remaining four finals and his best result was 10th.

Instead, it was David Vidales taking over the championship lead after Round 2 at Fernando Alonso's karting circuit, having finished the first two rounds in third.

The Spanish round of the championship was held in greasy conditions and experienced local driver Pedro Hiltbrand mastered the track to win.

But then it was Vidales's and Hiltbrand's turn to run into trouble in the subsequent Le Mans round, as both failed to even qualify for the main race.

There, it was Lorenzo Travisanutto triumphing, narrowly holding off Taoufik.

While Vidales kept a one-point championship lead, Taoufik took over at Alaharma, the track where the Moroccan driver was victorious after a race-long fight with Pavel Bulantsev and Hiltbrand, the latter taking second in the standings.

Taoufik could only finish fifth in the season-ending Kristianstad race, which saw Fin Kenneally becoming a fifth different winner in five rounds, but Hiltbrand's retirement meant his title was not in danger.

Taoufik completed the campaign with a 13-point lead over another rookie Bulantsev, 18-year-old Travisanutto, and 2015 world champion Karol Basz.

Forza Racing's Jonny Edgar took the junior crown in convincing fashion, having been a frontrunner in all five rounds of the championship.

The Briton kicked off the campaign with a lights-to-flag win at Sarno, and crossed the line first at Circuit Fernando Alonso before a time penalty for making contact with another kart relegated him to the outside of top 10.

He was in victory contention at Le Mans but had to settle for fourth before winning in Finland and ensuring his title with a fourth place in Sweden.

Harry Thompson completed a British 1-2, as he stood on the podium three times but never won.

Jack Doohan, son of motorcycle legend Mick, dominated the final round of the series to take third.