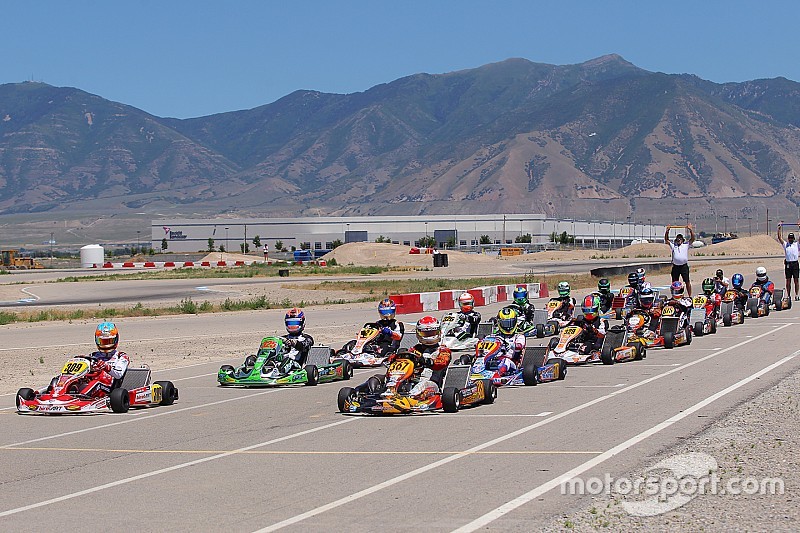 Along with surprise winners in Round 2 of the Sofina Foods US Open Karting Championship at Utah Motorsports Campus, Oliver Askew, Kyle Kirkwood and Jeff Kingsley proved their class. Cody Schindel reports.

Continuing his reign on the Rotax Senior category, Oliver Askew went flag-to-flag in Sunday's US Open Final, building an early race gap and continuing to pull away until the checkers. With a late race charge, fellow Floridian Austin Garrison advanced to second, overtaking Kellen Ritter and Luke Selliken with only a few laps remaining. The drive earned Garrison an invitation to the Rotax Grand Finals held later this year in Italy where he will join Askew as part of Team USA.

It was a four-kart battle in the Micro-Max Final as polesitter Diego LaRoque led a train that included Josh Pierson, Carson Morgan and Santiago Trisini. The leaders ran status quo until with only three laps left, Morgan made his move to the lead inside corner 1, shuffling LaRoque back to fourth.

The battling continued from there and on the final lap LaRoque attempted to return to the point in corner 11. Erupting three wide as they approached corner 12, contact between all three allowed Trisini to slide underneath and grab the lead. Holding on through the final few corners, Trisini edged LaRoque at the line with Pearson completing the podium. The silver lining for LaRoque was continuing to hold the lead in the championship and earning the invitation to the Rotax Grand Finals.

Ryan MacDermid led the way at the start of the Rotax Junior Final as a mêlée in Turn 2 saw fourth-place starter Matthew Latifi pointing in the wrong direction. Nick Brueckner, Manuel Sulaiman and Jacob Gulick raced hard for second allowing MacDermid to pull away at first before the group settled down and utilized the draft to close back in on the leader. Sulaiman disposed of Brueckner just past halfway to take second place as while at the same time Dylan Tavella was charging forward, moving past Hannah Greenemeier for fourth. Brueckner continued to fall down the order as the laps wound down with a flat tire ending his chances at a podium.

Continuing to hit his marks, MacDermid maintained a gap of five kart lengths until two laps to go when Sulaiman dived to the inside of corner 11 and grabbed the lead. MacDermid tried to counter the move on the exit and the two made contact, spinning MacDermid into the dirt, moving Tavella to the lead in the process and allowing Greenemeier and Mathias Ramirez to grab second and third.

Just after seeing the white flag, Greenemier tucked to the inside of Tavella in Corner 1 and took the lead but only for a second as she ran wide and Ramirez slid by both and into P1. Holding on through the final lap, Ramirez scored the win just ahead of Tavella and Greenemeier and with it Ramirez vaulted to the championship lead and secured his position on Team USA for the Rotax Grand Finals.

He had to push a little harder than he expected but Jeff Kingsley completed the perfect weekend with victory in Rotax DD2. Dev Gore worked by Alessandro Bizzotto on the opening lap for second place and closed in on Kingsley through the first five laps, but Kingsley took notice and put his head down, breaking free just past the halfway mark and then cruising to victory. Gore was two and a half seconds back at the line while Bizzotto was alone in third.

There was a great battle for fourth place, which featured two of the DD2 Masters drivers. Nathan Mauel showed that he had enough pace to run with the regulars and passed DD2 Senior driver Lawson Nagel for fourth and created a gap between himself and Luis Zervigon. Holding off Nagel to the line, Mauel secured his second US Open victory of the season and his invitation to the Rotax Grand Finals. Zervigon ranked second of the DD2 Masters followed by Joseph Licciardi, who was ninth overall, third of the Masters.

Another convincing victory for Gonzalez

Tyler Gonzalez is proving that he is the best Mini-Max driver in America this year as he secured another dominant victory. Leading the field to green from pole position, Gonzalez built up a big lead early and let his competitors battle behind him as he cruised to victory, his second at the US Open in 2016.

It was a great race for second featuring six drivers all trading rubber and position. The final two laps saw the group exchanging position but Jak Crawford emerged with second, only two-tenths of a second ahead of Luca Mars and Jeremy Fairbairn. Unfortunately for Fairbairn he received a two-position penalty for contact, moving Arias Deukmedjian up to fourth and Joey Brienza fifth.

Billy Cleavelin is two-for-two in US Open competition this year after taking home the checkers in a rather uneventful Max Masters Final. Cleavelin and pole-sitter Jeremie Charon exchanged the lead in the first three laps until Charon came under pressure from Mike Rolison for second. That allowed Cleavelin to break free, completing the 20-lap final just under five seconds ahead of Charon at the line. Derek Wang completed the podium, moving by Scott Roberts in the late stages of the race.

It wasn’t an ideal start for the two drivers lining up on the front row for the Shifter Senior Final, but polesitter Kyle Kirkwood managed to arrive at the first corner still in the lead. Nick Neri however, fell back to fourth. While Kirkwood pulled away from Tyler Bennett, Sabre Cook and Neri, this trio squabbled over second. It took a while, but Cook finally made a move stick against Bennett, earning her the second step on the podium with Neri also taking advantage of a fading Bennett to finish third.

Racing within the Shifter Seniors, Ryan Kinnear held off Chris Jennings for all 20 laps to take the win with both drivers gasping for air at their podium celebration. Ryan Pool was third.