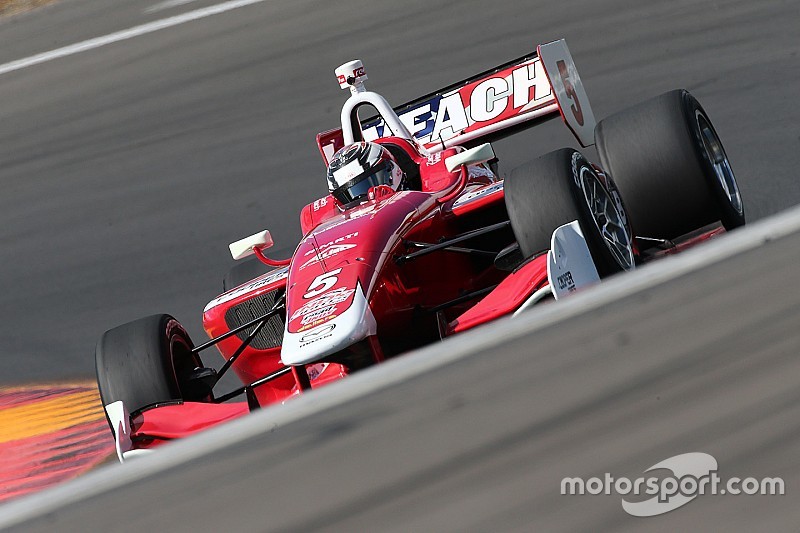 Zach Veach scored a brilliant second victory of the season, taking the lead after a brilliant start and then proving faster and also kinder on tires than any of his rivals, as the championship contenders faltered.

At the drop of the green flag , polesitter Santiago Urrutia sent his Schmidt Peterson Motorsports car straight into the lead, while Ed Jones (Carlin) from third on the grid Veach from fifth skipped around front-row starter Andre Negrao to fill third and second spots.

Veach exited Turn 1 tucked in Urrutia’s slipstream and up the hill and along to the Bus Stop, the Belardi car drafted past to grab the lead. By the end of Lap 1, Veach had a 0.8sec margin back to the championship leader.

Jones, Negrao and Juncos Racing’s Kyle Kaiser completed the top five, while Carlin’s second car, that of Felix Serralles, limped to the pits with a left-rear puncture, having been sliced by Zachary Claman De Melo’s right-front wing as they climbed the hill away from Turn 1.

On Lap 4, Urrutia tried to close in on the leader, but the following lap he lost a full second.

A driver struggling even more was Dean Stoneman, who by Lap 6 was 4.5sec behind Kaiser’s fifth-place Juncos Racing machine. Mind you, he was doing better than his teammates who collided at the Bus Stop on Lap 6, as Dalton Kellett pointlessly tried to sit it out with Shelby Blackstock into the chicane and broke his front wing on the rear wheel of the #51 car.

By Lap 7, Urrutia was clearly not going to be a threat to Veach and was instead struggling to stay ahead of Jones, who in turn had his mirrors full of the second SPM car of Negrao. Jones made his first serious stab at passing Urrutia for second on the 11th lap as they entered the Bus Stop, but Urrutia blocked hard – not deemed worthy of a penalty. The more the Uruguayan went defensive inevitably, the further he fell away from the lead, the gap 7.7sec by Lap 14.

Lap 15 saw Jones slip past Urrutia for second, and the following lap, Urrutia desperately locked his front tires trying to hold off teammate Negrao into the Bus Stop. It didn’t work, however, and the Brazilian grabbed third place. Not only that, Urrutia lost enough momentum that Kaiser was able to zap him easily into Turn 8.

It was now Stoneman’s chance to close in on Urrutia, but the Andretti Autosport driver didn’t need to make the pass, as Urrutia’s front-left appeared to delaminate as he went through Turn 2, causing the #55 car to clout the curb and the barrier. Urrutia limped the car back to the pits for a new tire and front wing. Meanwhile, Stoneman’s hold on fifth place was shortlived, as he too was desperately struggling to protect his tires. He was passed by both the third Carlin car of Neil Alberico – looking more convincing than he has done all season – and AA teammate Blackstock.

That prompted the Andretti team to call Stoneman in for fresh rubber, but not before the recovering Serralles passed him for seventh at Turn 9. By the time the #27 AA car emerged from the pits, he was just a few car lengths ahead of dominant leader Veach, and would cross the line only 10th.

That was still two spots ahead of Urrutia, who saw his championship lead whittled to one by race runner-up Ed Jones, who crossed the line four seconds behind the brilliant Veach.

Negrao finished in Jones’ wheeltracks for his fifth podium in seven races, with Kaiser, Alberico and Blackstock completing the top six.