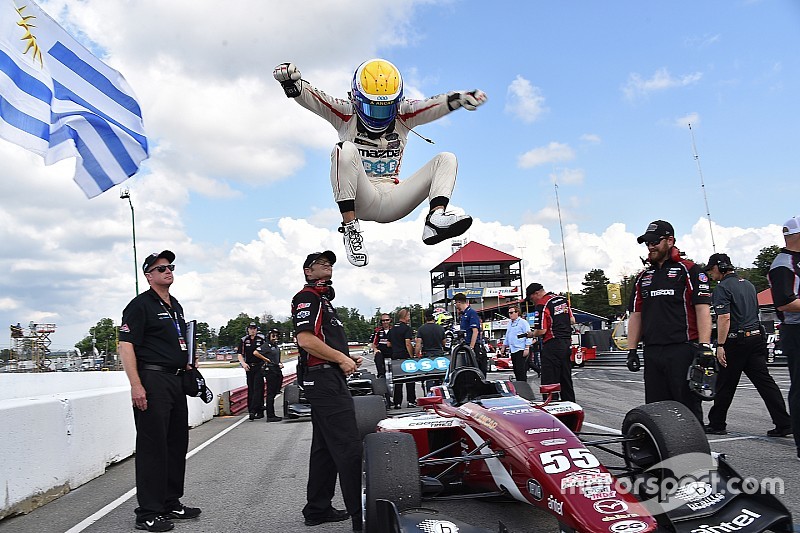 Santiago Urrutia didn’t need to destroy the opposition as he did in yesterday’s race, instead keeping just out of reach of his Indy Lights rivals to claim his fourth win.

From pole position, the Schmidt Peterson Motorsports driver jumped straight into the lead pursued by Carlin Racing’s Felix Serralles. Behind them, Dean Stoneman grabbed third from Urrutia’s teammate, Andre Negrao, who then retook the spot at Turn 4, only to find Stoneman hanging on around the outside of Turn 6 to get back into third.

Behind them, Belardi Auto Racing’s Zach Veach had moved past Andretti’s second car of Shelby Blackstock to take fifth and move onto the tail of championship leader Ed Jones of Carlin. The following lap, Veach was through and hassling Negrao, this pair also drawing onto the tail of Stoneman.

Blackstock, who had also lost a place to Team Pelfrey’s Garrett Grist on the opening lap moved back past at Turn 4 on lap 5, and was followed through by Juncos Racing’s Kyle Kaiser. Six laps later, Grist threw his car off the track at Turn 4, but more dramatically still, Serralles spun away his second place, while still little more than a second behind Urrutia.

That brought out the full course yellows, but the lap 14 restart was waved off as some attempted to make an early break. The following lap, Race Control felt all was in order, and let the field go, with Urrutia comfortably holding off Stoneman, Negrao and Veach.

A lap later, a recovering and chastened Serralles moved past Dalton Kellett (in the third Andretti car) to take eighth and moved onto the tail of Kaiser. On lap 19, the Carlin car went around the outside of the Juncos car, while just ahead, Blackstock emulated the move on Jones.

That left the two Carlin cars running together, and Serralles passed Jones but needed to pit for a new front wing at the end of lap 21, when the yellows flew once more as teammate Jones was buried in the tire wall at Turn 2. That field bunching did at least allow Serralles back onto the tail of the field by the time the green waved again on lap 26.

Again, Urrutia had no problem pulling out a 1sec lead on Stoneman, with Negrao and Veach not quite close enough to each other or Stoneman to make a pass. Kaiser caught Blackstock napping to grab fifth on lap 27 but six laps later Blackstock stuck it out around the outside of Kaiser at Turn 4 to earn his top-five spot.

Meanwhile Serralles had been charging again, passing the third Carlin car of Neil Alberico and then the second Juncos machine of Zachary Claman De Melo which had never shown much pace after a lap 1/Turn 1 off-road excursion.

Serralles’ charge was halted when he half-passed Kellett at Turn 2, only to have the Andretti car then nudge him off the track at the exit of the turn. Both cars resumed, but Serralles pitted again and stopped.

And so at the checkered flag, Urrutia had his fourth victory of the season, 1.5sec ahead of Stoneman who had Negrao just 0.3sec in arrears, with Veach fourth, Blackstock fifth and Kaiser sixth.

The result moves Urrutia into the lead of the championship by 16 points ahead of Jones, 26 ahead of Stoneman.

Urrutia blows the opposition away at Mid-Ohio

Rosenqvist ends Indy Lights campaign, retained for next DTM round