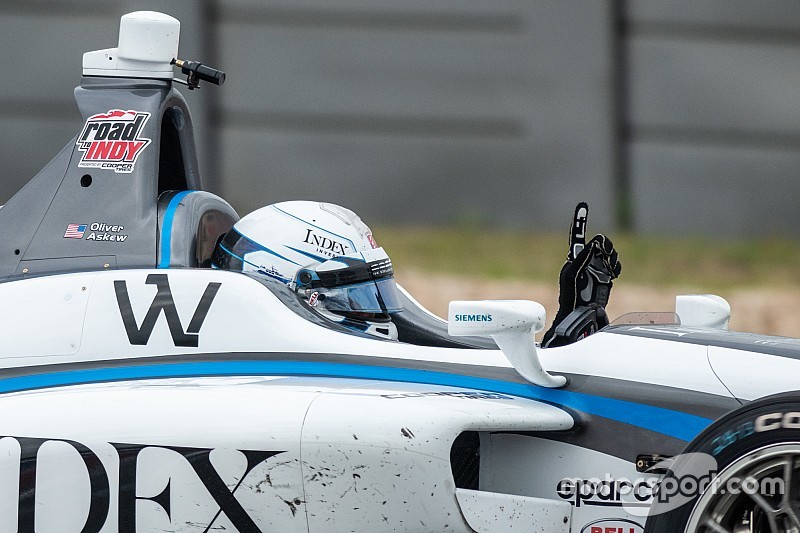 Oliver Askew earned second place in the first Indy Lights race of the weekend, then took advantage of a clash between rivals on Sunday to swoop and score his fourth win of the season.

Belardi Auto Racing’s Aaron Telitz scored his first Indy Lights win in more than 18 months when he dominated Saturday’s race at Honda Indy Toronto. Telitz, who won both Pro Mazda (now Indy Pro 2000) races at Toronto in 2016, started from pole, immediately laid down a couple of fast laps to take him out of push-to-pass range of his pursuers, and simply controlled the race from there on. He is the sixth different Indy Lights winner this season.

Those pursuers were led by championship leader Oliver Askew of Andretti Autosport, who jumped ahead of front-row starter and prime title rival Rinus VeeKay. The Juncos Racing driver initially applied some pressure on Askew but then fell away, only closing up in the final laps as Askew eased off, unable to close on Telitz. Askew thus extended his championship lead over VeeKay to six points with eight races still to run.

Another Andretti driver, Ryan Norman ran fourth the whole race, without the pace to seriously threaten for a podium spot but also staying clear of BN Racing/Team Pelfrey’s Toby Sowery who suffered an electrical problem on the final lap but held on to finish fifth.

Askew’s fortunes and championship lead blossomed the next day. Starting from pole, he fell to third at Turn 1 as Telitz and then VeeKay came barreling past, and he saw Telitz pull away initially, but VeeKay hunted down the leader and when Telitz ran wide in Turn 8 on Lap 24, he suddenly had his mirrors full of Juncos #21. Down to Turn 3 on the next lap, VeeKay pulled alongside Telitz and tried to outbrake him. Instead he outbraked himself and tried to lose speed by cutting across to the apex and sliding out wide. Instead he gripped and ran over the nose of the Belardi car, both cars slithering into the tires. Askew, running two seconds behind, nipped through to claim the lead.

Telitz recovered to claim sixth, but VeeKay lost four laps as repairs were carried out.

Meanwhile, Askew won by almost seven seconds over Sowery to extend his points lead to 25, while Dalton Kellett in the other Juncos car claimed third ahead of former teammate Norman, who fell to last on the opening lap but charged back.

In Race 1, Danial Frost scored his and Exclusive Autosport’s second win of the season, beating points leader Rasmus Lindh (Juncos Racing) by less than half a second after starting third.

RP Motorsport’s Kyle Kirkwood, the reigning USF2000 champion who scored his first two Indy Pro 2000 wins in the Road America double-header, earned his first Indy Pro pole, but allowed Frost down the inside at Turn 1 on the opening lap. Running wide on the exit also allowed Lindh through to second.

Kirkwood’s problems weren’t over: when feisty teammate Ian Rodriguez tried to outbrake him on the inside of Turn 5, the pair made contact, and Kirkwood limped to the pits for a new nosecone, while Rodriguez lost third to Sting Ray Robb in another Juncos car.

Moises de la Vara hit the wall at Turn 11, bringing out the first full-course caution, during which period Rodriguez was ordered to the tail of the line as penalty for his bump with Kirkwood.

Frost maintained the lead on the restart, aided by Lindh and Robb tussling over second place – a fight eventually settled by Robb striking the wall at Turn 6. That allowed Antonio Serravalle into third but he was outbraked by Parker Thompson of Abel Motorsport at Turn 3, the Canadian retaining the last podium position to the checkered flag.

Lindh got a second stab at Frost when Charles Finelli caused a yellow with a shunt at Turn 8, but Frost hung tough and won by 0.45sec, with Thompson a further 1.3sec down but equidistant ahead of Serravalle. Rodriguez salvaged fifth to beat Jacob Abel, while Kirkwood was a disappointed eighth, one lap down.

However, he turned that around with a dominant performance on Sunday, leading from pole position to checkered flag. He was chased hard all the way by Thompson, Lindh, Robb and Frost, who had survived an opening-lap clash with Serravalle which saw the latter hit the wall.

Thompson’s necessary defense of second from Lindh on the final lap meant he slipped to 1.7sec behind the winner – as big as the margin had ever been all race. On Lap 21 of the 30, Frost got around Robb for fourth, while Rodriguez came home sixth.

Cape Motorsports’ Darren Keane launched himself into the 2019 championship hunt with the first win of his USF2000 career, defeating polesitter Christian Rasmussen of Jay Howard Driver Development after passing him for the lead and fending him off for the remainder of the race.

Keane hung tough with Rasmussen in the early stages, and under braking for Turn 3 on Lap 11, he dived down the inside of the Dane at Turn 3, then set fastest lap and pulled away.

Hunter McElrea of Pabst Racing kept pace with the lead pair and battled hard with Rasmussen for second place, but when Newman Wachs Racing’s Cameron Shields struck the wall at Turn 8, McElrea settled for third ahead of points leader Braden Eves in a second Cape car.

The top two’s order was flipped on Sunday, as Rasmussen beat Keane by just 0.1147sec to claim his first USF2000 victory after a late yellow. At the start, Rasmussen sliced inside polesitter Keane at Turn 1, while Colin Kaminsky’s Pabst Racing car moved into second at Turn 3, and Christian Bogle slid from 10th up to fourth! Behind ran Eduardo Barrichello (Miller Vinatieri Motorsports) and Eves.

However, caution periods for a Barrichello spin at Turn 3 on Lap 8 and his MVM teammate Jack William Miller striking the wall at Turn 5 on Lap 11, kept the field close. At the first restart Rasmussen held his advantage over Kaminsky, but following the second restart, Keane got back around Kaminsky and into second.

Eves then tried to pass Kaminsky into Turn 1 but the pair made contact which brought out the third and final caution with two laps to go, and sent them both to the pits for repairs. That final restart saw Rasmussen barely hold off Keane, while Matt Round-Garrido (BN Racing) moved up to claim third just ahead of DEForce’s Manuel Sulaiman and Jak Crawford.