Serralles takes second win of the year at Iowa 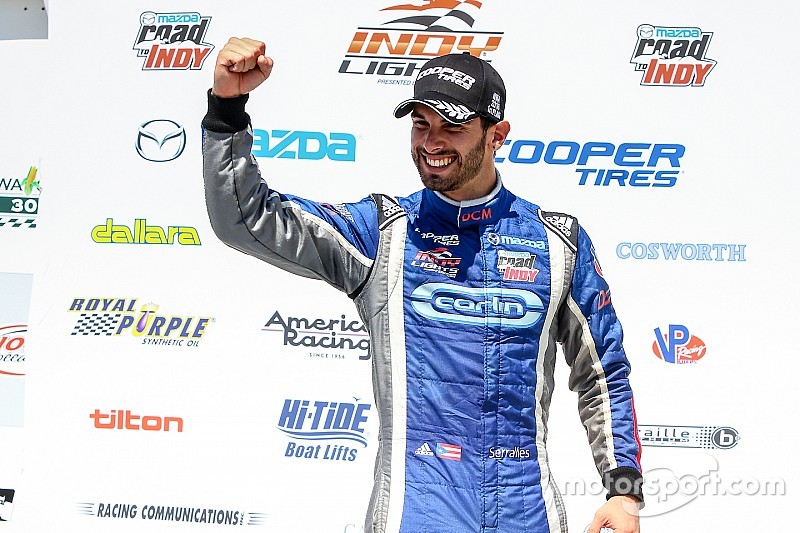 Carlin Racing’s Felix Serralles bided his time and cared for his tires in the first third of the Indy Lights Iowa Challenge to charge through to victory at Iowa Speedway.

With the grid lined up according to points after qualifying was rained out, Serralles started only fifth on the grid but immediately passed fourth-placed starter Kyle Kaiser of Juncos Racing, and then Santiago Urrutia in the Schmidt Peterson Motorsports car which bogged down on the opening lap and fell to fifth.

Meanwhile the polesitting Carlin car of championship leader Ed Jones led the first 56 laps of the race, with Andretti Autosport’s Dean Stoneman in second, trying to hold off Serralles.

Finally Serralles passed Stoneman on lap 26 and swiftly zoomed up onto the tail of Jones, and it seemed only a matter of time before the blue cars exchanged places. However, the man to watch was Zach Veach whose Belardi Auto Racing entry had survived a three-wide moment on the opening lap and then passed Urrutia on the third lap.

Veach then spent 10 laps trying to pass Stoneman, much to his chagrin, and admitted afterward his technique involved “hand gestures from the cockpit.” On lap 49, Veach was through and hunting down the Carlin pair.

Seven laps later, there was a change of leader up front, as Serralles closed the gap and passed Jones as they lapped the third Carlin car of Neil Alberico. Yet Veach kept gaining and passed Jones, then Serralles on lap 80.

However, Serralles, who hadn’t won an Indy Lights race since the season-opener at St. Petersburg, was in no mood to quit. As the leader got held up by Alberico as they lapped him for the second time, blue passed red on the penultimate lap and held on to take victory by 0.6681sec.

Jones, satisfied that he had increased his championship lead, came home 7sec adrift in third, having struggled with his car’s handling in traffic. Stoneman, in a clearly slower car, could be satisfied with the damage limitation of a fourth-place finish a further three seconds back, with one of his bête-noirs Urrutia in fifth.

Kaiser was a lapped sixth on a day when there were no caution periods and allowed Serralles to win at an average speed of 154.396sec, with Team Pelfrey’s Juan Peidrahita in seventh after a strong opening three laps saw him make up three places.