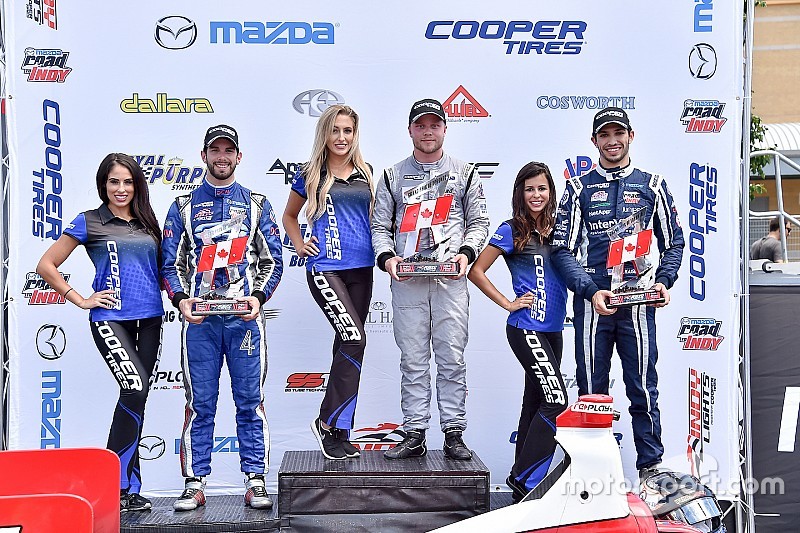 Felix Rosenqvist sent Belardi Auto Racing back to Victory Lane with a superb Indy Lights win at Toronto, his second win of the year, holding off Felix Serralles to the checkered flag.

The Swede, who last won in March at St. Petersburg, led from pole and left Carlin’s Serralles to try and fend off Schmidt Peterson Motorsport’s Santiago Urrutia at Turn 1, something he failed to do. In fact, both Urrutia and Serralles were so busy battling, they were passed around the outside by the second Belardi car of Zach Veach.

Stalemate reigned until on Lap 8, Serralles repassed Urrutia for third, but the real drama occurred on lap 10, when Piedrahita outbraked himself at Turn 3 while trying to pass Stoneman, tore off his left-front wheel on the Andretti car’s right-rear, and skated steerlessly into the unwitting and entirely innocent Claman De Melo, eliminating both.

Remarkably, Stoneman’s car appeared to be without hurt, and at the restart following the inevitable full-course caution, he passed championship leader Jones into Turn 1. But the third Carlin car of Neil Alberico hit the wall, forcing a further yellow period.

On the next restart Serralles had his eyes set on Veach who he passed for second at Turn 3, and although he also homed in on Rosenqvist, he had already used up his push-to-pass boosts and could only watch as his namesake pulled away to win by almost eight seconds.

Veach remained third almost to the checkered flag on lap 35 but came under increasing pressure from Kaiser who’d demoted Urrutia as long ago as Lap 22.

Finally, Veach cracked, leaving “just an inch of room” at Turn 3 according to Kaiser, who thus claimed the final step on the podium… but the drama wasn’t over as Veach crashed further around the lap, allowing top championship challengers Urrutia, Stoneman and Jones to complete the top six.