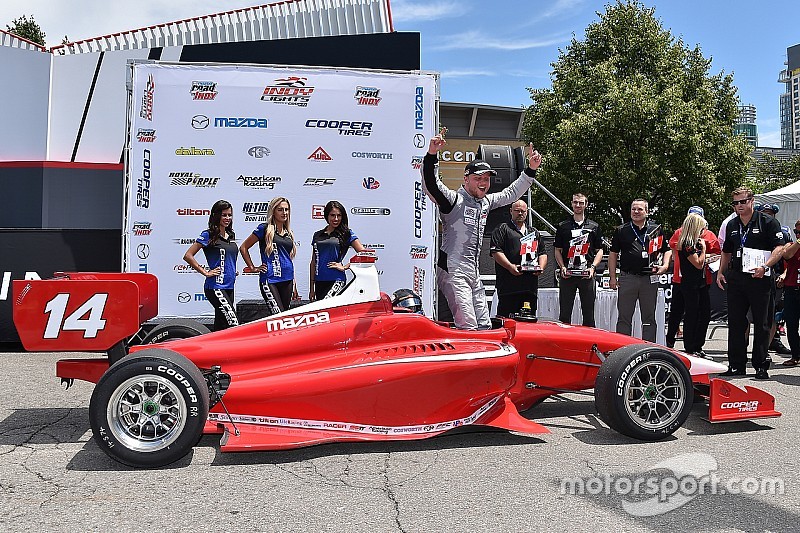 The Swede was never headed from pole and stroked out to an 8.5 second lead by Lap 37, but then eased back to cross the line 7.3sec ahead of runner-up Andre Negrao of Schmidt Peterson Motorsports.

Negrao started the race alongside polesitter Rosenqvist, both positions set by their fastest lap in yesterday’s Race 1. Rather than try and keep up with the Swede, who was simply in a class of his own this weekend, Negrao was instead forced to keep an eye on his mirrors for the aggressive Kyle Kaiser of Juncos Racing and the super aggressive Santiago Urrutia in the second Schmidt Peterson car.

However, his task was made easier because Kaiser and Urrutia were so caught up in their own battle over third. And in the end it was Kaiser’s sharp defensive instinct that paid off, always hugging the inside line into Turn 3 whenever Urrutia got close. Aside from a brush with the wall as he came onto the pit straight, Kaiser looked entirely unruffled by Urrutia’s presence.

Perhaps Kaiser was aware already that Urrutia would consider today a good points day and therefore wouldn’t try anything too risky. The Uruguayan’s principal championship rivals were left behind, bruised or battered. Championship leader Ed Jones of Carlin Racing was fifth but 20sec adrift; his teammate Felix Serralles got knocked around after a poor start, and picked up a puncture which forced him from an escape road to pit road. He would later pick up a second puncture and come home 10th.

But they were all in better shape than Andretti Autosport’s Dean Stoneman who failed to even make the start after a “major engine issue” according to team owner Michael Andretti.