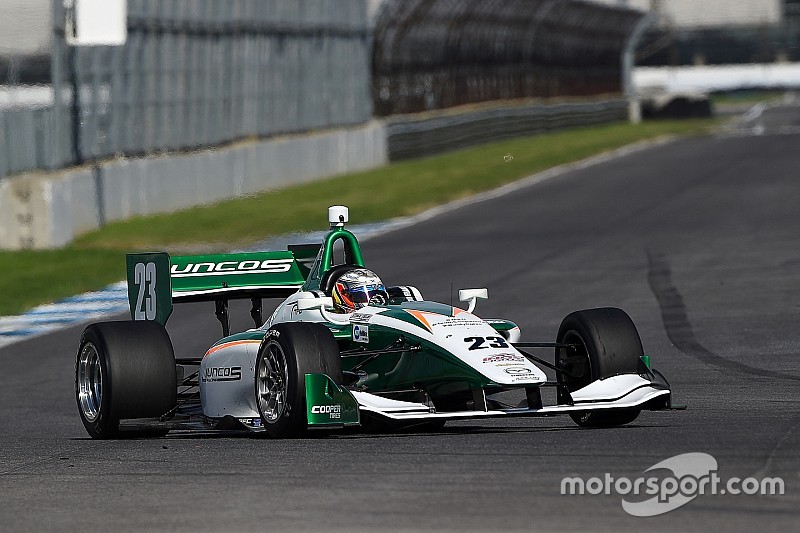 Parker Thompson, who finished third in the 2017 USF2000 points table and runner-up in Pro Mazda this year, both with Canadian team Exclusive Autosport, will pilot a Team Pelfrey Lights car.

Franzoni will switch across to a Belardi Auto Racing machine where he will team up with David Malukas who scored three PM wins with BN Racing this season past, and Lucas Kohl who finished third in USF2000.

Meanwhile Franzoni’s spot at Juncos has been taken by the team’s Pro Mazda champion, Rinus VeeKay.

Partnering Norman at Michael Andretti’s team will be 2017 USF2000 champion Oliver Askew and Robert Megennis, who finished fifth in Pro Mazda this year.

The prize for winning Indy Lights next year has been bumped up from $1m to $1.1m, guaranteeing entry into three IndyCar races in 2020, including the Indy 500.

In Pro Mazda, Juncos Racing has entered three cars, for Rasmus Lindh, who earned second place in the 2018 USF2000 championship, Danial Frost, who showed well in a handful of USF2000 races, and Cameron Shields, who has won races in Australia’s Formula 3, Formula 4 and Formula Ford.

Nikita Lastochkin will pilot the ex-Thompson Exclusive Autosport entry, while Mathias Soler-Obel will remain with the Italian RP Motorsport team along with Darren Keane. BN Racing, which announced recently it will expand its operations to all three levels of the ladder system in 2019, will run Julian Van der Watt and Kyle Dupell.

Road To Indy veteran Alexandre Baron will test for the new USF2000 team Legacy Autosport, after scoring two wins in the category last year, and he’ll be joined by Andre Castro.

Pabst Racing, which has won the Team Championship in each of the past two years, also will field three cars for 15-year-old Yuven Sundaramoorthy, Hunter McElrea, who leads the Australian Formula Ford Championship with two rounds remaining, and Logan Cusson.