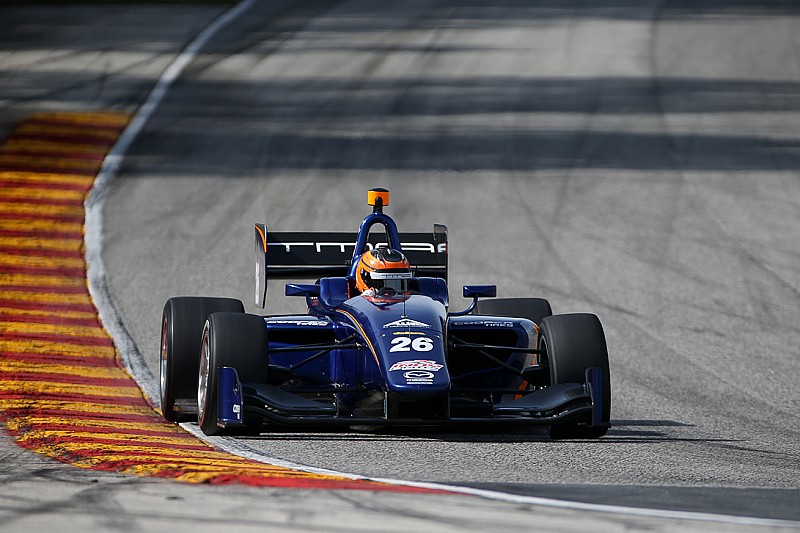 Carlin Racing’s Matheus Leist led from start to finish to rack up his second consecutive Indy Lights victory at Road America and move to second in the championship.

At the start of the race, Leist made a strong getaway but Carlin teammate Neil Alberico lost out massively at Turn 1, losing momentum and running wide, dropping down to ninth.

Ryan Norman’s Andretti Autosport car took the outside line to Turn 1 and tucked in behind Leist to grab second, but championship leader Kyle Kaiser of Juncos Racing drafted past Norman at the start of Lap 2.

The real danger man was Belardi Auto Racing’s Santiago Urrutia, though, up from 10th on the grid. On Lap 2, as Kaiser was still trying to defend from Norman under hard braking for Turn 5, Urrutia went three-wide down the inside and moved from fourth to second in one slick maneuver.

Kaiser drafted back past Urrutia on the front straight next time by, but into Turn 3 Urrutia reclaimed the spot, and Kaiser lost enough momentum on the outside to allow Norman to reclaim third.

At the start of Lap 6, Leist had extended his lead over Urrutia to 3.3sec, as Kaiser got back around Norman to grab the final podium place. Further round the lap, Norman ran wide and onto the grass, allowing teammates Nico Jamin and Dalton Kellett into fourth and fifth.

Behind this convoy of three Andretti cars ran Team Pelfrey’s Juan Piedrahita and the man struggling to recover, Alberico, who had damage to his front wing. At the tail end of the field was Race 2 polesitter Colton Herta, who could not escape the clutches of the other two Carlin cars, those of Zachary Claman De Melo and Garth Rickards.

By Lap 9, Kaiser had pulled three seconds on the Andretti cars and was threatening Urrutia’s second place once more, while a lap later Norman got past one of his teammates, Kellett, to grab fifth. Piedrahita would further demote Kellett on the very next lap, and Alberico would grab seventh from him on Lap 12.

At the start of Lap 16, Norman drafted past Jamin on the front straight, and Jamin’s attempt at retaliation in Turn 5 saw him wander wide, and allow Piedrahita up into fifth.

Herta spun on the last lap but was classified 12th, while Nicolas Dapero pitted his Juncos car a lap from the end.