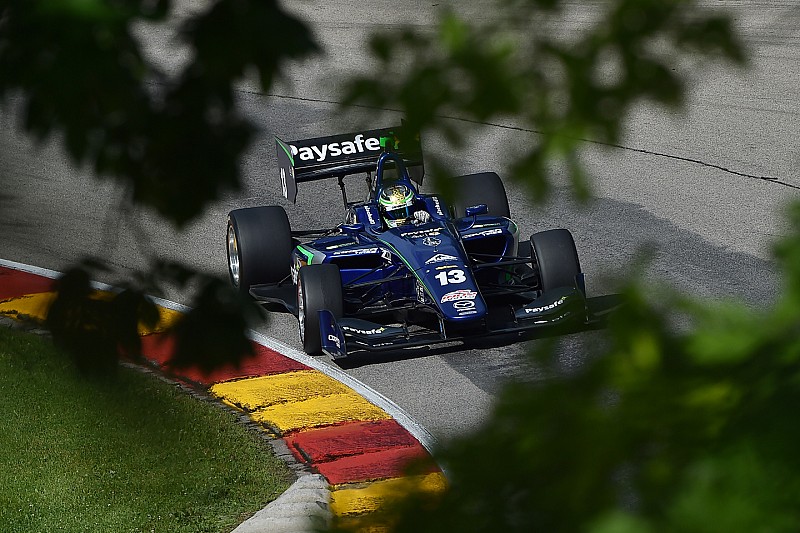 Carlin Racing's Zachary Claman De Melo was in a class of his own in Indy Lights' second race of the weekend at Road America, and drove to a 10sec victory over Juncos Racing's Kyle Kaiser.

Kaiser then had to repass the charging Belardi Auto Racing driver Santiago Urrutia, too, who outbraked the Juncos car but also himself into Turn 5.

Leist fell to fifth, behind Carlin teammate Claman De Melo, who the following lap passed both Urrutia and Kaiser and at the start of Lap 3 attempted to pass Herta for the lead. However, the Canadian was on the outside of Turn 5, so the Andretti driver held on to P1, but the second-gen driver was locking tires as he attempted to stay clear of the charging Carlin car.

Urrutia lost fourth to Leist at Turn 5 on Lap 4, and at the start of the following lap, Claman De Melo claimed the lead from Herta around the outside of Turn 1 and immediately started stretching a gap, leaving Herta to fend off Kaiser.

Herta then charged back to challenge Claman De Melo on Lap 6 at Turn 5 but couldn’t make the move stick. The significant order change that lap came when local boy Aaron Telitz took his Belardi car past Carlin’s Neil Alberico and started closing on teammate Urrutia.

Herta, having fallen three seconds behind Claman De Melo, was passed around the outside of Turn 5 by Kaiser on Lap 10 and came under intense pressure from Leist. Four seconds back, Telitz passed Urrutia for fifth.

Claman De Melo had an eight second lead by the 13th of the scheduled 20 laps, partly as a result of Herta fighting back at Kaiser, repeatedly trying to pass around the outside of Turn 5, and Kaiser having to compromise his entry into every passing zone.

Leist was sitting right behind, waiting to benefit from any potential fallout, and on Lap 15, he was forcing Herta to get defensive on the run to Turn 5.

Their battle was also bringing Telitz into play, as he had been charging ever since passing Urrutia, dropping him by 3sec. Urrutia was having to work hard to hold off Alberico, Andretti’s Ryan Norman who had started last following mechanical difficulties in qualifying, and the third Belardi car of Shelby Blackstock.

Norman passed Alberico into Turn 1 on Lap 18, and Blackstock passed the Carlin car into Turn 5.

In the closing stages, Leist’s challenge to Herta ended, the Carlin machine falling to 3.5sec behind, and all eyes turned to the battle for sixth.

Norman, having been repelled by Urrutia at Turn 6, lost momentum and was passed around the outside by Blackstock, who gained another spot when Urrutia’s left-rear exploded as he went through the Kink.

The #5 thus limped home 11th, promoting Alberico, Andretti Autosport’s Dalton Kellett and Juan Piedrahita of Team Pelfrey, who was spun by Alberico in the closing stages.