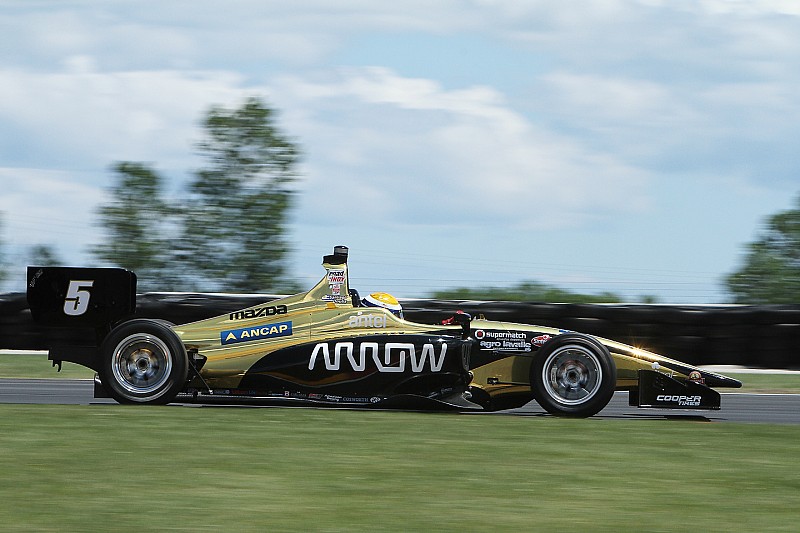 Polesitter Santi Urrutia of Belardi Auto Racing claimed the lead at the start and despite almost constant pressure from Colton Herta’s Andretti Steinbrenner Racing entry, held on to clinch his first win of the season.

The Uruguayan, who dominated both Lights races here last year, took the lead on the third attempt at a start and Nico Jamin was past Andretti teammate Herta by the time they exited Turn 2. Herta was soon trying to make amends and passed his teammate for second on Lap 7 but was by then over 2sec behind the leader.

Behind them, the second Belardi car of Shelby Blackstock was holding down fourth, ahead of Carlin pair Zachary Claman De Melo and Neil Alberico.

Herta pared the gap to the leader down to 1.3sec after a couple of laps in second place, but once it dropped to 0.8sec, he could get no further. A passing opportunity was going to depend on Urrutia making a mistake or having greater tire degradation.

Behind the lead pair at two-third race distance, Jamin was 1.8sec adrift and under increasing pressure from Blackstock and de Melo, but into the last five laps, this trio were catching up to Urrutia and Herta once more.

However, the order remained the same and thanks to a disastrous day for Carlin’s Matheus Leist – he finished only 11th – Herta’s runner-up finish was enough to move him up into second on the points table.

The other driver to have an awful day was championship leader Kyle Kaiser, whose Juncos Racing #18 limped home 12th. That was two places better than his teammate Nicolas Dapero, who was the race’s only DNF.