Juncos optimistic about contending for two championships in 2016 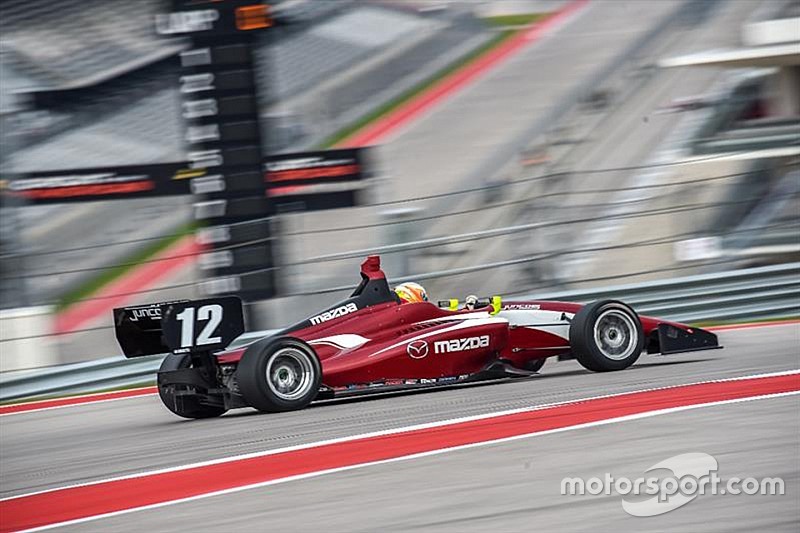 Ricardo Juncos, whose team ran Spencer Pigot to the Indy Lights presented by Cooper Tires title in 2015, believes the team is capable of emulating this achievement and taking the Pro Mazda championship in the same season.

Although Pigot will be graduating to IndyCar with Rahal Letterman Lanigan Racing in 2016, his teammate this year, fellow American Kyle Kaiser, has been confirmed at Juncos for a second season, and the team owner says he is optimistic that Kaiser can step up his performance.

“I think testing has gone really good,” said Juncos. “Kyle only ended up doing one day at Circuit of The Americas [in the Chris Griffis Memorial Test] but he ended that day fastest. Then last week we tested along with Carlin at Sonoma Raceway, and again Kyle was quick.”

Which and how many drivers will partner Kaiser is unclear for now, but Juncos has been impressed with both Zachary Claman DeMelo – a Canadian karting sensation who dabbled in Formula Renault 2.0 in Europe last season – and Jose Gutierrez, who raced for Juncos in Pro Mazda last season.

“There are still some technical areas Jose needs to work on, but I was impressed for someone so young [the Mexican is 19]. I think he also proved that Pro Mazda is a good development series for drivers coming into Indy Lights.”

Despite just seven Lights cars testing at COTA – Carlin was notable by its absence – Juncos says he’s not worried over grid numbers in the series’ second year using the Dallara IL15-AER Mazda.

“The series is expensive, yes,” said Juncos, “but I think what happened at COTA is that teams chose not to do the test. For one thing, it’s not a track we race at so what you learn there is not so important, and secondly, it’s not a particularly demanding track for drivers in cars with this horsepower level. So I assume a few teams decided not to go; I don’t think that test was representative when we’re talking grid size.

“Remember, we’re just in December, and a lot hasn’t been finalized. I mean, back before the final round this year [September], we thought for sure we’d have four cars in 2016, and at the moment I only have one confirmed. It’s not that easy.”

Juncos says the current restrictions regarding testing aren’t helping his decisions over drivers, as he’s not enthusiastic about racing with untried drivers. He commented: “We’ll continue testing next week at Palm Beach International Raceway,” but there’s a test blackout on December 21st, and unfortunately there are people we want to test but can’t yet. We still wait for a rules amendment there.”

Regarding whether a Juncos driver can follow in Pigot’s wheeltracks and win the Indy Lights title again, Juncos said: “You never know, but I am quite confident we can fight for it. That is the most you can say because it’s too hard to predict how it will end.

“Remember, last year we’d all started testing with the new car, so we just kept our heads down working, didn’t really think about what to expect… And then Spencer ended up winning the championship for us. But it was a hard, close battle, and we expect it to be just as difficult in 2016.

“You think of Jack Harvey the last two years and Esteban Guerrieri a few years earlier – they were very, very strong, but they didn’t win it. So this shows the competition level is so high.”

In Pro Mazda presented by Cooper Tires, Juncos Racing has a Teams title to defend and has so far confirmed three drivers – 2014 Asia Cup champion Jake Parsons, series returnee Will Owen and Juncos protégé Nicolas Dapero, who has been racing in Formula 3 Brasil in 2015. The first of these is someone for whom Juncos holds high hopes for 2016, despite his rookie status.

He said: “I think Jake can be a contender for the championship, I really do. He’s adapting well to the technique required by these cars, he seems very mature for his age, and also really fast. He’s matching his teammate Will [Owen] so that makes me feel good about him being a championship contender.

“At COTA, we were focusing purely on him learning the car, learning the team, and so we weren’t really going for flat-out times. Plus I think our engines are quite tired, being the end of season, and we’d changed the structure of the team, too. So his speed there was impressive.”

Juncos Racing has won the Pro Mazda title twice – 2010 with Conor Daly and 2014 with Spencer Pigot – but has had a driver in contention for the crown every year but one since joining in 2009. Juncos said he felt Dapero has the potential to join those ranks, given more experience.

“Nicolas has been doing a good job,” he commented. “We have been with him since go-karts, and he’s very passionate, very intense, so this can make him impatient to become really good, but that’s natural. Every time we put on new tires, he wants to go out and beat the track record! But we will keep working with his mindset, and he will get better and better.

“You know, the idea of having Nicolas with us for multiple years, and having his people have a long term plan, is to remove that desperation that some young drivers get. If his future is secure, he can just focus on improving technique, looking after his fitness, and so on.”

In terms of what championship opposition he expects from rival teams/drivers, Juncos cited reigning USF2000 champion Nico Jamin, who is likely to graduate in Cape Motorsports with Wayne Taylor Racing, for whom he won the title, and Pato O’Ward, who has been testing with Team Pelfrey. However, Juncos observed: “That’s not all. There are still more drivers to be announced, so already we know it won’t be easy.”