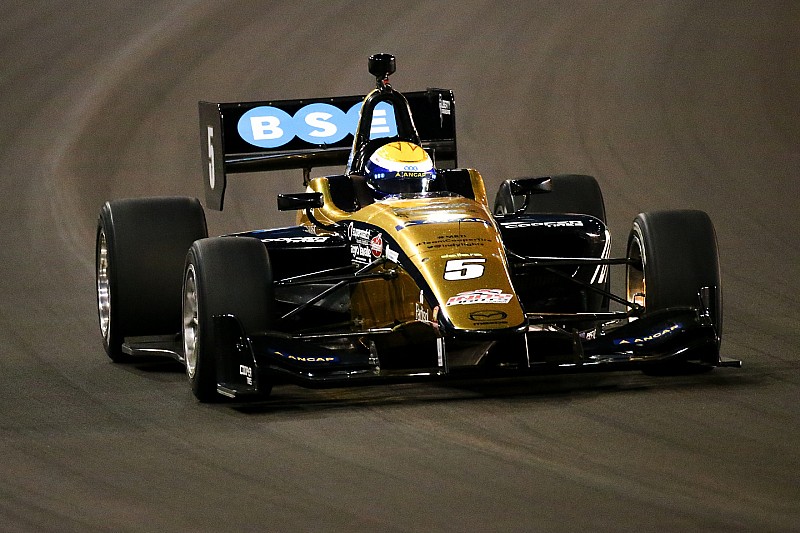 Santi Urrutia sent Belardi Auto Racing to Victory Lane for the second time in three races, but the bigger winner was Kyle Kaiser whose fourth place virtually assures him of the 2017 Indy Lights championship.

Surprise polesitter Piedrahita jumped into the lead at the start ahead of Urrutia but it became irrelevant as two separate incidents brought out the yellow flag.

Carlin’s Neil Alberico, who started eighth, got sideways, half spun and went over the grass on the infield. Further back, the Belardi Auto Racing machine of Shelby Blackstock also got sideways and teammate Aaron Telitz slid sideways into him, damaging  his rear wing and suspension beyond immediate repair.

At the restart on Lap 6, Piedrahita again led, with Kaiser pressuring Urrutia behind but Carlin’s evening got more gloomy as Zachary Claman De Melo and Garth Rickards both half spun, bringing out the yellow again.

At the second restart, Kaiser got around Urrutia at Turn 2 to grab second as Colton Herta moved up to fifth behind Andretti Autosport teammate Nico Jamin, and ahead of the second Juncos car of Nicolas Dapero and Carlin’s Matheus Leist.

Urrutia repassed Kaiser for second at Turn 1 on Lap 15, as Piedrahita ran 0.7sec further ahead.

Leist took Dapero on Lap 26, passing him around the outside at Turn 4, and kept charging to pass Herta for fifth four laps later. Another Carlin driver making progress was Claman De Melo who passed Dapero for seventh on Lap 38.

Up front, Urrutia grabbed the lead down the inside of Piedrahita at Turn 1 on Lap 44, and swiftly pulled away, while the battle for fourth between Jamin and Leist took them onto the tail of Kaiser, but also allowed Herta to close up.

Jamin and Leist both demoted Kaiser on Lap 50, while a closely observing Herta was zapped for sixth by Claman De Melo. ZCDM then demoted Kaiser to sixth with 18 laps to go.

On lap 62 of the 75, Alberico failed to give series debutant Chad Boat enough room as he lapped him around the outside, clipped his rear wheel and put them both into the wall, taking Rickards with them. The debris field, and the closeness of the planned end of race, was enough to prompt officials to throw the red flag at the end of Lap 66.

The restart on Lap 70 saw Piedrahita get around the outside of Urrutia at Turn 1, as Jamin got loose and spun to a halt, bringing out the yellow once more. The restart would see Piedrahita in front of Urrutia, Leist, Herta, Kaiser, Claman De Melo, Dapero and Andretti’s Dalton Kellett.

Except just before the restart suddenly Leist dived into the pits with a flat left-rear tire.

Piedrahita got a strong restart with two to go, but Urrutia muscled alongside him at Turn 3, and although Piedrahita got by him again on the exit of four, the Pelfrey driver didn’t move over to close the door, allowing Urrutia back down the inside into Turn 1, and leaving Piedrahita losing momentum on the outside line.

The result means that Urrutia bumps Herta down to third in the championship standings, while leader Kaiser only needs to start the finale at Watkins Glen to clinch the championship.