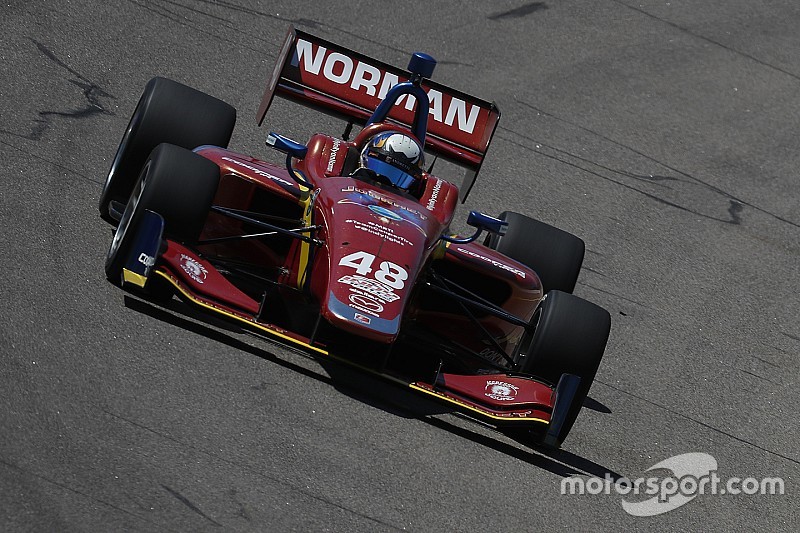 Ryan Norman scored his first Indy Lights victory after stalking polesitter and Andretti Autosport teammate Colton Herta and then battling his way past in the closing stages.

Polesitter Herta’s Andretti Steinbrenner Racing entry took the lead at the start, while Ryan Norman tucked in behind him, but Pato O’Ward temporarily fell behind the superfast-starting Santi Urrutia spring his Belardi Auto Racing from seventh into third.

After some brave stabs around the inside and outside, O’Ward regained his third place on Lap 9, and Urrutia drifted back a little to stave off teammate Aaron Telitz and Juncos Racing’s Victor Franzoni.

Once into third, O’Ward couldn’t make any impression on Norman who was staying within a second of leader Herta. By one-third distance, in fact Norman was putting his teammate under severe pressure, although whenever he drew within 0.3sec of Herta, he’d lose the front end and fall back to half a second behind.

On Lap 48, protecting his fourth place from Telitz by taking the inside line, Urrutia had a wiggle exiting Turn 2 and his teammate went down the the inside and displaced him. However, he couldn’t escape and the battle continued back and forth for the next seven laps, allowing Franzoni to gain on both of them.

In the final 10 laps, Norman redoubled his efforts to pass Herta and twice tried around the outside but Herta blocked (legitimately) on the straight and then moved out to take the racing line for the turns, discouraging Norman from flicking that way. But with six to go, Herta underestimated the run Norman had onto the back straight and was slow to cover the inside lane. The #48 filled the car-width gap and had the momentum to edge past.

Herta tried every which way to recover his lead, and three times the teammates were perilously close to touching wheels, but they had a firm grip on what was and wasn’t feasible, and Norman ran out the winner by 0.2055sec, the pair of them 14sec ahead of O’Ward.

The Belardi pair were a further 4sec down, and only a quarter second apart having pulled clear of Franzoni.

Herta is now 25 points behind O’Ward in the title race, with two rounds – at Portland next weekend – to go.

Mazda pulls out of Road to Indy program