Oliver Askew kept his head and showed great speed to pass early Indy Lights leader Rinus VeeKay and earn his seventh win of the season, while Kyle Kirkwood charged from the back of the Indy Pro 2000 field to dominate his race.

From pole position, Andretti Autosport’s Oliver Askew initially held off Rinus VeeKay’s Juncos machine by hugging the low line, but the Dutchman’s greater momentum on the outside allowed him to move in front and then steal his air through Turn 4. Behind, David Malukas of the newly named HMD Motorsports (formerly BN Racing) slotted into third ahead of Ryan Norman.

Robert Megennis had just moved his Andretti car past Dalton Kellett’s Juncos car for sixth, when it became fifth, as Toby Sowery spun the second HMD/Team Pelfrey and brought out the caution flag. He managed to restart without aid, and pitted for a four-tire change without losing a lap, now down in eighth.

The restart on Lap 16 was clean, although Kellett got back around Megennis for fifth. Finally, after several failed attempts, Megennis made a strong move down the inside of Kellett and made it stick on Lap 24 of they 75-lap race.

Up front, VeeKay was now coming under pressure from Askew, the pair of them 5sec ahead of the Malukas vs. Norman battle for third. VeeKay ran so high out of Turn 2 that he left a black mark on the wall, but continued to keep the Andretti car behind him. By mid-race, Malukas’ third place appeared secure having pulled over 2.5sec clear of Norman.

On Lap 53, Askew’s superior speed through Turns 3 and 4 paid off and VeeKay had to get defensive down the front straight. VeeKay held the inside line, but Askew braved it out around the outside, and although VeeKay remained on his inside for the next two turns, the Andretti Autosport driver was into the lead. Thereafter he pulled away and eventually won by 6.789sec, as VeeKay eased off and allowed Malukas to close within 1.1wsec. Norman was a further 10.7sec back but 3.2sec clear of his other teammate Megennis.

Askew’s seventh victory of the season has moved him 52 points clear of VeeKay with four races left (two at Portland next week, two at Laguna Seca in September). 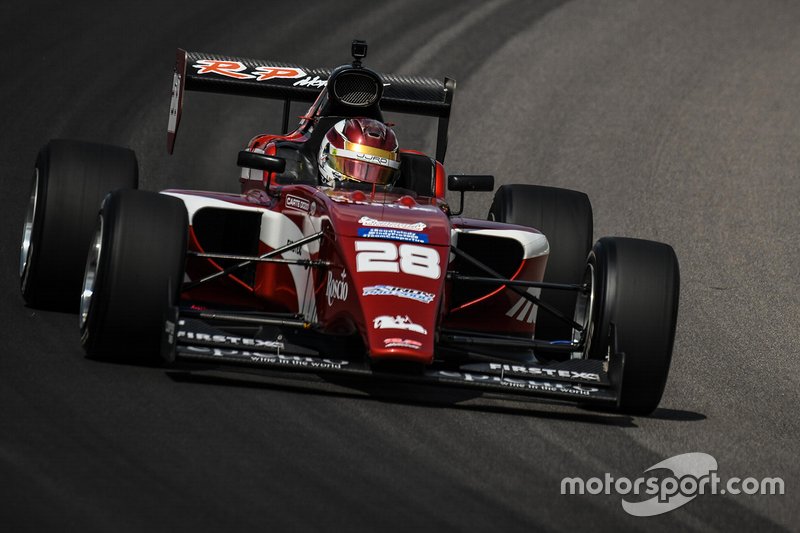 It took just four laps of the 1.25-mile World Wide Technology Raceway for RP Motorsport’s Kyle Kirkwood to lance his way through from last on the 12-car grid – – a penalty for a tech infringement in qualifying – to join the lead battle, dicing with the DE Force Racing pair of Moises de La Vara and Kory Enders and demoting Juncos Racing’s polesitter Rasmus Lindh to fourth. At the Lap 9 mark, Kirkwood had pulled a one-second gap over his pursuers.

De la Vara and Enders then joined battle with each other, running side by side at either end of the track and down the straights, allowing Kirkwood to escape up the road. Once Enders broke away from de la Vara, he started edging closer to Kirkwood, getting the gap down to 1.5sec by Lap 23 of the 55 lap race. De La Vara, meanwhile, had to keep his eyes on his mirrors for Lindh, Andtoine Comeau of Turn 3 Motorsport. Down in sixth ran Danial Frost of Exclusive Autosport, well ahead of Sting Ray Robb in the second Juncos car, Artem Petrov (RP Motorsport) and Parker Thompson (Abel Motorsports).

Frost moved past Comeau for fifth on Lap 27, while Enders kept creeping up on Kirkwood, cutting his lead to 0.7sec on Lap 30 before running wide at Turns 3 & 4 and losing half a second. The pair were now 10sec clear of De La Vara.

The Mexican came under renewed pressure from Lindh once the Swedish Juncos driver shook himself clear of Frost who had been running alongside him, and as Lindh went side by side with De La Vara on the outside of Turn 1, the DE Force car got out of shape and drifted high and into the Turn 2 wall.

The race was restarted at the end of Lap 48, Kirkwood’s was clean and sufficient, while Enders had to hold off some brave stabs from Lindh. Further back, Robb and Thompson got around Comeau for fifth and sixth.

Lindh kept the pressure on Enders, despite washing up the track whenever he got close in corners, but in the penultimate lap he started turning in from out wide and pinching down in the corners so as not to get disturbed by the wake of his prey. The plan worked and on the final lap he slingshotted off Turn 2 and as Enders moved to the inside down the back straight, Lindh drew level on the outside.

The Swede kept his head and kept his throttle down and drove around the outside of Enders through Turns 3 and 4 to claim second place at the line by 0.0922sec. It was a big move for Lindh, enabling him to maintain a six-point lead over Kirkwood who has nonetheless won six of the last seven races.