Zanardi gifted with Ganassi car from Laguna Seca race in 1996

Chip Ganassi handed Alex Zanardi the keys of the car he won the 1996 CART race in at Laguna Seca in, in an emotional ceremony at Indianapolis.

Indianapolis, Ind. – In a special ceremony at the Yard of Bricks at the Indianapolis Motor Speedway, Chip Ganassi presented Alex Zanardi with the Reynard 961/Honda that Zanardi drove to victory in the CART race at Mazda Raceway in Laguna Seca in September 1996. In that legendary race, Zanardi passed Bryan Herta in the famed “Corkscrew” turn on the last lap for the famous victory in the car.

Zanardi won CART championships for the Ganassi team in 1997 and 1998, but suffered severe injuries in a crash in Germany in 2001. The injuries resulted in the amputation of both legs above the knee. Zanardi resumed his racing career not long ago in touring cars and also won a gold medal in the hand cycling men’s road time trials in the Paralympic Games in London a year ago.

Said Ganassi in making the surprise presentation, “I’m happy to have Alex and his team as special guests of Target Chip Ganassi Racing. (Jimmy) Vasser and Alex were the foundation of Chip Ganassi Racing. Nothing that Alex has done has surprised anybody. There is no one like Alex – the mold was broken when he was born. We never had him in a race car at Indianapolis, but his pass at Laguna Seca will never be forgotten.”

In an emotional response, Zanardi said, “It is really difficult to put it into words. I’m lucky to have had a long career with many highlights, along with two championships we won with Target Chip Ganassi Racing, which were, for sure, amazing accomplishments. Laguna Seca was probably the most emotional win for me and the one that changed my life. If I had not tried that move, who knows what my race career would have been. The perception by many is that after that day, I was a different guy. I won a lot of fans that day and caused some controversy, but that is what keeps us alive, and I was definitely alive that day.”

Zanardi will have the bright red car shipped to Italy. The car was dubbed “Midnight,” as so many late-night hours had been poured into the car to prepare it for racing. 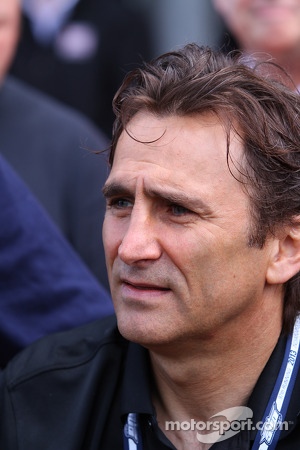 Thinking about whether he could compete at Indianapolis today, Zanardi said, “Technically speak, I would say yes to the possibility of racing at Indianapolis. A lot of good drivers would die for the opportunity to drive for a great team that Chip runs, but I want to state it clearly, Chip doesn’t need Alex Zanardi to have a competitive event. For me, I know it is possible but at my age, you don’t have the capability to keep the right focus throughout the season that you have in your 20s. You have other things to think about.

“Why I have been successful in cycling is not because it is easy, but because I have the time. Racing at Indianapolis would not be easy to organize, but I believe I am very passionate for the sport and have the capacity to steer the wheel. If the right opportunity would arise, I would have to be curious about it and look at it. Indianapolis was not my dream from childhood because my dream was to race a red car (Ferrari) in Imola and pass Jody Scheckter, who was hero as a boy, in the last corner of the last lap.”

The glib Zanardi went on to say he had his day in the sun in a red car but it was a Ganassi car not a F1 car. “Chip changed my life and is a close friend of mine, a friendship that will last forever.”

Zanardi basked in the spotlight throughout the day and gauging by the hordes of fans and media that gathered around him, he’s as popular today as he was years ago.

The Indianapolis 500: iconic is more than a word