Baltimore, MD – In what turned out to be a wild – and sometimes wet – Grand Prix of Baltimore, National Guard Panther Racing driver JR Hildebrand finished the day with a 12th-place result. Hildebrand, who missed qualifications because of a practice crash early Saturday, started at the rear of the field but was running as high as third position during the middle portion of the race. 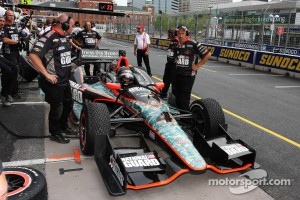 Hildebrand was later caught behind a slow car on a restart and then suffered damage to the front wing of his National Guard Chevy that ultimately sent the 24-year-old Californian back down to the middle of the grid.

Hildebrand started in 23rd position but wasted little time in climbing the grid, despite an avoidable contact penalty when he made contact with Bruno Junqueira during a pile-up on Lap 14. His subsequent drive-through penalty – the first of his IndyCar career – did little to slow Panther’s rise to the front of the grid.

The team elected to stick with its slick Firestone tires during what quickly became a tenuous portion of the race, as light rain conditions left several teams debating between staying on slicks or changing to rain tires. Between a series of caution periods Hildebrand passed his way up into the Top Three by Lap 33 just prior to another full-course caution for James Jakes, who stuck his No. 19 car into the tire barrier at Turn 12.

On the Lap 36 restart Hildebrand was stuck behind Takuma Sato, who was slow to take the green flag, allowing several cars to pass both Sato and the National Guard car. After yet another caution period, Hildebrand again damaged his front wing during a stack-up of cars on Lap 42 and had to make a lengthy pit stop for another nose that set the Panther team back to 17th position. Hildebrand spent the final stint battling with fellow American Graham Rahal before the race ended with the team in the 12th position.

With one race remaining in the 2012 season Panther travels to California Speedway, where in Panther’s history the team has captured two race victories (2002, 2003 with Sam Hornish Jr.) and in 2003 set the closed-course speed record for average speed during a race with an average speed of 207.151 mph.

The team last raced at California Speedway in 2005 with Tomas Scheckter and Tomas Enge in what – at the time – was Chevrolet’s last IndyCar Series race before returning this season. Scheckter led 80 laps in that race before finishing in the seventh position.

JR Hildebrand, No. 4 National Guard Chevrolet: “It was kind of a bummer of a day, things just didn't go our way towards the end of the race. We stayed out on slicks when it started to rain and that was definitely the right call. We got ourselves up into the top five legitimately, but we kind of got hosed on a restart; the pole sitter was kind of just sleeping on the restart and I got stuck behind him and couldn’t find a way around which put us into sixth or seventh.

We were looking to have a really good day and with five laps before we were going to pit, I clipped off the right side of the front wing and that just hosed our day at that point. I lost a few spots right there because of that, and then having to make the nose change in pit lane cost us an extra fifteen seconds, which at that stage put us behind all the cars we should have been ahead of.

I was al ittle overly aggressive at a couple points during the race and that ended up costing us. But the National Guard Chevy guys did an awesome job today, and that’s what makes it so disappointing. We picked the perfect strategy today and because I made a couple mistakes things just didn’t pan out.”