What do Cheever, fellow TV talking heads have to say about Kurt Busch’s “double” weekend? 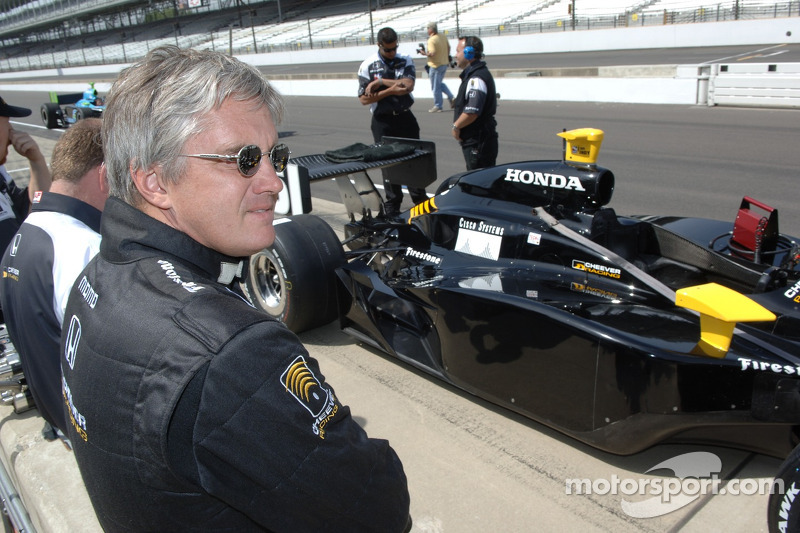 Eddie Cheever: 'I am totally impressed' with Busch's performance

In conference calls in the past few days, several motorsports broadcasters gave their opinions on NASCAR driver Kurt Busch and his attempt Sunday to race in both the Indianapolis 500 and the Coca-Cola 600 NASCAR Sprint Cup race later in the day at Charlotte Motor Speedway.

Eddie Cheever, ESPN analyst, Indianapolis 500 winner, Formula One driver, on Busch’s performance in the Indy car: “I am totally impressed by everything he has done in the car. Going out and turning into turn one when you’re up at speed, and engineers have told you, ‘Don’t take your foot off the throttle,’ you’re talking to yourself telling yourself it’s going to be okay. That’s a difficult moment even in a racecar driver that’s done it his whole life, to be committed to doing that. "He’s been incredibly fast. Every hurdle he got to, other than [the practice crash] when he got very lucky and hit the wall at the right angle. Other than that, I am just impressed. When he had to go out and do his qualifying run, that’s 230, that is really moving the mail. That’s fast. Turning into turn one at 236 miles an hour, and everybody said that the cars were sliding at the end of their run because they were so much on the limit trying to trim them out. He went and did it as if he’s been doing it his whole life.

"He is talented and incredibly brave. If he digests this last hit he had, it took me a long time to digest, if he can go through that, he’s in that leading group at the end of the race, I would consider him a possible top-three finisher, if he gets through all the problems during the race. But he’s been incredible. I’m very impressed.”

Allen Bestwick, ESPN announcer, on Busch’s attitude at Indy: “I think anytime you go someplace and try something new and different for the first time, have a little bit of success at it, you’re going to have a little pep in your step.

“Think about how much Kurt has hung himself out there by doing this. I’ll borrow Eddie’s thought about this. Here is a guy who is a NASCAR champion. All the race wins he’s accumulated. He was willing to put that reputation out there on the line for the world to step out and try and drive a type of racecar he’d never driven before.

“I’ve seen nothing but good things from Kurt. I see a guy who is determined to master it, has fit in very well with his teammates, has dug into the engineering, the aerodynamics, driving techniques, soaked it up like a sponge, acquitted himself very, very well in an IndyCar. I’m not surprised by that. We know Kurt is a heck of a racecar driver.

“I’m not surprised he’s acquitted himself well. He’s having fun. He understands the challenge ahead of him. He got a taste of the difficulty of that challenge yesterday. You can say he’s gotten the full Indy experience now.

“But I’ve seen nothing but smiles from Kurt. Why not, right? He had the guts to put himself out there and try this. He’s doing well. He has the opportunity to have a good, solid race experience on Sunday and do something he probably never thought he’d get the chance to do in his life. I can relate to that. It makes you smile.”

NBC analyst and semi-retired NASCAR driver Jeff Burton on the level of interest in the Indy 500 among NASCAR racers, and whether Busch’s split focus will hurt his NASCAR race: “Well, that’s a good question. You know, on a funny side, with the Indianapolis 500, the end of that race always happens right when the NASCAR drivers’ meeting starts.

“And for years we’ve asked if we could finish the Indianapolis 500 during that drivers’ meeting because the drivers, they want see the end of it.

“So you know, there is a tremendous amount of curiosity. You know, the racers are racers. I know drivers get up and watch the F1 race; they watch all of the Indy 500 that they can watch.

“You know, the only thing that I look at is I just don’t know how it doesn’t take a little bit away. You know, if Kurt was in the situation that he hadn’t won a race, he didn’t look like he was good in the points as far as being able to get in the chase, I would think that he would be under a fair amount of criticism for taking away from this Cup Program.

“So it’s got to be a unique situation where the car owner is 100% for it; he understands that it is going to be a distraction. There’s no way it’s not a distraction. And in some way, the Cup Program is being helped by it. Because ultimately, the sponsors and the car owner, you know, they’re there to win the Cup race.

“But you know, this is the fourth time it’s been tried. It’s going to be very difficult for anybody to be able to pull it off.

“The interesting thing about this is it’s kind of, you know, it’s always been the other way around where a guy was an Indy car racer who had gone Cup racing and now he was going back.

“Kurt has no Indy car experience. And for his first Indy car event to be the 500, that’s a lot – that’s a big deal. I think that’s going to be really difficult on him.

“But I don’t know. I just think it takes so much time away from the Cup thing to do it right. It takes commitment. I just don’t know how many people are going to raise their hand and want to do it because there’s just no way it can’t be a distraction from your Cup program.”

View from last row at Indy is better than nothing