In his 26th year working as a credentialed media member at the Greatest Spectacle in Racing, Jay Alley will share his thoughts and photos with Motorsport.com for the 97th running of the Indianapolis 500.

Opening Day at the Indianapolis Motor Speedway is just three days away and it could be an Andretti-Foyt shootout just like the old days. Only the players have changed and it's not Mario battling AJ but Michael and the rejuvenated Andretti Autosport five-car team going against Larry Foyt's surprising single entry. With today's announcement of an entry for 1996 Indy winner Buddy Lazier, the official entry list shows 34 cars with 33 drivers listed, so there may be some bumping at Indy this year after all, but the stories for this May are just beginning to unfold. Chevy powers 17 cars; Honda has 16. Penske has a three-time 500 winner in Helio Castroneves and so does Chip Ganassi's team - defending 500 winner Dario Franchitti. Both will attempt to add their names to the short list of four-time winners which now only includes four drivers. In the 97th running of the 500, Indycar racing has a chance to continue to build momentum on an already interesting season so far. A week of practice with two days to qualify will be more than enough time for the field to take shape and new stories to emerge. And I will be at the track every day for motorsport.com posting blog updates and photos in my 26th year working as a credentialed media member at the Greatest Spectacle in Racing. 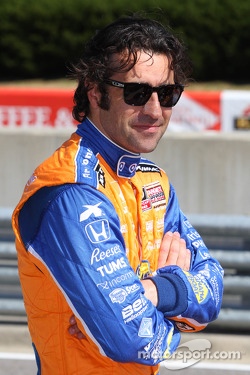 Having run four races in the IZOD IndyCar season so far and won three, clearly Andretti Autosport must be considered the favorite to win Indy. James Hinchcliffe snagged last weekend's race win in Brazil in daring fashion and has won two races for Andretti while Ryan Hunter-Reay took the pole and a road course win at Barber Motorsports Park. Either could win Indy with the right breaks. For Foyt, Takuma Sato got his first Indycar win this season and you just know Taku believes that he can win the 500 after a brave but failed attempt to make a last lap Turn 1 pass on Dario last year. Crashing while going for the win at Indy is nothing new but Taku has shown much improved race craft already this season which belies his history of being hard on equipment, so perhaps Larry Foyt has the right mix of people and equipment to make it happen this year.

Lest anyone think it's a cakewalk for anyone I've mentioned so far, please forget that thought. Roger Penske has the most successful team in Indy 500 history and he pulls out all the stops to win the pole and the race. Helio has shown his mettle as both a qualifier and racer at Indy, so no one should dare count him out even though Penske drivers have been shut out of victory lane so far this season. Helio will want to add a fourth ring of his own. Helio and teammate Will Power will be joined by AJ Allmendinger this May in Dinger's first attempt at Indy and Tim Cindric knows how to pull the strings for the team to be successful with no expense spared to get another Indy win.

Of course Penske's longtime archrival Chip Ganassi won't just roll over and cede Indy to anyone, even though the Target boys have had a miserable season so far by Ganassi's standards. With plenty of time to tweak and tune at Indy, I expect Dario to regain his form and he always brings his "A" game to IMS each May. Teammate Scott Dixon has one Indy win and they are joined this year by Ryan Briscoe, last year's pole winner for Penske. Surely Ryan has a something to prove this year as he settled for a top notch Indy-only ride after being left out in the off season shuffle for full season competitors.

Four former Indy 500 race winners (Castroneves, Franchitti, Dixon and Lazier) are entered along with four rookies, including Noblesville, Indiana's own Conor Daly, son of former Indycar and F1 driver Derek Daly, who will benefit immensely from being partnered with Sato in the second Foyt ride. Early season Indycar sensation Tristan Vautier has a steep oval track learning curve to overcome but time is everyone's friend at Indy when running hundreds of laps is possible in practice. Allmendinger may be new at Indy but he is not new to winning in open wheel competition so he will adapt quickly and could be a darkhorse contender to win in his first attempt at the 500 ala Juan Pablo Montoya. Carlos Munoz is the final rookie; he has has shown great speed in tearing up the admittedly thin Indy Lights ranks this season, so the Rookie of the Year battle will be an interesting competition. Add in veterans Tony Kanaan, Indy specialist Townsend Bell, Alex Tagliani, Marco Andretti and JR Hildebrand, plus three women (Ana Beatrix, Simona De Silvestro and Pippa Mann), this year's field may be light on numbers but it is diverse and heavy on talent as they prepare to race May 26th for the chance to add their faces to the Borg Warner Trophy and make Indy history. 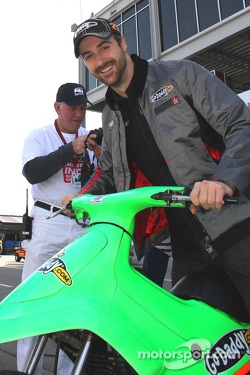 My personal favorite to win this year is James Hinchcliffe but right now I have to give the nod to his teammate Ryan Hunter-Reay who is the defending IZOD Indycar Series champion. He showed last season that he has the desire to do whatever it takes to get to the front and win and RHR has a great comeback story of his own. It could boost the Indycar series and the 500 if an American driver were to win this year. Of course everyone thought having an American season champion would create a buzz last year, but his series title was overshadowed somewhat by the handling of Randy Bernard's departure last fall so I'm sure Ryan would love to have the chance to drink the milk and remind everyone how far he has come in his racing career the last few years.

Don't take my prediction to the bank just yet as everything could change after I see how they actually run once practice gets underway this weekend. Needless to say it doesn't get any better for me than being at Indy in May. Regardless of the outcome on race day, I will be where I belong, doing what I love, hoping to bring some of that passion through to you in words and pictures. After all is said and done, I'm just a Hoosier who was bitten by the racing bug at an early age and there's no place better to scratch that itch than at the Indianapolis Motor Speedway. Come on out and join me!

"It was a dream come true" - Kurt Busch