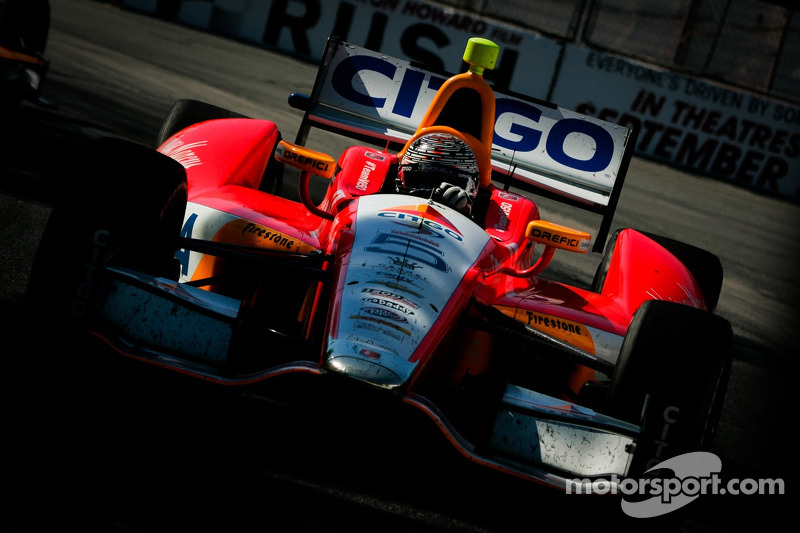 Ryan Hunter-Reay: "I don't think he [Will Power] drove into me on purpose, but we were taken out of the race."

Making his first standing start since racing in GP2 in 2007, E.J. Viso took the green flag from the straightaway of the 1.75-mile circuit in Toronto from the 10th position. The Caracas, Venezuela native was seen as high as second during the 85-lap race. 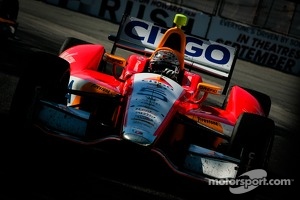 After multiple full-course caution periods, Viso came to the checkered under the third caution of the day in fifth, the 28-year-old's second top-five finish of 2013; he moves up two positions in the championship points standings to 12th place.

"Well, finishing P5 after starting 11th, I think, is a pretty consistent job. The team, the crew, the strategy - they helped me put it all together. I think it's about time that all these results start coming. I believe that performance has been there every single race, just lacking some results.

Now, heading back into street and road courses, I think the results will start coming again. We needed to stay on top of the game the whole race. The heat in Toronto today was pretty intense; we needed to battle with the tires degrading pretty fast.

I'm very thankful for the car that my team gave me today; I was able to do a pretty good job, they had great pit stops, and I'm just looking forward to the next street and road courses. Thanks to all of my supporters."

Marco Andretti drove the Dr Pepper Chevy to a top-10 finish today, his 11th of the season. Now ranked fourth in the championship title fight, Andretti started today's race from the 17th position and took the twin checkers ninth.

"We did what we had to today; I just wanted to finish. I think we messed the car up this morning in the warm up. What I thought was going to be a good car in warm-up turned out to be less grip than yesterday so we were just hanging on. The Dr Pepper car couldn't charge anywhere; we hurt the car on the brakes, so I was really tentative with braking. I couldn't make the passes I made yesterday, so we just hung in there. We managed a top 10 and will move on to Mid-Ohio in a couple weeks."

DHL driver Ryan Hunter-Reay entered the weekend second in points and made his first career standing start for today's 85-lap race from the fourth grid position. The reigning IZOD IndyCar Series champion ran up front throughout the race and was on target for a top-five finish when the No. 1 machine was collected in a Turn 1 incident just two laps before the checkered flag. Hunter-Reay recorded a 19th-place finish as a result of the incident.

"Will (Power) was coming out from the bottom. I had a good run going on the outside, I was right next to him and he just - he was sliding across the patch, I talked to him and he just said he got loose on the bottom and he just drove right up into us. There's two lanes going through (Turn 1), everybody kind of respects that and...

I don't think he drove into me on purpose, but we were taken out of the race. We had a good day going and had a decent car. We hung on today, that's what I was doing. I think we had a chance at a podium, maybe a fourth (place finish), I would have been happy with that. The DHL Chevy was a little lacking grip this weekend and we were just trying to hang out. Had a good race; I tried really hard to just keep it right there; got up to third at one point. But... we got taken out again."

James Hinchcliffe qualified his GoDaddy Chevy into the 11th starting position for today's second round of races on the streets of Toronto; however, made his race start from pit lane following a mechanical failure. Moments before the 24-car field rolled off pit lane to prepare for IndyCar's first standing start, the throttle pedal on the No. 27 stuck, preventing the car from shifting into gear. The GoDaddy crew quickly returned to the pit box and replaced the failed part. Hinchcliffe took the green flag three laps down and recorded a 21st place finish.

"The throttle stuck (on the start) - it's pretty simple. I was just going through the routine of the standing start, and as soon as I put my thumb on the throttle, it stuck 100% and that was about a minute before they gave the command (to start engines). We tried WD40, but unfortunately that wasn't the magic fix, and we had to replace the pedal and went three laps down right off the bat.

Then we had no yellows to help us out; we ran around in the back all day. Obviously gutted for the team and for GoDaddy, but more than anyone for the fans. It sucks for everyone that came out today... we were hoping for better in my hometown. But we weren't going to give up - I wanted to go out, finish the race and get any points we could."